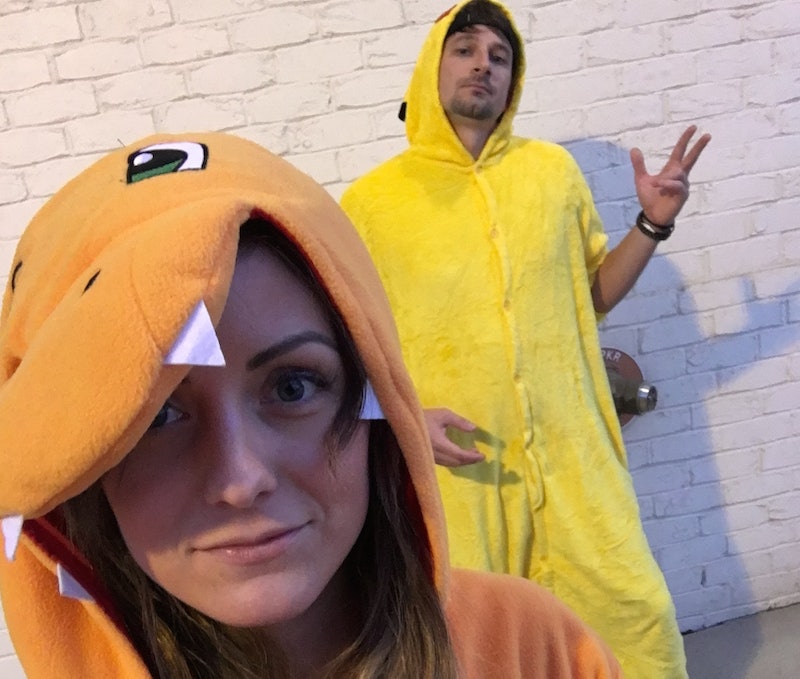 Over the course of Nick Viall's season of The Bachelor, Bachelor in Paradise couple Carly Waddell and Evan Bass will contribute weekly articles to Bustle about their friend's own journey to find love. Read Evan's take on the Jan. 9 episode below.

I'm at a loss to describe how painful it was to watch the Jan. 9 episode of The Bachelor — I could barely even tweet. I mean, we've all had awkward first dates, but The Bachelor whipped out one in which women had to watch each other makeout with the man they might marry while dressed like brides, and then followed it with a trip to the Museum of Broken Relationships, where contestants had to break up with Nick in an attempt to get a rose. Amidst all of that agony and irony, Nick and the other contestants questioned Liz and Corinne's motives for being there. And after watching season after season of this, you have to ask the question, does anyone go on The Bachelor for the right reasons?

The episode starts benignly enough with a date card that reads, "Always a Bridesmaid..." and, naturally, Corinne informs us that she's never been a bridesmaid. Because of course she hasn't. The whole date is a train wreck, aside from "Franco," the photographer, who takes pictures in the most ridiculous and awesome manner.

The women are mortified while watching Nick kiss bride after bride after bride. Elizabeth even scoffed that Nick "tastes like Danielle." At the end, Corinne takes full advantage of the date to flash her way into the forefront of Nick's mind by going topless and placing Nick's hand on her breasts as all of the other contestants gawk in abject horror.

I lived through an entire season of Bachelor in Paradise with Nick, so I know him well and I could tell that even he was slightly taken aback by where this date went. By the end of it, Corinne winds up with the group date rose while exclaiming, "no one has ever held my boobs like that."

Listen, I know many fans are pissed that Nick would give a rose to Corinne shortly after she "stole" him from other conversations a bunch of times, but at this stage in the game, he can only go by what he's seen. And he's seen Corinne be passionate and take charge. We all knew going into this that he's attracted to strong women who can be aggressive — and if you didn't, you do now. Corinne may have skipped a few steps, but you only have a few short moments to make an impression amongst almost two dozen other contestants, so clearly, she's making the biggest impression. Nick hasn't seen her ITM (In The Moment) interviews where she makes the borderline off-color remarks those of us at home get to see. We can't judge Nick too hard for this because, frankly, Corinne makes great TV.

Meanwhile, back at the ranch, Liz is opening up to Christen with the juiciest secret in Bachelor history: she has already slept with Nick. They had a one-night stand at Tanner and Jade's wedding. Christen gets all of the feels about this and can hardly contain herself. I was impressed she didn't tell any of the other women. I'm fairly certain that this may be the first time in Bachelor history that a contestant has kept a secret to themselves.

Not to be outdone by the first group date, the second features an equally bizarre and awesome "break up" date. The women have to do a little act where they let Nick go. Kristina's "oral health" break up was hysterical — I also re-watched the Josephine slap at least four times and it did seem legit. But Liz's breakup is the one that left all of America talking. She decides to be completely open and spill the beans about the hookup in front of everyone.

Nick is shocked. No one knows what to do — except Christen. She, like the rest of America, makes a bunch of fantastic shocked faces. Later that night, she has to let it out and shares with Nick what Liz told her and he is definitely worried. He probably thought he had a bit more time to control this narrative and assumed Liz would have enough sense to wait to tell everyone. But alas.

(DISCLAIMER: Being on The Bachelor is insane, hard, and stressful, so you shouldn't hate on Liz — or Corinne or Christen — for any of this. She is an awesome person and a free spirit, so she went with what felt right in the moment. She had just no idea that in Bachelor world, she was setting herself up for the dreaded rose of death... aka the mid-date sendoff.)

So, Nick confronts Liz and she doesn't do an awesome job of communicating. I actually felt bad for her. She wasn't expecting it all to go to hell in a hand basket. Imagine having three or four cameras and 10 people staring while you have to dissect a one-night stand in order to stay with a guy you don't know very well. It's so tough. Inevitably, Nick sent Liz home and she learned an invaluable lesson. What exactly that lesson is, I have no idea, but it's something.

In juxtaposition to all of this, Danielle M. gets a one-on-one date. It was actually incredibly sweet and with all of the drama going on, stands in stark contrast to the rest of the episode. Danielle opens up about her fiancé passing away and she and Nick experience the most real moment so far this season... before making out on a ferris wheel. She is super sweet and it's kind of beautiful to see something so real and genuine in the middle of all of the other drama. If Danielle doesn't end up engaged to Nick, she will clearly be a frontrunner for next Bachelorette.

But all of that brings me to my earlier point, why do people go on The Bachelor? Certainly, there are a fair amount of people looking for fame, and questioning contestants' motives has become one of the most fun Bachelor-related activities. But we've seen multiple genuine couples come out of these shows, so they really can lead to love. For most people, the Instagram endorsements and followers eventually wane, but those who truly look for lasting love often end up finding it. Think about Kaitlyn and Shawn, Jordan and Jojo, Trista and Ryan, Sean and Catherine, Jason and Molly, Ashley and JP, Desiree and Chris, Ben and Lauren... oh and ME AND CARLY.

Shawn Booth once told me that "it's insane to go on TV to find a spouse," so why do we do this to ourselves? For me, it's because I've always wanted an epic love story. On Jojo's season, I became something of a joke to most people and it was really hard for me. Carly had to deal with having her heart broken in the second season of Bachelor in Paradise. The Bachelor environment can lead to real, extreme pain and while most of the "villains" and less liked contestants tend to blame editing, they know that doesn't excuse most of their very real actions. That's what makes Nick different.

Despite not always being very liked, he never blamed any of that. He didn't take the easy way out for any of the times he looked bad. The frontrunners who are rarely challenged will always get the glory and mostly just love from fans, but I believe there is something special about people like Nick who don't come away feeling great the first (or second... or third) time around. He was able to use America as a mirror and it helped him to grow up, in a sense. Watching him now as the Bachelor, you can see him wrestling with the magnitude of dating multiple women.

We are very early into the season, but this episode has brought its first "To be continued..." and it'll be interesting to see what Nick thinks of Corinne when the other contestants inevitably throw her under the bus for being the "villain." I'm excited to see not only which one (or two... or three) of these women falls in love with Nick, but which contestants truly allow themselves to grow through this process for the "right reasons."