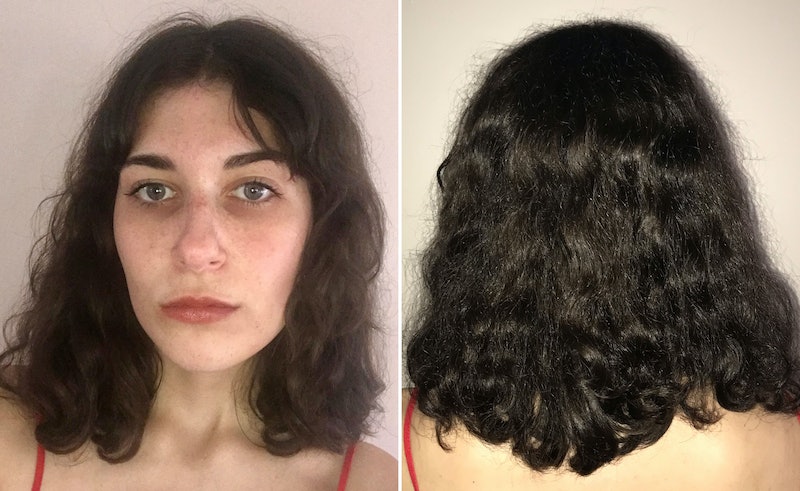 Everyone's probably heard the old wives' tales, but does brushing your hair 100 times really work? Google the phrase, and the word that pops up most is "myth." However, could there at least be some truth to it? I decided to try it and find out.

Brushing your hair 100 times a day is touted on the Internet as something that will leave your locks much shinier than they were before. You see, brushing is said to release sebum and remove dead skin cells, reportedly allowing your hair to look healthier and grow faster.

While it's a well-known fact that daily brushing can boost hair's appearance by stimulating the scalp's natural oils, some experts have denounced the 100 times method. Dermatologist Paradi Mirmirani told CNN that rigorous hair brushing doesn't make hair shiny or encourage growth. In fact, the doctor said that excessive brushing can actually cause unnecessary friction to the hair, resulting in breakage or at least some damage.

With that in mind, I was a little panicky about forming such a close bond with my hairbrush for a few days. But there's no better way to test a theory than by seeing the effects for yourself. So, I powered through.

A little disclaimer before I explain how I got on: I actually don't brush my hair every day (sorry mum). There are two reasons why. Firstly, I'm incredibly lazy and attempt to get ready each morning in no longer than 20 minutes. Secondly, because my hair is so thick and curly that brushing it only seems to create an unmanageable ball of frizz. I usually brush it after it's been washed to detangle the mane and then maybe run my hands through it if it feels a little knotty.

My hair wasn't looking its best when I started this little experiment. Several weeks of constant heat and humidity had taken its toll, and resulted in a dry frizzy style that was usually tied back and hidden away from view. So I obviously thought that it couldn't get any worse.

However, the first time I tried to brush my hair 100 times was hard. I don't know what previous generations' physical fitness levels were like but I definitely don't have the upper body strength to do that kind of thing on a regular basis.

After getting about halfway through, I had to stop for a little breather. Pathetic, I know. Then,, after all that, once I was done, I genuinely couldn't see much of a difference — except for the fact that I was now resembling a lion.

But onwards and upwards to the next day. By this point, my body had clearly gotten used to the brushing motion and, while I was still no Popeye, I could get through 100 strokes without feeling like my arm was about to fall off. Hair-wise, I suppose it looked a little shinier (although it's hard to tell if that was just grease considering the hot and sticky weather).

On the third day, I cheated a little and had a haircut. Everyone knows that a quick trim automatically makes your hair look a million times better than it did before, so I can't really attribute this to my newfound brushing technique. However, I washed it the very next day, putting me right back at square one. Now, I had a much shorter ball of frizz to contend with.

I carried on with the excessive brushing for a few more days and honestly, I do think that my hair had a bit of a shinier look towards the end. But I was also losing a lot of hair in the process. Having thick hair means losing a few strands isn't a life-changing process, but the amount that was left on the brush was definitely more than normal. I'm not sure whether this was down to the brush causing my hair to break or whether I was simply examining it more than I usually do.

With that in mind, would I carry on with this 100 times a day malarkey? Well, I haven't been, so the answer is no.

My hair may have looked marginally better, but the sheer effort that comes with spending a good 15 minutes with a hairbrush means that that isn't enough to convince me. Unless the result is astounding, I'll stick with the lazy option, thank you very much.