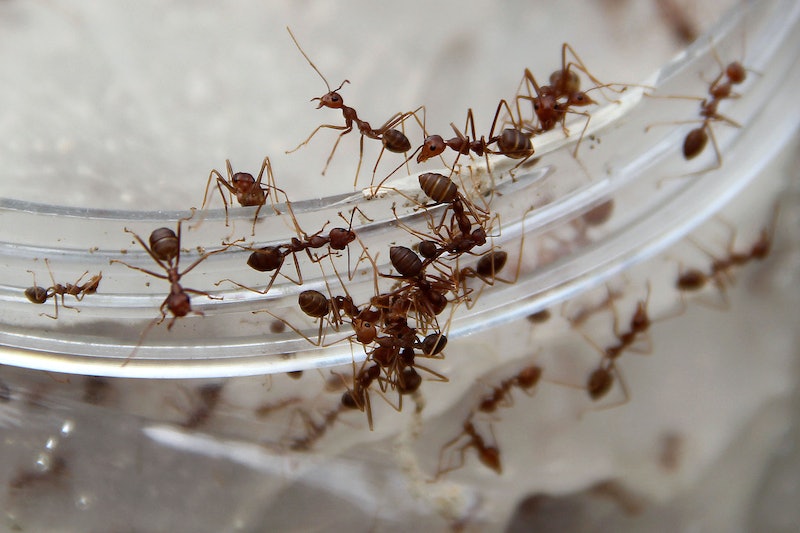 It's summer, which means whether you're at a picnic, chilling in your yard, or (worst of all) lying in your own cozy bed, there's a chance an ant may just be waiting to invade your space. OK, so maybe ants aren't that sinister, and most of the time they cross our path while just going about their own busy little ant business, but it can definitely feel like they're out to get us. Which is why this incredibly weird hack for keeping ants away, which is going viral on Twitter, is going to be your new — though unfortunately temporary — bug repelling BFF.

Twitter user @ChristineFox_ inspired a Twitter moment by tweeting July 3 that ants hate chalk. "Draw a chalk ring around your drink or outline your coasters and they won’t cross the line," they suggested, with a couple of photos of chalk lines and some very confused ants.

Let's get one thing straight: ants do stop when they encounter chalk lines. But unfortunately, this isn't Supernatural, and ants aren't vengeful spirits you can ward off with a salt (er, chalk) line. According to The Mercury News, a San Jose paper that did us all a favor by investigating animal myths, chalk doesn't have any magic ant-deterring properties. In fact, "anything that disrupts the scent trail will briefly stop the march of ants," reporter Joan Morris wrote. So a chalk line that interrupts the scent trail they're following on their way to your plate of summer BBQ and beans will leave them confused, but according to Morris, "[i]t doesn't take long, however, for the ants to continue their quest."

Other Twitter users chimed in in response to @ChristineFox_, with one tweeting, "Found this out on accident the other day when I drew the alphabet in sidewalk chalk on my front sidewalk for my kid. The ants outlined each letter as to not cross over the chalk."

"This is genius. As an added bonus, one could also keep children occupied as a pest control force, were one so inclined," another tweeted.

Though many folks seem to be discovering the ant-chalk myth for the first time, it does go back a ways. Morris reported that this particular myth may have roots with insecticidal chalk, which is illegal, but made in China and sometimes imported to the U.S. (again, illegally). "The pesticide in the chalk is untested, unlabeled and unregulated, making it a potential health threat, especially to children who might play with it as if it were regular chalk," Morris wrote.

It should be noted that other outlets had a more favorable view of chalk repelling ants, like SFGate, which reported that "[a]nts prefer not to walk through a line of powdery material such as chalk dust, talcum powder or diatomaceous earth. Chalk is made of calcium carbonate, which is essentially ground-up seashells." SFGate mentioned scent as well, reporting that ants won't cross a chalk line "because it interferes with their ability to follow scent trails left by other ants."

Another, related myth The Mercury News investigated is that ants won't cross a line of cinnamon, which may hold a bit more scientific truth than chalk. Morris reported, "Researchers have experimented with cinnamon oil and found it has some insect-repelling properties. However, as one entomologist pointed out, ants can crawl and climb, and they can easily find a way around the cinnamon. It does make your house smell nice, though."

While a lot of this info is a little down on chalk, as shown by @ChristineFox_, it definitely does work for at least a temporary period of time, so if you're chilling with the kiddos and doing sidewalk art, drawing a circle around yourself so you won't find any unwelcome guests making their way up your pants leg is totally viable. And as for your house, there are other non-chemical repellants you can make use of, including super groovy bug-repelling houseplants that are pretty and useful.

Here's to an as-bug-free-as-possible summer!

More like this
Here’s How To Make The Spotify Music Festival Lineups Taking Over Instagram
By Alexis Morillo
You Can Save Up To 40% Off On TikTok’s Favorite Products This Black Friday
By Kristine Fellizar and Alexis Morillo
How To Use TikTok’s Voice Filters To Sound Like A Cat, Robot, & More
By Alexis Morillo
Dorinda Medley Has Holiday Hosting Down To A Science
By Brittany Leitner
Get Even More From Bustle — Sign Up For The Newsletter