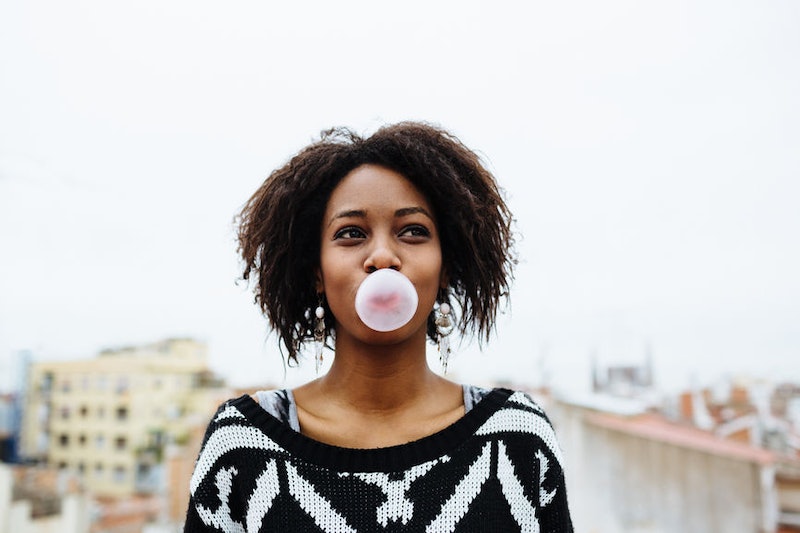 If you searched every woman's handbag in the UK, chances are, you're going to stumble across a fair few packets of chewing gum. Let's face it; we are a nation in love with gum. However, our addiction to the sticky stuff could actually be causing some unexpected side effects. You've probably heard the rumours, but does chewing gum chewing gum really cause wrinkles?

In a nutshell, yes it does cause fine lines to appear on your skin. Imogen Bexfield, the founder and medical director of White Swan Aesthetics, told Glamour: "Repeated facial expressions like smiling, squinting, or frowning do leave marks on your skin over time and chewing gum excessively can have an impact on these fine lines — particularly on and around the upper lip area which can contribute to wrinkles."

I think the operative word here is "excessively". Chewing one piece of gum a day isn't going to permanently alter the texture or appearance of your skin. However, you could face such an effect over time with "excessive" chewing.

Dermatologist Mary Lupo also brought up a rather interesting fact. In an interview with Allure, she explained how chewing gum (again, excessively) can actually alter the overall shape of your face. She explained to the publication that "enlarging of the masseter [the muscles either side of your jaw that control chewing]" is also a side effect from chewing gum, which can result in a "very squared jawline." Of course, there is nothing wrong with a squared jawline, however, it is worth noting that excessive chewing can literally change the shape of your face, which is an outcome not everyone may want.

So are there any other fascinating side effects that come from chewing gum? Yes, actually. And it's not all bad either. As Healthline reports, gum has the ability to help with memory, alertness, and decision-making. Some believe this is because the action results in increased blood flow to the brain, although there is no conclusive answer.

However, several studies have proven the above theory. One, carried out in 2002, found that those who chewed gum during a test saw a short-term memory improvement of 24 percent, and a 36 percent improvement when it came to long-term memory. There is also evidence to suggest that gum can help reduce stress levels.

Along with the muscular and skin changes detailed above, there are a couple of other things to take into account. Experts believe that excessive chewing can lead to a jaw issue named temporomandibular disorder (or TMD for short). This isn't classed as a serious problem but the resulting pain and discomfort can make it hard to eat and sleep at night.

And if you regularly suffer from headaches, you may be more prone to migraines or tension headaches when chewing gum, according to a 2015 study.

Nowadays, it seems like every normal action comes with a bunch of conflicting information. As with everything, the main thing to take away from all of the above is to chew gum in moderation. Restrict yourself to one pack a week and you're (probably) good to go.