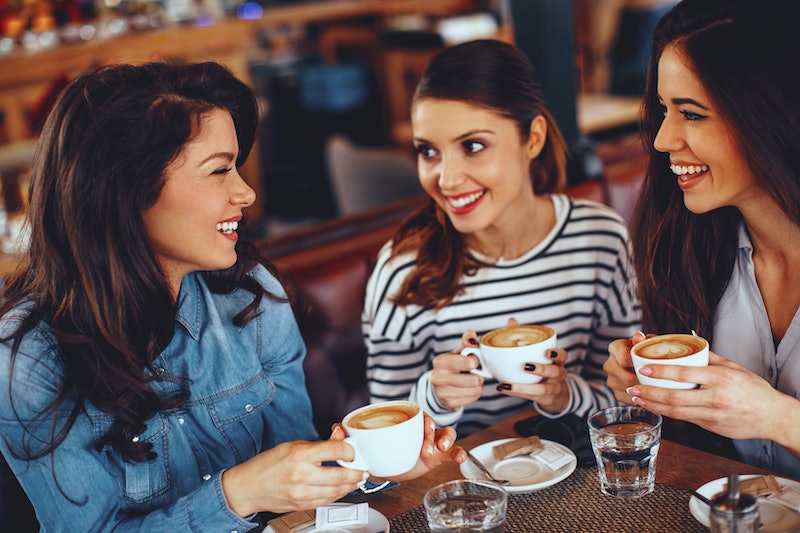 A delicious cup of coffee is the first thing many people look forward to each and every day. Hot or iced, with flavoring or without, homemade or purchased at a cafe, a cup of joe is a daily necessity for a huge amount of people across the world. Because of this, science is constantly looking into whether coffee is good or bad for you, and there are always conflicting reports out there, with some researchers claiming it can increase anxiety or cause insomnia, among other potential drawbacks. But the good news is that there seem to be just as many health benefits to coffee as not-so-healthy aspects; New research shows that drinking any kind of coffee can boost your chances of living longer, and I'm definitely here for that kind of news.

The study, which was published this week in JAMA Internal Medicine, found that drinking coffee can increase your changes of a longer life — even for those people who drink about eight cups a day. Researchers looked at almost half a million British adults and found that coffee drinkers had a slightly lower risk of death over 10 years than non-coffee drinkers. According to the Associated Press, this is the first large study to show a benefit even in people with genetic glitches affecting how their bodies use caffeine.

Researchers looked at men and women ages 40 to 69. Participants filled out questionnaires about their daily coffee consumption, exercise, and other habits. They also went through physical exams, like blood tests. Most of the participants were coffee drinkers: almost one-third drank two to three cups of coffee a day, and about 10,000 drank at least eight cups a day.

During a decade of research, the study found that coffee drinkers were about 10 percent to 15 percent less likely to die than those who didn't drink coffee. There were only slight differences by amount of coffee consumed, and the longevity boost was seen with instant, ground, and decaffeinated coffee. While coffee is thought to cause high blood pressure for some people, this study found that coffee drinkers who participated didn't have higher risks than nondrinkers of dying from heart disease and other blood pressure-related causes. And while coffee drinkers were more likely to drink alcohol and smoke, researchers found that the coffee seemed to cancel these factors out.

This isn't the first time a study has found that coffee can increase your chances of living longer. A study from January 2017 found regular coffee-drinking could have a positive effect on your immune system. Another study from 2015 found that coffee drinking could lead to lower mortality rates. And another study found that people who drank two to four cups a day had an 18 percent lower risk of death than people who did not drink any coffee at all.

Despite all of this research, scientists still aren't sure exactly why coffee might increase your time on this earth. There are plenty of thoughts, though. Coffee has been shown to help protect cells from damage, and some studies have shown that coffee might reduce inflammation. Other research has found that coffee might help improve your liver, protect against heart disease, protect against diabetes, and maybe prevent dementia. These are all things that could help you live longer. The Associated Press also pointed out that coffee is something that makes people happy each day. Positive emotions have positive effects on your health, so that could have an impact as well.

Now, this doesn't exactly mean you can replace your entire self-care routine with drinking countless cups of coffee. Alice Lichtenstein, a Tufts University nutrition expert who was not involved in the research, told the Associated Press that while these study results are a good thing for coffee-drinkers, they're also not a reason to start guzzling down coffee. She added, "It's hard to believe that something we enjoy so much could be good for us. Or at least not be bad." I'll take my coffee with room for "not bad," thanks.

More like this
Got Brain Fog? Here Are The Best Supplements For Memory & Cognition
By Carolyn Steber
This Psychological Effect Might Be Keeping You From Hitting Your Goals
By Lexi Inks
I Tried The Air Up Water Bottle, Which Flavors Your Drink With Scents
By Carolyn Steber
How Yin Yoga Delivers TLC To Tight Muscles
By Carolyn Steber
Get Even More From Bustle — Sign Up For The Newsletter