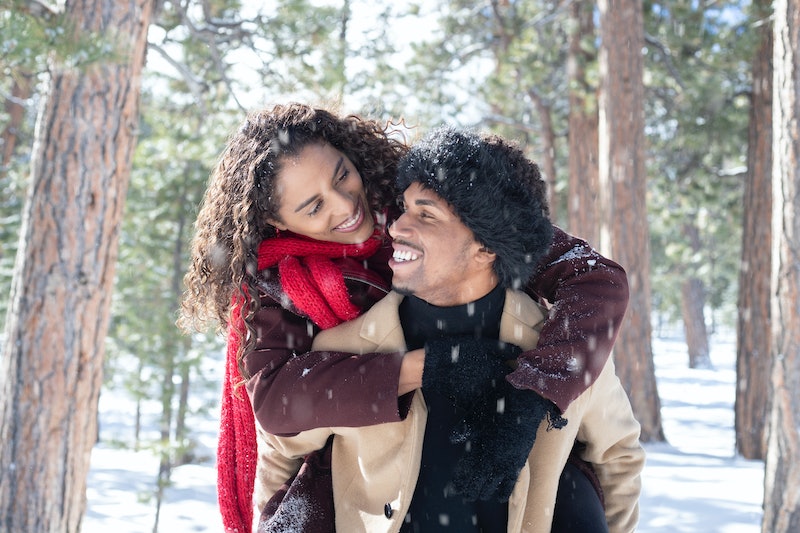 When it's cold outside, you might feel inclined to stay inside — preferably, under the covers with somebody cute. Anecdotally, cold weather seems to have some effect on sex drive. For one piece of data, it's estimated that more babies are conceived on December 11 than in any other day of the year. But studies also show winter can actually mark a low period for your libido, where you feel less enthusiastic about sex in general. So what's the deal?

"Libido is a complex state," Dr. Felice Gersh, M.D., an OB/GYN and author of PCOS SOS, tells Bustle. There's still a lot researchers don't know about the tie between libido and our environments, so it's important not to make generalizations about weather and sexuality. "The ambient outdoor temperature does play a role," says Dr. Gersh, "but it’s one of many factors."

One possible cause of a dropping sex drive in winter, she says, is testosterone. Testosterone has been shown to have a strong link to your libido; the more you have, the more sexual desire you'll feel. "Testosterone tends to be highest in the fall and lowest during the summer," Dr. Gersh tells Bustle. Winter heralds the time when testosterone starts to fall from its autumnal peak, so you may feel comparatively less motivated to have sex when it's extra cold.

Estrogen also plays a powerful role in libido, and research shows that it tends to peak in the summer and lower in the winter in bodies with female reproductive organs. Not everybody goes through these hormonal fluctuations, though: If you're on continuous hormonal contraception, for instance, your testosterone and estrogen levels can remain pretty constant throughout the year. So this seasonal fluctuation may affect some people more than others.

Another element of the puzzle, Dr. Gersh tells Bustle, is sunlight. "Cold weather season is accompanied by shorter days and less sunlight," she says. That means our vitamin D levels will drop, and that can cause lower levels of testosterone production, lowering libido levels. Some researchers, she says, believe that testosterone is highest in the fall because of the build-up of vitamin D over the summer months as we spend time outside in the sunshine.

There are also more practical reasons for cold weather to kill libido. "Cold weather is associated with wearing more clothing, which is less seductive," Dr. Gersh says. She adds that lower levels of sunlight exposure and shorter days can have a negative effect on mood and sex drive, particularly in people who are prone to seasonal affective disorder. If you're feeling blue, you're less likely to have a high libido. Summer, by contrast, is associated with higher sex drive because of longer days and more sunlight (and less clothing).

Many people might experience a slight lowering of libido in the cooler months, thanks to the combination of hormone fluctuations, vitamin D levels, and the fact that wearing six layers of clothing isn't very seductive. This isn't a golden rule — and it's clear that there's a lot of room to maneuver on the topic. If you are experiencing a bit of a dip in your bedroom enthusiasm, it's a good idea to make some hot chocolate, enjoy your lover's company, and wait for the sunlight of spring.