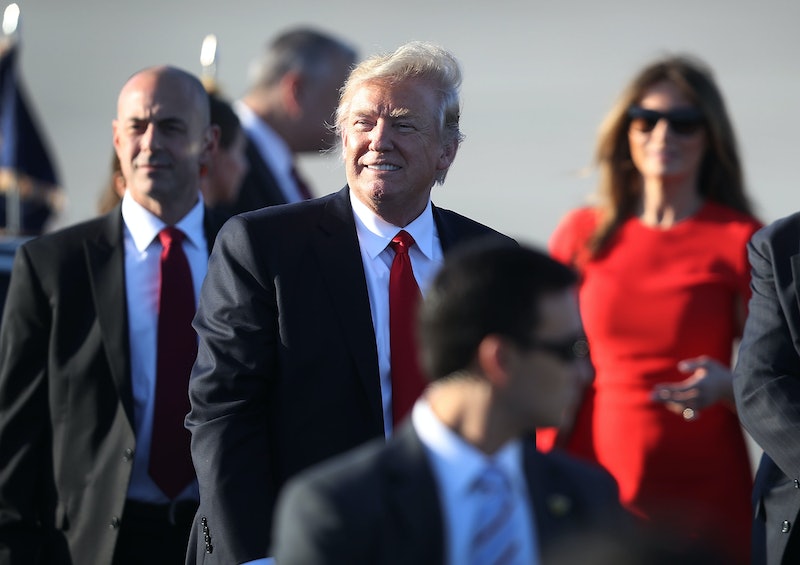 While the Super Bowl is a distraction from politics for many Americans, President Donald Trump is still top of mind. Many are wondering: is Trump rooting for the New England Patriots in the Super Bowl? It's no secret that Trump has great affection for at least certain members of the Patriots.

As Mark Lebiovich noted in a story last week for the New York Times, the president is friends with the the Patriots' star quarterback, Tom Brady, and the team's coach, Bill Belichick, as well as the team's owner, Robert Kraft. But Leibovich argued the connection between Trump and the Patriots went even further, "Like Trump, the Patriots are a divisive juggernaut that tend to engender strong passions for and against."

During his interview with Bill O'Reilly, Trump praised the Patriots, but hesitated when asked if he was "rooting" for them. "I think the other team is fantastic though. No I think it’s a fantastic team, turns out to be a good quarterback," Trump told O'Reilly. He then added, "But you know there’s less pressure on the Patriots because they’ve been there. You know once you’ve won, and you’ve done it, and they’ve done it, once you’ve done it there’s a lot less pressure. So we’ll see what happens."

However, Trump ultimately concluded, "but you know you have to stick up for your friends, right?"

O'Reilly then asked the president for his prediction on who he thought would win Super Bowl LI. Although Trump said "I hate to make predictions," he told O'Reilly he believed the Patriots would win by eight points.

In 2015, Brady was photographed wearing a "Make American Great Again" hat. When he was asked if he thought Trump could win (this was in September 2015, when many experts doubted Trump would even snag the Republican nomination, let alone the White House), Brady responded, "I hope so. That would be great. There'd be a putting green on the White House lawn. I know that."

Many, included Trump, took Brady's comments to be an endorsement:

However, shortly thereafter, Brady pushed back and said the comment was "taken out of context." Brady has been asked repeatedly about his friendship with Trump since then, but he has been cagey about saying too much and avoids commenting altogether. “Why does everybody make such a big deal? I don’t understand it,” Brady told WEEI Krik and Callahan Show when asked about his relationship with the president after winning the AFC championship.

While Brady and other members of the Patriots may have shied away from playing up their ties with the president, Trump hasn't. In fact, he's made it clear he thinks he's an asset for them. When O'Reilly asked Trump how he felt that members of the Patriots are "taking a lot of heat" for their relationship with the president, Trump countered, "you know what they’re also getting a popularity of it. I think they’re going to do very well. Tom’s a winner. "