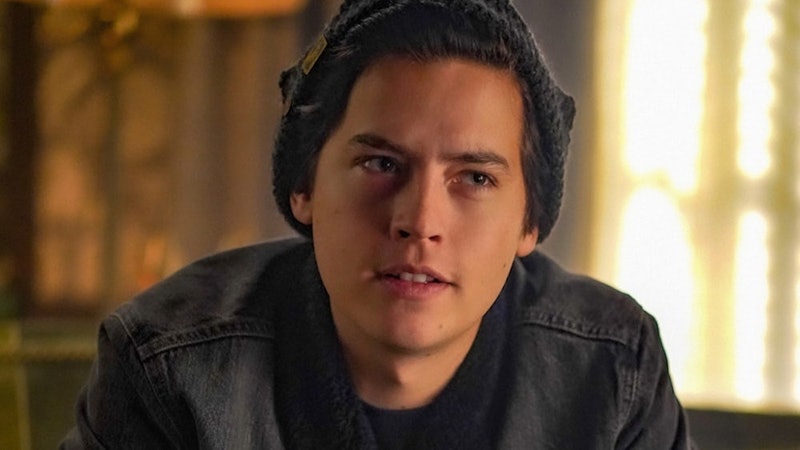 Yet another suspect has emerged in the long-teased mystery of Jughead's death on Riverdale. Though the show has positioned both Betty and Bret as potential culprits throughout Season 4, it's now looking more and more likely that Donna killed Jughead. She may come across innocent, but that should have been the first clue: the number one rule on Riverdale is that no one can be trusted.

At the end of Riverdale's Feb. 5 episode, Betty broke into Stonewall Prep to try and steal the VHS tapes Bret had been storing there. Betty was under the impression that they were sex tapes Bret had secretly filmed of other students (including her and Jug), but Bret claimed they were videos of Quill & Skull members confessing their secrets during the club's initiation process. Unfortunately, Betty was caught before she could leave the school with all of the footage, but she did manage to sneak Donna's tape out — and it revealed something unsettling.

On the tape, Donna recalled the same exact story she told Betty about Mr. Chipping almost word-for-word, except in this case she was referencing a completely different teacher named Mr. Kotter. The identical accounts made it seem like she had been lying about her affair with Mr. Chipping, and it's then that Betty started to wonder if she and Jughead have been targeting the wrong person all along. Perhaps Donna, not Bret, is the mastermind behind whatever is happening at Stonewall.

Right now, there's nothing linking Donna directly to Jughead's (supposed) death, but if he and Betty start digging into Donna's past and she finds out about it, there's no telling what she may do to exact vengeance. Clearly, there's a lot about this character that we don’t know.

Riverdale fans have been expressing their suspicions about Donna on Reddit for months, with many thinking she was lying about Mr. Chipping long before Betty discovered this video. However, several people were also justifiably upset with the show for introducing a #MeToo storyline that suggests the accuser is lying.

However unfortunate the approach, that seems to be the direction the series is taking. Bret may be the most obvious suspect in Jughead's death, given their ongoing rivalry. But when has Riverdale ever done what's expected?