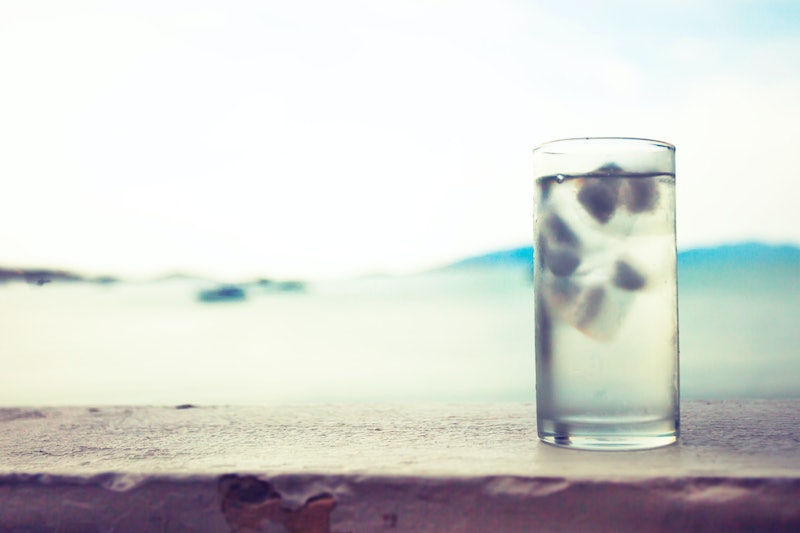 I have a friend who barely sweats when she works out, and TBH, I really don't get it. She looks like a goddess when she leaves the spin class we do together weekly, while I on the other hand, am I sweaty, tomato red mess. She's even got to the point where she's stopped bringing in water to classes, supposedly to encourage her to sweat more. Which sounds totally counterproductive if you ask me. But does it work? Does drinking water make you sweat more, or less? It's an interesting one, so let's take a look at the evidence.

Interestingly, the first opinion I came across actually suggests that the more you drink, the more you sweat. Professor Mark Whiteley, a consultant vascular Surgeon at The Whiteley Clinic, London, treats patients who have hyperhidrosis: a condition that results in excessive sweating. His diagnosis is usually tied to the notion that those who have hyperhidrosis are sometimes just drinking too much water.

"Lots of advertisers advertise water and say you have to drink two or three litres a day. That’s medically incorrect. If you go to intensive care you will be but on 1.5 litres of fluid per 24 hours," Whitley told The Daily Mail.

"If you drink more, your kidneys have to work extra hard to get rid of this fluid load. Then you sweat it out, which makes people sweat even more."

The NHS currently advises that you should drink between six and eight glasses of water a day in the UK, which equates to about 1.2 litres, which lends this advice some weight. Obviously drinking water is super important, but it could be the case that if you go overboard, you may find yourself sweating more.

However, it is crucial to not interpret this advice as meaning that you should not drink more water when you're sweating. Sweating is one of the most common causes of dehydration, meaning you should always top up your fluid intake after any excessive sweating to ensure you are properly hydrated. For this reason, this whole thing is a bit of a Catch 22.

But what about when you're working out? Is it the case that not drinking water while you work out can promote more sweating, as my friend believes?

Well, not really. Sarah Elliott, Ride Instructor at Psycle spin classes and founder of Vault Coaching, says that there is little relation to how much water you drink and how much you sweat during exercise: "From what I have found, the two are not correlated," she explains.

"The amount that you sweat during a workout is dependant on your cardiovascular endurance, as well as your genetic build up. These are the two elements to consider not related at all to your intake of water."

She tells me: "There are certain types of exercise where you would naturally sweat more, like Psycle, so as an instructor, I would recommend replenishing your body not just during and after the class, but beforehand. There's greater risk of fainting and not being able to regulate your body's temperature if you go into a class dehydrated. We need to promote better hydration in sports such as indoor cycling."

So, in short, it's important not to limit yourself in terms of drinking water in life regardless of how much you sweat, especially while working out. But on the other hand, try not to overdo it, and stick to the NHS's daily recommended amount of six to eight glasses of water a day in order to potentially avoid excessive sweating.