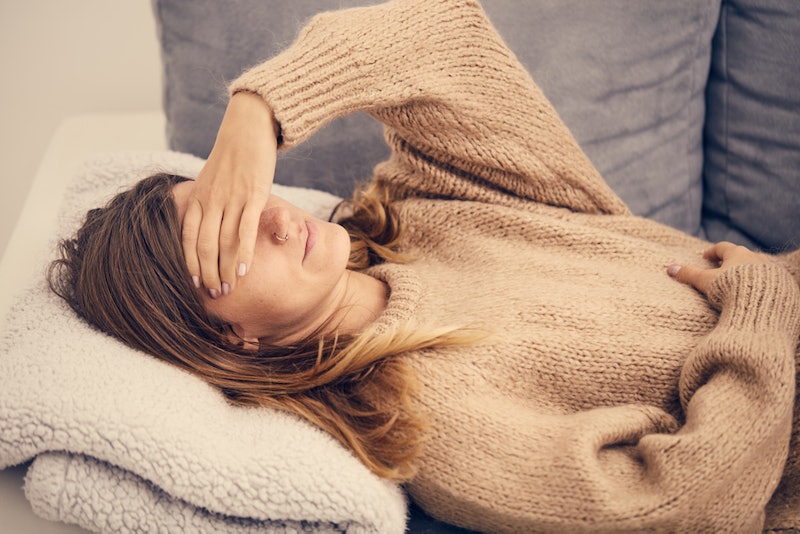 Myriad studies have confirmed that body and brain health are closely intertwined. For example, there's extensive evidence to suggest that mental illness can manifest in your body as chronic pain. Now, a new study reports that bacteria in your gut and your mental health are also related. The study, published in the journal Nature Microbiology, found that people living with depression were found to have lower levels of the gut bacteria coprococcus and dialister, The Guardian reported. While the findings are preliminary, the study predicted that probiotics could eventually be seen as a potential treatment method for depression.

A 2015 study published in the journal Clinical Psychopharmacology and Neuroscience about the relationship between gut and mental health came to similar conclusions and suggested that the connection will be studied extensively over the next 10 years. "Recent research has suggested that the gut microbiota has an influence on mood. Poor diet is a risk factor for depression; thus, a healthy diet may prevent depression. Regulation of the gut microbiota using diet, probiotics and FMT [fecal microbiota transplantation] may have important benefits for preventing and treating depression," the study concluded. In general, the causes of depression and how to best treat it are still a mystery. While there are myriad medications to treat depression, they don't work for everyone.

Treating mental illness requires an individualized treatment plan, and being able to potentially get help from dietary changes or probiotics is promising for those who've struggled to find relief from other kinds of treatment. One of the most interesting things about the findings is that those who had low levels of coprococcus and dialister reported higher levels of depression — regardless of whether or not they were being treated with antidepressants. On the other hand, people who were identified as having high levels of coprococcus and dialister gut bacteria reported higher levels of overall wellbeing.

What's more, researcher Jeroen Raes of the Flanders Institute for Biotechnology and the Catholic University of Leuven told The Guardian that these bacteria may even be able to communicate with your brain. "We studied whether gut bacteria in general would have a means to talk to the nervous system, by analyzing their DNA," he explained. "We found that many can produce neurotransmitters or precursors for substances like dopamine and serotonin." Ian Sample, writing for The Guardian, noted that this study does not necessarily imply a causal relationship between gut health and mental health. "It is possible that the effect works the other way around, with a person’s mental health having an impact on the bugs that thrive inside them," Sample wrote.

Further, because testing hasn't been completed in humans beyond comparing self-reported mental health assessments and identification of existing gut bacteria of participants, researchers can't say definitively whether or not this communication affects mental health. Raes told The Guardian that the next step is growing the bacteria in a lab, testing them on animals, and boosting them with probiotics before moving on to human trials.

Despite the fact that this is considered new research, the 2015 study reported that the first known case of treating depression with probiotics was in 1910. As research continues to evolve, the idea that probiotics could be a potential line of defense in treating depression is promising news for those who are sensitive to medications or haven't found relief through their current treatment plans.