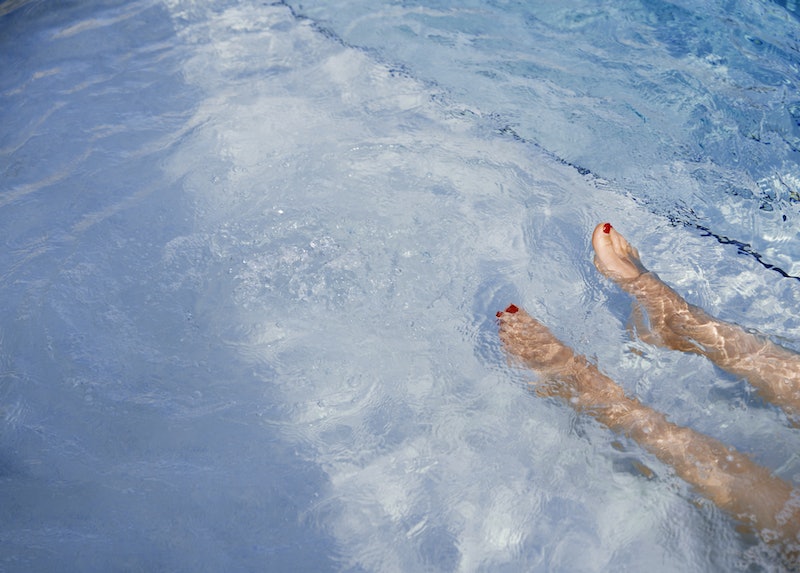 The days get warmer, the sun gets higher, and suddenly you feel like doing precisely nothing and lazing about in the heat all day. No, you're not imagining it: hot weather does make you a bit lazy, at least when we're first adjusting to the heat wave. "When the weather turns warmer, a lot of people start to feel more lethargic and less productive," Nancy Molitor Ph.D., clinical assistant professor of psychiatry and behavioral sciences at Northwestern University Feinberg School of Medicine, tells Bustle. So it's not just that you're feeling sluggish for no reason; it's science.

The reason all we want to do during the summer is marathon Netflix in front of a box fan has to do with our internal temperature regulation, our reaction to natural light, and a host of other factors. But it's important to note that this often isn't serious enough to make you feel tired all the time. If you feel lethargic over the summer, it could be something more serious than a bit of slowness due to hotter seasons, and it's a good idea to get it checked out by a doctor.

But if you're experiencing more laziness than fatigue, there are a few reasons why that might be. Humans, like all mammals, have internal temperature regulation systems. They're what make you sweat, shiver and feel feverish. And operating that temperature regulation requires energy. It's not just a matter of sticking your tongue out and panting, like dogs do; it's a complex balance of hormones and metabolism that requires fuel, which for humans comes from glucose.

Whatever you try to do in hot weather, whether it's exercising, trying to complete a spreadsheet, or simply walking around the block, you're expending more energy, because your body is using your glucose stores to keep you cool. This is part of the rationale behind exercise crazes like hot yoga, though science indicates that there isn't any real health benefit to putting yourself in a boiling room while exercising. Hot weather makes you more tired because you're spending more internal resources. "Exposure to prolonged sunlight can also lead to dehydration, which increases lethargy," Molitor tells Bustle. You actually adapt pretty quickly to hot weather, though, so this effect doesn't tend to feel extreme after the first week or two.

Summer may make you expend more energy, but bad weather actually makes you more productive. A working paper published by Harvard Business School in 2012 found that workers spend more time in the office and produce more work on rainy days than they do on sunny ones. This makes perfect sense to anybody who's ever spent time in an office; why would you bother sending out yet another boring email when there's an excellent sunny day waiting for you?

But there's also an apparent science behind these productivity drops. It turns out that hot weather negatively affects our cognitive processes. Studies have shown that people are more capable of making rapid, accurate decisions when they're in colder temperatures. A study published in PLoS Medicine in 2018 found that the warmer the environment was, the less capable people were at cognitive tests: choosing the best cell phone plan, assessing the risks of a lottery ticket, or picking a good deal. When things get hot, people become slower, more conservative thinkers who tend to assess factors incorrectly. These changes happened when the ambient temperature only shifted by a few degrees, because the energy resources used by temperature regulation are being taken away from the brain.

And speaking of energy: Does hot summer weather make you want to take a nap constantly? If you feel like falling asleep earlier in the summer months, it's both a reflection of your higher energy use and a reaction to changing light. Humans have a circadian rhythm, an internal body clock that tells us when to wake up and when to sleep using hormones like melatonin. It's influenced by many factors, but one of the major ones is seasonal light. And in the northern hemisphere, summer means that mornings get lighter earlier. "Scientists think the increase in sunlight disrupts melatonin production, which contributes to fatigue," says Molitor.

If you happen to sleep in an area that gets natural light, you may find yourself waking with the sun as your circadian rhythms adjust to the new regime — and in summer, that will get progressively earlier in the day. Result? You'll spend more hours awake, burning a lot of energy glucose. And by early evening, far before your usual winter bedtime, you'll likely feel like turning in, even if it's still light outside.

"A small subgroup of people don’t just become tired during the summer months," Molitor tells Bustle. "They actually become depressed due to a condition known as Seasonal Affective Disorder Summer Variant, or Summer SADS. It’s more common in people living close to the equator and in the southern parts of the U.S." Seasonal affective disorder isn't just for people experiencing drops in mood during colder seasons. "Those with Summer SADS often find relief by staying indoors during midday and avoiding direct sunlight, or by visiting more northern parts of the country," says Molitor.

If you're experiencing a depression that seems related to the weather, don't just put it aside. Go visit a GP or a therapist who can help you figure out what to do about it — and try not to get too much sun.