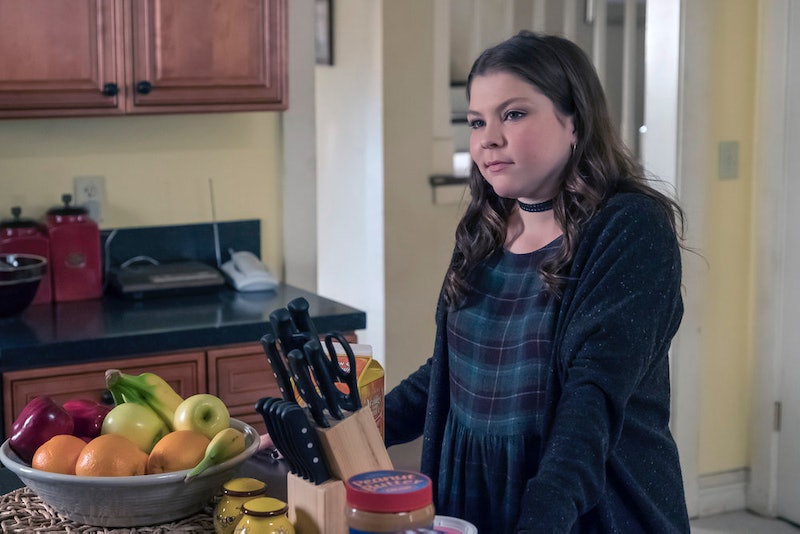 I just knew that Jack had to go out in a better way than what seemed to be teased on the Jan. 23 episode of This Is Us (major SPOILERS ahead). It was just too sad an ending for him to die in his sleep unaware of the fire. Obviously, no death would still be the best option, but since fans know Jack does pass away, I'd like it to be in a way that honors him. And, one theory suggests that Jack dies saving Kate from the fire on This Is Us, which would be a pretty "Jack" way to go.

The promo for the next episode (airing on the real Super Bowl Sunday of all days) hints that all our questions will be answered and it features a lot of footage of Jack being daring in the flames of his burning home. In one scene we see Jack opening a door only to be thrown back by a burst of fire. We also see Kate screaming from the doorway to her room as flames leap all around her. Finally, we see Jack shouting, "Take a deep breath, OK?" as he seemingly leads Kate out of her room and to safety.

We know Kate makes it out alive, but Jack doesn't, and the fire has something directly to do with his death. Now, many have theorized that Jack ran back into the house to save Kate's dog and died then. But, what if Kate is even more directly responsible for Jack's death than that?

Of course, you can't really blame Kate for her dad dying while trying to save her, if that is what really happened. Any dad would do the same. But, fans did see that Kate was wearing headphones in bed shortly before the fire. What if she was last to leave the house because she didn't hear everyone screaming for her to get out? What if, by the time she realized the house was on fire, it was so advanced that Jack couldn't survive his rescue mission for her? She may blame herself for the headphones hindering her escape and forcing her father to spend more time in the burning house to save her.

Again, not really her fault but it also makes sense as a source of self-blame. What Kate doesn't know, though, is that dying while saving Kate is a much better way for Jack to go as far as fans are concerned. Will it still wreck all of us and make us sob during the Feb. 4 episode? Of course. But, at least then Jack will have gone out being the best version of himself: A loving father and family protector.

There's still a chance that Jack dies not saving Kate, but saving her dog. After all, Kate does survive the blaze, so it would be strange for Jack to have died while she made it out if they left the house together. Maybe she didn't realize until she was outside that the dog was still indoors and Jack raced back inside to save him. In that case, he's still a hero and Kate still has reason to blame herself. (Also, no judgement, but I'd like to think that if I was ever in that situation, my dog would literally be my first thought. But this is a show, not real life.)

In any case, Jack, if he has to go, deserves to go out as a hero. And whether he dies saving Kate or saving Kate's dog, I'm sure he would do it all over again in a heartbeat — because that's just the kind of guy he is.