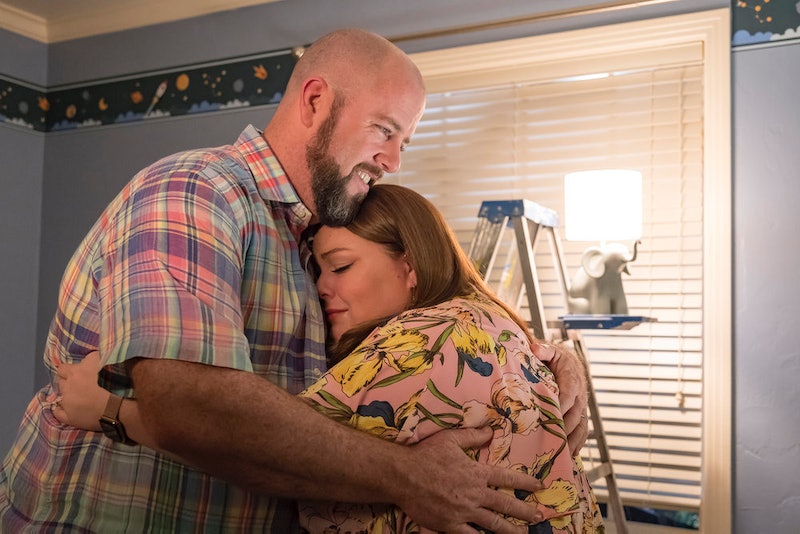 Kate and Toby aren't out of the woods yet with their baby, since little Jack was born very premature, but things are looking up for the family. During Tuesday's episode, Kate had an emergency C-section after her water broke and the baby's heath declined at 28 weeks. That's about two months early, so baby Jack has a long road ahead of him. But Kate's son will survive on This Is Us if the writers know what's good for them. She's suffered enough loss on this show, and Kate can't lose two Jacks in her lifetime.

Despite his potential health struggles, Kate actually seems cautiously optimistic about Jack's survival. It's Toby who's having a harder time with things. "He's really, really small," Toby said when describing his son to the Pearson family. He seemed in a daze as he explained the complications. "They put him on a machine because he can't breathe on his own yet, and he's in this plastic box to keep him warm."

Later, in the NICU with Kate, Toby couldn't stop talking about how little Jack was. "I can't believe how small he is. He doesn't look like a regular—" Kate cut him off and said, "Because he's not." To be fair to Toby, their baby is very small right now, but babies are born prematurely all the time. We may not see it on TV often — outside of an odd Grey's Anatomy storyline — but it's a reality for a lot of parents, and that's what This Is Us wants to explore.

"This was a high-risk pregnancy, given all the factors for Kate, and the fact that it would all go seamlessly and she would carry to term and have this perfect, easy delivery did not feel real to us, or any of the doctors that we spoke with," executive producer Isaac Aptaker told Entertainment Weekly. "So this felt like what would actually happen, which is always what we strive for."

Chrissy Metz, who plays Kate, had previously also spoken to Entertainment Weekly about how it presented an opportunity to tell a story not often seen on TV. "Toby and Kate are going to have a bit of an unconventional parenting situation. Not unconventional in that people aren’t doing it, but not what I think either of them ever had in mind," she said. "It’s going to be challenging for me as an actress, which I’m excited about — scared but excited."

As far as whether little Jack will survive beyond this, all signs point to yes. As I discussed last week for Bustle, preemies born at 28 weeks have an 80 to 90 percent rate of survival and only a 10 percent chance of long-term health issues, according to the University of Utah Health. And Kate asked her dad to watch over and protect his grandson, which feels extremely like something Jack — wherever he is now — would do for Kate.

"I need him to be OK, and I don't know why, but I know that you can do that," Kate said to her father. She then turned to Toby and said, her voice steady and full of reassurance, "He's gonna be OK. He is." It may not be the easiest parenting road, but Kate seems up for the challenge. Her baby survived the delivery, and now they just have to take things one day at a time.

And even though next week's episode is called "Don't Take My Sunshine Away," try not to read into the title too much. After all, Metz hinted to USA Today that "there is joy" in this storyline, as difficult as it may have begun. She added that show creator Dan Fogelman "specifically said, 'I think people will kill us [if the baby dies].'" Jack's birth may not have been picture perfect or exactly what Kate was planning, but he's here and hopefully he's not going anywhere.