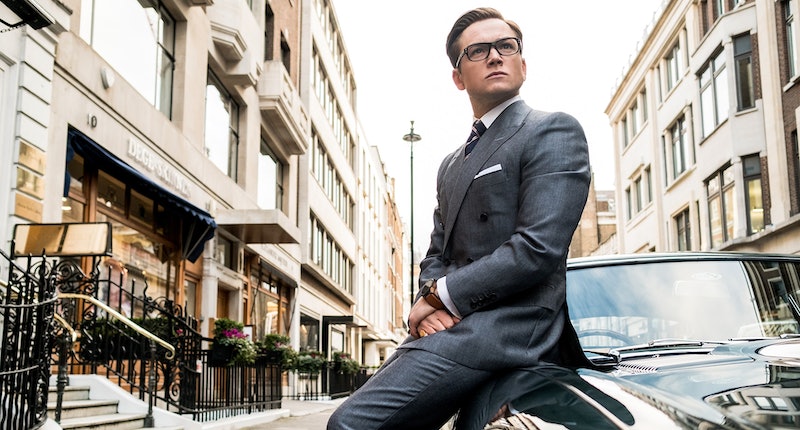 When Kingsman: The Secret Service came out in 2015, director Mark Vaughn held back on the possibility of a sequel, saying in a Red Carpet News interview he'd "wait and see" what audience reaction was to the lone spy movie amid superhero giants before deciding. But in the same breath, he said, "There's so many things we haven't had fun with in the spy genre yet." Kingsman: The Secret Service was a surprise hit, and with Kingsman: The Golden Circle set to hit theaters Sept. 22, the question's already arisen— will there be a third Kingsman movie? And if so, is there a Kingsman 2 post-credits scene that gives any hint what's coming up?

The first Kingsman didn't have a typical post-credit stinger, nothing that suggested a follow-up or teased a sequel. Instead, after a flashier end sequence, the film set up a mid-credit scene that had Eggsy's family story come full-circle. He had successfully saved the world and earned his pinstripes as an official Kingsman, and so he's returned to the pub seen at the start of the movie, where he invites his mom to live with him and get away from her thug boyfriend Dean. When Dean confronts Eggsy, he locks the doors and quotes his mentor Harry, saying "Manners maketh man". Mirroring Harry's earlier fight, Eggsy slams a glass into Dean with the crook of his umbrella, knocking him out cold. "Are we gonna stand here all day, or are we gonna fight?" Eggsy asks, and boom, back to the credits with the rest of the fight implied.

While The Golden Circle doubles down on its predecessor's celebrity cameos, big action setpieces, and outrageous sex scenes, post-credits is where it falls short of the original. There's absolutely nothing after the film, mid-, post- or otherwise, but credits and credits alone. Does that mean there's no future Kingsman films planned? On the contrary.

In an interview with Variety, Vaughn said he and co-writer Jane Goldman had ideas for a third Kingsman in mind while penning the second installment. And while The Golden Circle, like The Secret Service, is a complete and enjoyable story on its own, in an interview with Deadline Vaughn made no secret of his ambition to direct a trilogy, saying, "I pray to God, I have fingers crossed right now, I am clutching onto a piece of wood that the film is a hit. Because there are a lot of Easter eggs and ideas that we’ve already put into [The Golden Circle]." He also mentioned thinking of The Golden Circle as the franchise's The Empire Strikes Back, with the audience left with characters at the brink of an entirely new adventure. And considering the ending of The Golden Circle has Eggsy starting on his most intense mission yet, there are so many different directions the series could go.

Though they're based on a comic of the same name, the Kingsman films haven't hewed too closely to the original story. The first comic and film follow a relatively similar storyline with minor tweaks and changes, but the sequels differ wildly. The Golden Circle has Eggsy setting off to stop girly druglord Poppy from holding the world hostage, with the help of some American friends. Comic sequel The Red Diamond, on the other hand, skews even more British than the first, with Eggsy struggling to balance his posh new manners with his old life. Will the third film take a cue from the comic sequel? For now Vaughn and company are keeping fairly tight-lipped about details, but one thing's for sure — you don't have to stick around after The Golden Circle to get your fill of over-the-top action.