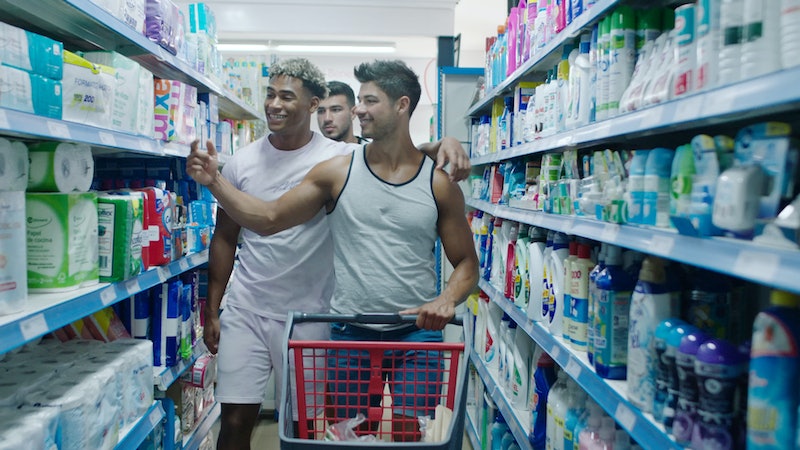 Although the Love Island contestants rarely get to leave the villa, and seemingly spend weeks just chatting to one another, there are rare occasions when they get to go out into the big wide world. The odd tasks, date, club night, or even food shopping can mean housemates interacting with the locals out in the real world. Or so we thought. But some eagle-eyed viewers are convinced that Love Island might be using extras and even doubling up on those extras during episodes. So, are the locals and bar staff legit, and does Love Island use extras?

Last week, three of the islanders were let loose in a small Spanish supermarket to purchase food for a date night with their partners. There, they attempted to brush up on their Spanish with the locals, including with a cashier.

This cashier was the catalyst for some heated drama that evening in the villa. Anton thought it would be a fabulous idea to jokingly slip his phone number to the cashier even though he was coupled up with Belle. Although Belle seemed OK with the joke, it did add fuel to her fire when she and Anton got into a blazing row later on.

Now audiences are certain this cashier was in fact the same woman serving drinks in the Club Island Bar. Whoever is controlling Amber's official Twitter page even pointed out that this mystery woman seemed to have the same glasses, the same brown hair colour, and even the same black wristband on her right arm.

One viewer wrote "Shopkeeper by day bar staff by night," while another said "Wait wait wait that bar woman is the shop keeper."

However, I reached out to a rep at ITV, who has confirmed that "the shop cashier and the bar tender are not the same person," and that "any social media follow up on this is speculation and not fact."

So that's the end of that, I guess.

Either way, it's actually a pretty normal practice for reality TV shows to hire out extras for some roles. After all, if your average person or a superfan of the show was on set, the whole thing could be filmed and leaked on social media within in seconds, there would be awkward eye contact with the camera, and people walking in and out of frame miming "love you mum."

For example, E4 socialite reality TV show Made In Chelsea appears to have extras, as The Tab reports they put a call out for them via online casting call and auditions company To Be Seen.

BBC's business show The Apprentice has also come under scrutiny for using extras when it was revealed that Lord Sugar's secretary was played by an actress, as Chronicle Live reports. And the show itself even poked fun at this theory on Celebrity Apprentice for Comic Relief 2019 when the secretary could be seen playing solitaire and scrolling on social media at her desk.

It's no secret that reality TV isn't that real. Producers orchestrate scenarios and have plot devices to keep fans at home entertained. But there may be more to it than you think. According to the Independent, former housemates have claimed there are lots of secrets in the villa. They reportedly receive in-house beauty treatments, their dinners are cooked and delivered to them, and apparently the clocks are all set to the incorrect time. Woah.