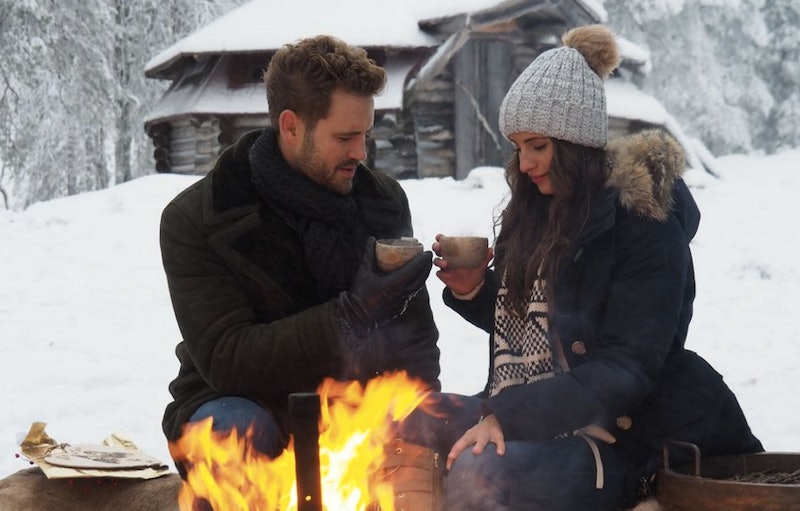 Mere hours stand between us and knowing who Nick Viall chooses to spend the rest of his life with on The Bachelor, and the suspense is killing me — just like it has been all season long. But what if, at the end of all this, he finds himself single... again? My heart couldn't take it, but it's a possibility that he could be left standing alone after that final rose ceremony. So does Nick get rejected by both women on The Bachelor finale? Let's examine the evidence.

First of all, the promo for Monday night's episode? Yeah, it's looking a bit ominous. There are no smiles, just tears, as Nick explains that he's been heartbroken in the past by Kaitlyn Bristowe and Andi Dorfman (like we didn't already know). Then, there are soundbites from both Raven and Vanessa voicing their doubts about their relationship with Nick before he looks sadly at the engagement ring in his hand. And the icing on the cake? He's still looking sad in a clip of him from The Women Tell All that's meant to represent whatever goes down on After The Final Rose.

If you took out the voiceovers and changed the music, it would look a lot like a trailer for a horror movie. Just saying.

Then, there's the next exhibit: The super shady interview Chris Harrison did on Good Morning America on Monday. While on the show, he said that Nick "might be the first bachelor in the history of this entire franchise to be left at the end," and then didn't elaborate on what that could mean. There's a good chance our faithful host is just trying to drum up drama... or he's trying to prepare us for the worst.

And as for what Nick himself has said? Interestingly enough, he has yet to come out and say he's engaged as some Bachelors have done in the past, but in an interview with Us Weekly in January, he did say that he "definitely found love" on the show — whatever that means. It's certainly promising to hear him say that, even if the lack of detail here is driving me nuts. I need to know!

The true answer to this question won't come until the finale airs Monday night, but if Nick ends up with Raven or Vanessa, he's a pretty lucky dude. They are both amazing!