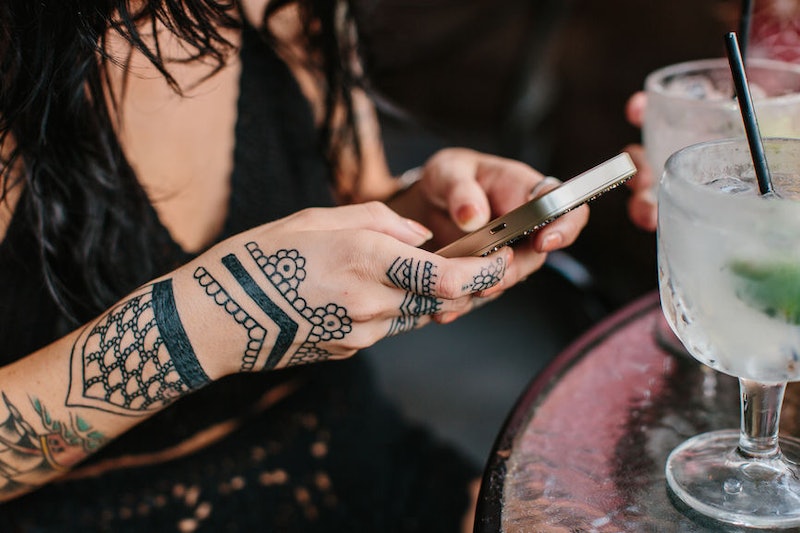 With the development of dating apps and new social technologies, what once seemed like a pretty forward act is now — thankfully — totally normal. And social media is a good way to get something going between you and your long-term crush. But does sliding into someone's DMs actually work? A new study has revealed that a lot more may be going in there than you first thought, with over half of Generation Z-ers saying they have used DMs to sext at least once. However, private messages and social media are not just the playgrounds of the younger generation. It turns out we're all getting in on the action, taking advantage of new technologies to improve our sex lives and get what we want. And I'm so here for it.

The 2019 SKYN condoms Sex & Intimacy survey found that a quarter of the people they spoke to had met sexual partners through social media. The survey, which looks into the sexual practices, beliefs, and desires of the public, found that social media plays a pretty fundamental role in the sex lives of many.

Digging a little deeper into sexting, SKYN also found that bisexuals were more likely to sext than their heterosexual counter parts, with 69 percent admitting they had sexted at least once compared to 47 percent of straight respondents.

It's sad, but I can’t imagine a world without social media, texting, and instant messaging. It's so ingrained in our day-to-day lives that it begs the question: could you give it up? I'm not so sure I could.

While Instagram may be seen as a thing for the young, it would seem social media is playing an increasingly bigger role in everyone's love and sex lives. With dating apps connecting you to any potential suitors in your area, and your social media crush being just a DM away, social media and apps seem like the method of choice right now. But which would you give up: sex or social media? Now that's something to think about, isn't it?

More like this
Hinge's New NFAQ Feature Is Demystifying Queer Dating
By Emma Carey
Are Virgo & Capricorn Compatible In A Relationship?
By Kristine Fellizar
Virgo & Sagittarius Zodiac Compatibility, According To Astrologers
By Kristine Fellizar
How This Founder Turned Her Antidote To Doomscrolling Into A Business
By Anna Scott
Get The Very Best Of Bustle/UK