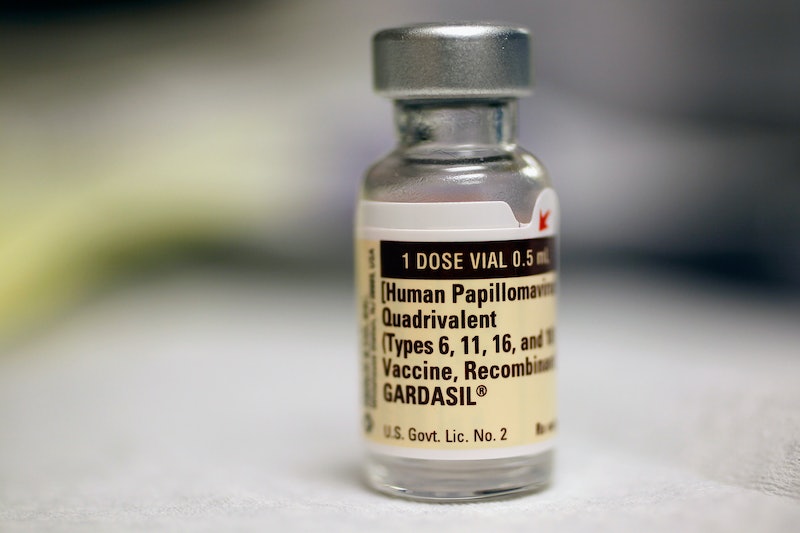 The traditional guidance around the vaccine for human papilloma virus (HPV), is that it should be given to people when they're in their early teens, preferably before they become sexually active. This is because HPV is the most common STI, and around 80% of people who are sexually active will have HPV, according to the Cleveland Clinic. And while most strains of HPV are harmless, some — nine of which the HPV vaccine guards against — are linked to certain cancers. So a lot of people think that if you're already sexually active, you're already at risk for or even exposed to HPV, and therefore, getting the vaccine doesn't really matter. But actually, as experts tell Bustle, getting the HPV vaccine is a really good idea even if you're already sexually active.

There's still a lot to be said for having the HPV jab early. "The HPV vaccine is most effective if administered before the onset of sexual activity," Gerardo Bustillo MD, OB/GYN at MemorialCare Orange Coast Medical Center, tells Bustle. However, getting it later doesn't mean you won't be protected — because of the nature of HPV itself, and the ways in which the vaccine functions. The U.S. Food & Drug Administration, the government body that regulates the administration of medications, published new guidelines in 2018 recommending that women up to the age of 45 get an HPV jab, even if they've already had children and have been sexually active for decades.

If you have had sex or have had a positive HPV test before, says Bohn, you should still get the HPV jab, to make sure you're protected as much as possible. There are up to 40 different varieties of HPV currently out there. The likelihood of your sexual partners having every possible variety of HPV and passing them all onto you before you get a chance to have an HPV vaccine dose is extremely low.

Unfortunately, the vaccine isn't retroactive and can't undo previous HPV diagnoses. "The vaccine will not protect against a particular genotype of high-risk HPV once it has been acquired through sex," explains Bustillo. If you have a type of HPV already, the vaccine won't change that. However, he notes, "it is unlikely that a sexually active person would have been exposed to all the genotypes covered by the vaccine, so immunization is beneficial in preventing these diseases."

Evidence has also found that if you've had HPV before, and have developed an illness such as cancer as a result, getting the vaccine could help prevent that from happening again. A study in 2012 found that in women who'd already had HPV-related cervical and vulvar diseases, the HPV vaccine helped reduce their likelihood of developing further HPV-linked illnesses.

It's definitely not too late to get the HPV vaccine if you're under 45, even if you've had a positive HPV test or have been sexually active for many years. It's a valuable possible preventative for other strains and could protect your health in the future. Talk to your doctor about how to get the vaccine, and take this important step for your health.

More like this
How Ovulation Affects Your Sense Of Smell, Libido, & More
By JR Thorpe and Lexi Inks
12 Active Date Ideas That'll Get You & Your Boo Outside
By Lexi Inks
12 Aphrodisiac Desserts To Spice Up Your Valentine’s Day
By Kaitlyn Wylde
An Expert Weighs In On The Viral Raw Carrot Salad Trend
By Alexis Morillo
Get Even More From Bustle — Sign Up For The Newsletter
From hair trends to relationship advice, our daily newsletter has everything you need to sound like a person who’s on TikTok, even if you aren’t.