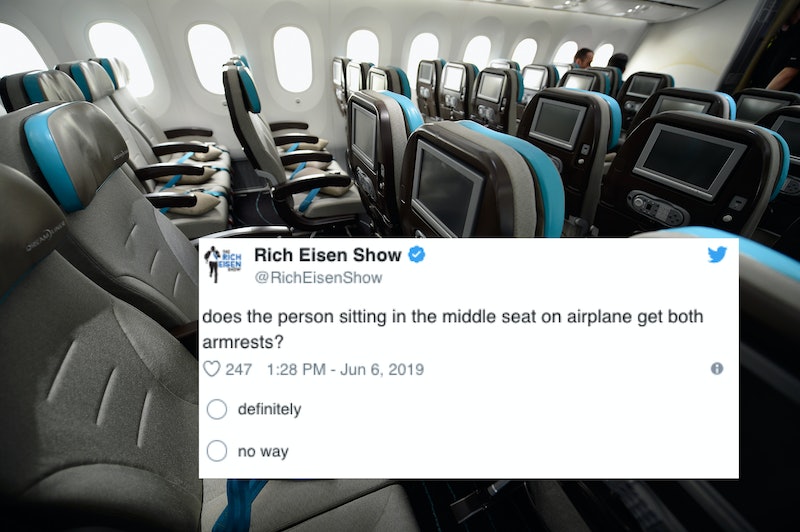 A debate is raging on Twitter — well, actually a lot of debates are raging on Twitter. That's basically what the whole thing is. But one of the many debates on Twitter today is this relatively lighthearted one: Does the person in the middle seat on a plane get both armrests that are next to them?

In case you don't have an immediate answer about which you are unflinchingly passionate, I'll explain what's going on here. In a row of three seats on a plane — a common configuration — there are four armrests: one next to the window, one between the window seat and the middle seat, one between the middle seat and the aisle seat, and one on the aisle. This means that someone is getting two armrests, unless the three passengers are all kind people, who move seamlessly through a beautiful dance of sharing the armrests when each person requires them. But, if this doesn't happen and the armrest lines are drawn from the start, what does that look like?

The Twitter account for The Rich Eisen Show, which is generally about sports, posted a poll on Thursday, June 6 asking, "does the person sitting in the middle seat on airplane get both armrests?" The responses are "definitely" and "no way". At the time of this article's publication, there have been around 100,000 votes, with "no way" at 53% and "definitely" at 47%.

It could be that people aren't thinking this all the way through before answering. Perhaps the immediate reaction is "of course no one should have both armrests!" when, really, it does make sense for the middle seat to get both.

This is something many people have pointed out in tweets of their own. While "no way" is leading in the poll, the people who are actually talking this out tend to be "definitely" voters.

Most people who believe the middle gets two armrests argue that having the middle seat sucks on its own, so the person sitting there should at least get this one, measly thing. "If you are in the middleseat of a airplane, it’s already not a good day. Let the middleseat person have both armrest," one user wrote. "They totally should they are the ones stuck between two people and that should be their added benefit!" said another.

In fact, after thinking about it, one person tweeted that they wanted to change their vote: "Can I change my mind? I think they should have both arm rests. I’d forgotten about the other ‘non-middle’ advantages."

A number of people also pointed to a bit from comedian Jim Jefferies in which he explained those "non-middle advantages". Basically, because the window person gets to lean against the wall and have an armrest, and the aisle person gets to have extra leg room and an armrest, the middle person should get to have the two remaining armrests. As he said, "We're not f*cking animals. We live in a society."

As for what the experts say, there's a lot of talk about shared armrests, which sounds awkward, but makes sense if you think about, say, your elbow resting timidly on the rear of the armrest while your seat mate's forearm is at the front. Smarter Travel writes, "If you’re sitting side by side, both of you have a claim to part of the elbow rest. Front portion or back portion, edges, whatever. Work it out." But, that might just be the protocol in a two-seat row rather than a three-seat row.

USA Today reports that a travel expert they spoke with says that the middle seat person should get both armrests. "If you feel the need to compromise, you can meet your neighbors halfway by offering the forward or rear portion of your armrests," the publication explains.

In a piece on the benefits of being the middle seat (like more networking opportunities, apparently) published on Market Watch, it says that the middle seat passenger should have both armrests and even calls it "widely acknowledged traveler etiquette."

That doesn't seem to be the case based on the poll results, but maybe now people who never thought much about which armrest belong to who will be more mindful and let the middle seater have some semblance of dignity.