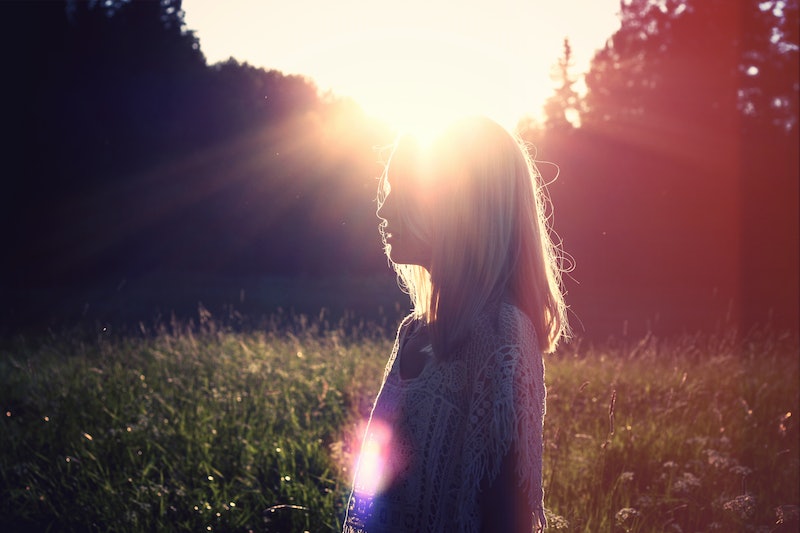 Even though I don't live in the path of totality, I couldn't be more stoked about the total solar eclipse that’s set to take place on Aug. 21. I mean, the U.S. hasn’t witnessed a coast-to-coast solar eclipse in nearly 100 years — so this thing is kind of a big deal for Americans. Hopefully you’re as stoked about all of this as I am; but even if you’re not, you should know that solar eclipses can affect your mood and mental health.

This isn’t just my opinion, either. NASA clearly states on its website that solar eclipses, “have always been capable of producing profound psychological effects.” Apparently, solar eclipses can somehow make humans feel less energetic and more restless at the same time. They can increase anxiety and stir up unpleasant emotions as well, so you should definitely take some extra time for self care this Monday if you can.

Of course, it should be noted that the psychological effects of a solar eclipse aren’t all bad. In fact, veteran eclipse-watchers and psychologists alike say that solar eclipses bring people together — so that’s pretty cool. Plus, if you’re prepared for emotional distress, it’s so much easier to manage.

On that note, here are just a few ways the solar eclipse might mess with your mood — and what you can do about it.

Even if you're not in a transitional phase right now, solar eclipses represent new beginnings, and new beginnings can make us humans feel restless. So if you find yourself rethinking everything from your career path to your romantic relationship(s) when Aug. 21 rolls around, don't freak out too hard. Taking the time to reevaluate what you want out of life isn't a bad thing, and there's absolutely no pressure to make any major decisions on Monday.

Keep in mind that almost nothing is going to feel "normal" during a solar eclipse, so it's OK to simply be restless without actually acting on your restlessness. If your feelings don't dissipate post-eclipse, then you might want to make some changes. Either way, don't feel like you need to turn your life inside out just because the solar system is doing weird stuff.

Feeling sluggish on a Monday might just sound like business as usual, but on Total Solar Eclipse Monday, you should probably prepare for some extra tiredness. For one thing, anxiety wears people out, and we've already established that you'll probably be feeling extra anxious come Aug. 21. More importantly, though, experiencing nighttime in the middle of the day (even for a little bit) is bound to eff with your circadian rhythm. As Forever Conscious puts it, "Our circadian rhythms are dependent on the rising and setting of the Sun, and when darkness falls during the middle of the day even just for a few hours, it can definitely have an influence on our body."

Fortunately, there are a few ways to combat feeling tired during the day. If you can, try go to bed a bit earlier than usual on Sunday night, stay hydrated, take a walk, and eat well. If all of that doesn't do the trick, just keep on keeping on until you can go home and pass out.

Since solar eclipses can be a time of heightened emotions for a lot of people, it's possible that you might find yourself dealing with some difficult feels this Monday. Forbes recently spoke with millenial writer and astrologer Tanaaz Chubb about the issue, and it actually makes a lot of sense. Chubb, who co-created the mindful lifestyle blog Forever Conscious, says she's convinced that planetary alignment can affect our bodies and minds as easily as it affects the tides. (Our bodies are 70 percent water, after all.) Further, Chubb actually recommends creating a deliberate space for yourself to feel any unexpected emotions that might bubble up — pleasant or otherwise — rather than trying to avoid the experience. As Chubb puts it:

"Often our instinct is to resist the painful emotion or say, ‘I shouldn’t be feeling this,’ but it actually prolongs the emotion. It’s much better to say ‘This is how I feel’ and own it. Cry if you need to. It’s amazing how quickly an emotion passes when you just own it.”

So, there you have it. If Monday rolls around and your heart starts aching for your ex, the loved ones you've lost, or the bank account you wish you had, just let it be. It's easier said than done, I know; but when it comes right down to it, feelings are only visitors. Greet them, then let 'em pass.

Solar eclipses have been eliciting anxiety in humans since forever. So whether you're an anxious person or not, it's possible that your anxiety levels will be higher than normal during the solar eclipse for a lot of reasons. If you're in the path of totality, the sun will literally disappear for a couple of minutes — so there's that. Wildlife will likely be acting weird AF all day, too, and you'll probably pick up on that. If you're driving during the eclipse, you could run into some pretty dicey traffic. If you're feeling more restless/tired/emotional than usual, all of that crap isn't going to help you stay calm, either. And if you (like me) do struggle with an anxiety disorder, then you're going to have to deal with the cosmos wrecking your daily routine in a major way — and sticking to a routine is kind of a big deal for us anxious folks.

Luckily, there's a wealth of information out there on how to manage anxiety of virtually any kind. Here's just a few of the ways I cope with anxiety, in case you need some help getting started.

You Might Feel More Connected To Those Around You

For all the increased anxiety, restlessness, lethargy, and emotional sneak-attacks that you might encounter on Aug. 21, there's also an emotional upside to this whole thing. At least, that's what psychologist Kate Russo believes — and she should know, because she's been studying the effects of solar eclipses on humans for a while now. Earlier this week, Russo told Today witnessing a solar eclipse is such a powerful, humbling experience that it tends to break down barriers between people. As Russo puts it:

"You feel insignificant, but part of something greater. That feeling of connection we have is something that’s really bonding and you realize we are all human beings standing in this particular moment, having the same experience, regardless of what color, background, or religion we come from."

Now that's something to look forward to.