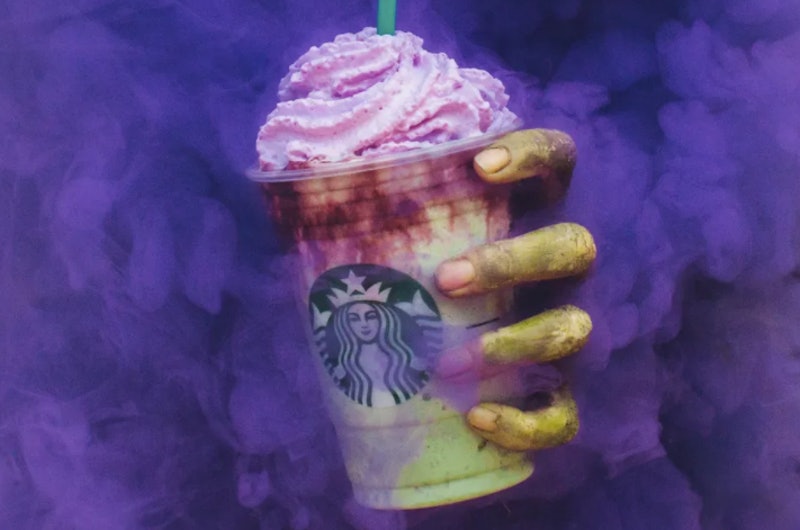 Sure, it's fun to try out new drinks that are colorful, or sweet, or sour, or holiday-themed, but when it comes to a morning drink, most of us really just want to know that it has some caffeine in it. Mistaking a non-caffeinated drink for a caffeinated one could be the difference between literally turning into a zombie yourself — or, in my case, a legit monster. So, I totally understand why you'd be hesitant to switch over your order at the 'bux for a drink in which the ingredients are more than mysterious. So, it's a worthy question to ask.

Well, I hate to break it to you, but you're going to need to order a coffee with your Zombie Frappuccino: Despite the fact that it has a mocha swirl, it doesn't have caffeine in it.

According to their website, the ice-blended Halloween drink is made of milk, créme frappuccino syrup, mocha drizzle (which is made of a sugary cocoa sauce and not espresso), pink powder (made with fruit and veggie coloring), and green apple caramel powder (also made with fruit and veggie coloring, as well as other natural flavors). So as you can see, there's a lot going on in the Zombie Frappuccino — just not coffee.

So, here's what I suggest: get your regular coffee tomorrow morning, whether it's a PSL, or an MPL, or just a plain old unabbreviated coffee, and enjoy that just as you would. Then, when the after-lunch blues set in and you're feeling exhausted and lifeless and like you can't possibly stay at your desk any longer, take a 'bux break and get a Zombie Frappuccino. It won't give you the caffeine boost, but it will wake you up like whoa: The combination of sweet and sour and sugar will literally create a Halloween party in your mouth. Seriously this drink has so much going on that it tastes like a different drink every time you move the straw. You'll go back to work flying high on a sugar rush that'll be enough to get you through the rest of the day, no problem.

(Plus, it will give you that Instagram content you're after — you don't want to be the only one in your feed that doesn't try to re-create that zombie hand wrapped around a Frappuccino pic, right?)

And honestly, you'll be glad that it's not a coffee drink, because I can't even imagine what espresso and sour green apple taste like together. The reason this drink works is because it's just sweet. The mocha drizzle rounds it out a bit by adding some bitter, richer flavors, but anything more and I think the drink would be, well, undrinkable. In this case, you're going to have to keep your sweets and your coffee separate.

So consider the Zombie Frappuccino as your mid-afternoon pick-me-up, or save it for dessert. Whatever you decide, make sure you don't waste too much time trying to make a choice, because the drink isn't going to be around forever: In fact, it's only going to be around while supplies last, which is hopefully until Halloween, but if your neighborhood is as excited about the drink special as you are, it might sell out even faster. And once it's gone, who knows if it will ever come back. Not to be dramatic, but this could be your only chance at getting that Zombie Frappuccino 'gram — I mean, drink.