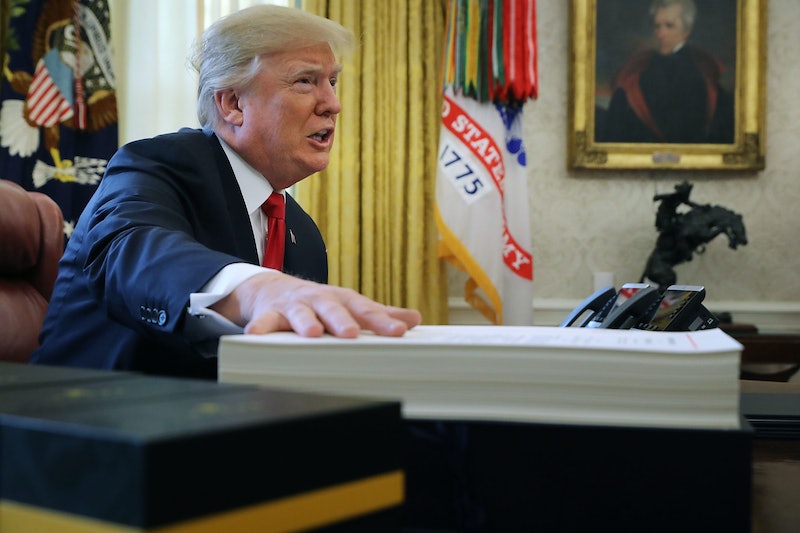 President Trump often uses Twitter to express his unfiltered thoughts and feelings on many subjects, nuclear war among them. His Tuesday tweet responding to rhetorical threats from North Korea is not the first reference to a potential nuclear throwdown, but it is the first presidential tweet mention of a supposed "red button." And while Trump doesn't have an actual, literal nuclear button, the launch of a nuclear missile lies almost entirely within the president's sole discretion.

Trump's reference to a metaphorical button came after North Korean leader Kim Jong Un made nuclear threats against the United States in a New Year speech. On Tuesday evening, Trump tweeted in part: "Will someone from his [Kim's] depleted and food starved regime please inform him that I too have a Nuclear Button, but it is a much bigger & more powerful one than his, and my Button works!"

North Korea's pursuit of nuclear weapons has been a thorn in the side of at least the past three presidential administrations. But tensions have escalated over the past year, as Kim has ordered several test missile launches. On Nov. 30, North Korea launched an ICBM (Intercontinental Ballistic Missile) that Gen. James Mattis said could target literally anywhere in the world.

If Trump did order a nuclear strike, there are a few barriers he'd face before an actual launch of any weapon.

Weapons terminology is reliably euphemistic, and nuclear weapons are no different. Rather than a button, a rotating group of military personnel carry a "football" with them wherever the U.S. president goes. "Football" here denotes the set of nuclear codes. Alongside the codes are explicitly laid-out war plans.

If Trump wanted to order a strike, he'd have to confirm his identity with the Pentagon's brass. To do so, he'd read off his "biscuit" — the secret codes he carries at all times that identify it is indeed him making the nuclear call. Once he'd been cleared as POTUS, he'd relate the relevant nuclear codes from the "football." The Pentagon and Strategic Command would receive the launch order, and be responsible for carrying it out.

In short, there's no hidden red button in the Oval Office that can send a nuclear missile immediately flying toward Pyongyang. Still, details of the process are scarce by intention.

Trump's Tuesday tweet elicited an immediate frenzy of reactions from politicians and pundits alike. There were many who criticized Trump's public broadcast of nuclear threats as unwise, among other less measured critiques.

Conor Friedersdorf argues at The Atlantic that Trump's nuclear button tweet "may be the most irresponsible tweet in history." In an article calling for a total ban of major world leaders from Twitter, Friedersdorf lays out the case against allowing those who hold nuclear codes access to the platform. He points out that the words of those in power "have triggered genocides and pogroms" before noting that miscalculated or dangerous rhetoric on the topic of nuclear war "could literally end human civilization."

Friedersdorf writes, "Having global leaders tweeting gives humanity nothing commensurate with the risks we bear so that the powerful can communicate this way."

The stakes of nuclear war are impossible to overstate. Any use of weapons would be devastating on a scale that cannot be fully fathomed. This may read like the breathless hyperbole of an alarmist. But it accurately describes the reality of the destructive capabilities housed within nuclear warheads.

Trump defenders don't necessarily agree with the outraged reaction to Trump's tweet. Piers Morgan tweeted that Trump "just reiterated what US presidents have said to North Korea for decades."

The good news for those worried about a secret presidential button putting the world on a nuclear collision course? There is no such red button.