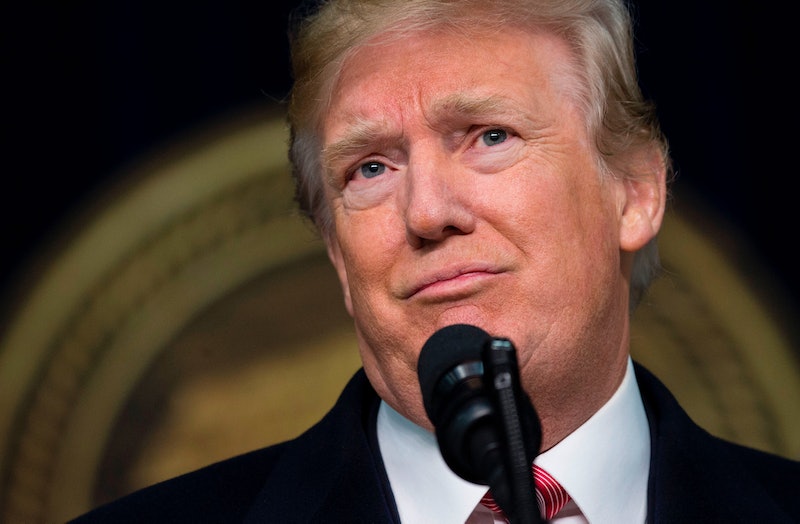 There's an old saying: If you want a friend in Washington, get a dog. And with his approval numbers hovering at record lows and a chock-full year ahead, experts are weighing in on whether President Trump could benefit from a loyal, albeit furry, First Pet.

"I think something like a pet is universal... It immediately humanizes the person in power," Sonya Gavankar, Manager of Public Relations for the Newseum, tells Bustle. "I think politicians have learned to use that to their advantage."

When a president owns a dog, it shows that "a person with a kind heart could still have the kind of steely nerve and backbone to make difficult decisions affecting the destiny of the country and even the world," says Bernard Unti, a Senior Policy Advisor for the Humane Society.

While household pets have been shown to reduce stress, a Presidential Pup would offer Trump the kind of publicity and reliability that could lead to a bump in his approval ratings. Sixty-eight percent of American households own a pet, and millennials lead the way, accounting for 35 percent of all pet owners. Meanwhile, millennials are some of the strongest opponents of Trump's agenda. Nearly two-thirds say they disapprove of Trump's job performance.

"It's not always easy to connect with somebody who is so powerful," says Andrew Hager, Historian-in-Residence for the Presidential Pet Museum. Hager says owning pets makes the president "feel more approachable, more human."

Why White House Pets Are So Darn Popular

A furry future Trump would join a storied tradition of Presidential pets. Trump is the first President in at least a century not to have a dog. Former Presidents Barack Obama, George W. Bush, and Bill Clinton all had dogs. The Obama's Portuguese Water Dogs Bo and Sunny stole visitors' hearts at the White House and made a splash on Instagram, Twitter and Facebook. (Obama had joked that selecting a breed was tougher than picking a Commerce Secretary.)

Barney and Miss Beazley of the Bush family proved so popular that the White House Communications Agency stepped in with a Barney Cam for online viewers, which spurred the creation of Barney.gov. The elder George Bush had a spaniel named Mille who co-authored her own book and knew "more about foreign affairs than" Bill Clinton and Al Gore (whom the president referred to as "these two bozos" in the original statement). Clinton's own Socks the cat nearly starred in his own video game, which may finally see the light of day thanks to a recent Kickstarter campaign.

Pets of presidents past are enshrined in memorials and monuments around the national mall, too. The Newseum in Washington, D.C. a permanent exhibit called “First Dogs: American Presidents and Their Pets” routinely draws crowds. At the Franklin D. Roosevelt memorial on D.C.'s National Mall, FDR's beloved Scottish Terrier Fala delights.

How Presidential Pets Get Seriously Pampered

Polling also shows a dog could be a better hit with the public than a cat: 74 percent of Americans say they like dogs a lot, whereas only 41 percent feel the same way about cats. But many animals have occupied the White House, including birds, horses, a raccoon, a cow, a pig and a badger. Former President Calvin Coolidge's raccoon Rebecca walked on a leash, and former President John Quincy Adams kept his alligator in the bathtub.

While the White House has had no small share of pets, those pets have had more than their fare share of special treatment: Warren G. Harding's dog, Laddie Boy, occupied his own chair during cabinet meetings, while F.D.R. was once accused of deploying a warship to retrieve his beloved Fala.

Not having a pet can be its own liability in a presidential campaign too. Gov. Scott Walker of Wisconsin's allergy to dog dander prompted its own New York Times article in the run-up to the 2016 election. Back in 2008, pet owners favored Republican presidential nominee John McCain, with his English springer spaniel, mutt, turtles, cat, parakeets and fish, to the petless Democratic nominee, Barack Obama, by 42 percent to 37 percent.

Mike Pence Steps Up As The Nation's Dr. Doolittle

In the President's absence, Vice President Mike Pence and his wife Karen are serving as chief pet-lovers in the administration. They brought their cats Pickle and Oreo along with rabbit Marlon Bundo to live with them in the Naval Observatory. In time, Hazel, a kitten, and Harley, an Australian shepherd puppy, came to live with them as well. Karen Pence also keeps more than 35,000 bees on the property.

"The Pences come from a very different world than the Trumps do."

"The Pences come from a very different world than the Trumps do," Hager says. "The Pences are much more of a homey, midwestern kind of people... I think it's just a clash of two different lifestyles."

Yet the Trump family doesn't appear to share the same love of animals. They did keep any at their home in Trump Tower, and the President is reportedly a germaphobe. In a profile of Mike Pence in The Atlantic, an adviser said Trump once insinuated that the Pence pets were "low class" and was "embarrassed" by the V.P.'s intention to bring the brood with him to Washington.

At least 16,900 Americans have no problem with the Pence pets. Marlon Bundo has that many Instagram followers and has his own children's book due out in March.

What Trump Really Thinks About "Dogs"

If the Trumps were to acquire a pet, there's the heady question of how exactly they would do it. First Pets are typically given as gifts (The Obamas were gifted Bo by Sen. Ted Kennedy, a friend of the president's and a Portuguese water dog owner himself). In one of the most famous presidential pet exchanges, First Lady Jackie Kennedy was given a puppy by Soviet leader Nikita Khrushchev during the Cold War. That dog, named Pushinka (the Russian translation is "Fluffy"), was a descendent one of the Soviet dogs that flew in space aboard Sputnik 2. When Pushnika had puppies, Caroline Kennedy named the litter — her father referred to them all as "pupnicks."

"President Trump reportedly told Pope he was too busy for a dog."

Amid an ongoing investigation about the Trump campaign's ties to Russia, history is unlikely to repeat itself. But a Trump supporter from Florida, Lois Pope, took up the cause when she found a docile, hypoallergenic Goldendoodle named Patton and offered him to the Trump family. Despite Baron Trump's fondness for the dog and Pope's instance that Patton is a very good boy, President Trump reportedly told Pope he was too busy for a dog.

If the President's Twitter feed is any indication, there's no love lost between Trump and the canine world. For the President, the word "dog" is a go-to dig at rivals and foes. While he's slung the insult at media professionals, former presidential candidates, the former leader of Egypt and the actress Kristen Stewart, Trump has also said that at least three Republican leaders — Sen. Bob Corker (R-Tenn.), and former Governors George Pataki of New York and John Sununu of New Hampshire — "couldn’t get elected dog catcher" in their respective home states.

At at least one point in his life, Trump owned a dog. The president's first wife Ivana doesn't mince words her memoir Raising Trump when it comes to their pet poodle, Chappy:

She later wrote that Chappy “had an equal dislike of Donald.”