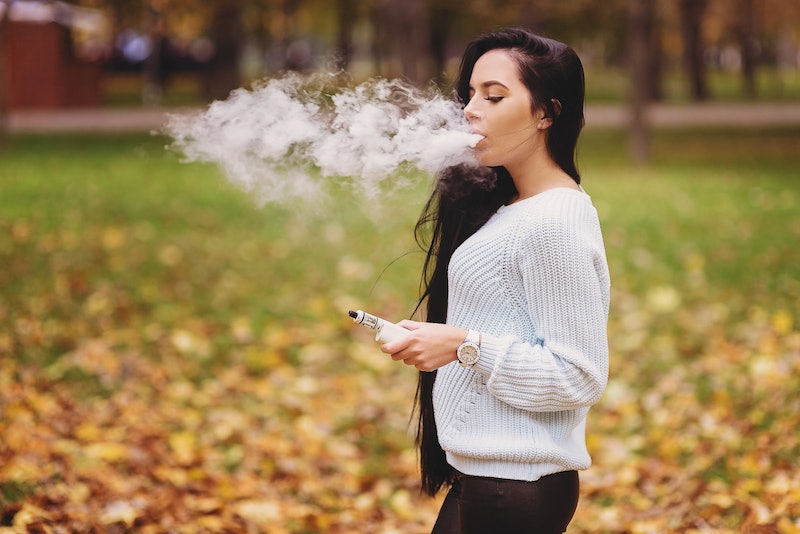 The health impacts of vaping have come under greater scrutiny recently — at least four people have died in the U.S. and 450 have fallen ill with acute lung disease that could be related to vaping, as CNN reports. According to a new study published in the Journal of Sleep Research, using e-cigarettes could affect your health in less serious ways, too: specifically, vaping could negatively affect your sleep.

Researchers from Oklahoma State University, the University of Missouri, and Ohio State University in the U.S. looked at the impact of both combustible cigarettes (i.e. your standard pack of Marlboros) and e-cigarettes on sleep health, or the "quality, timing, efficiency or duration" of sleep. 1,664 university students took part in the study — fitting, as previous studies found 60 percent of students say their sleep is "poor quality," while 10 percent meet the criteria to be diagnosed with insomnia disorder, the researchers said.

As the study authors noted, it's already widely accepted that smoking regular cigarettes can affect your sleep. Prior studies have found smokers experience an increase in sleep onset latency (the time it takes to progress from fully awake to fully asleep), a decrease in REM (rapid eye movement) sleep, and a decrease in the amount of time spent sleeping altogether. The researchers' question: does vaping have a similar effect?

The participants were asked to self-report their sleeping patterns using the Pittsburgh Sleep Quality index, a questionnaire that assesses aspects of sleep including sleep latency, time spent asleep, any sleeping medications used, and sleep disturbances. They also answered questions on their vaping and cigarette-smoking habits. The students' drinking habits were also recorded, since alcohol can also impact sleep.

40.9% percent of the participants said they'd tried vaping or currently vaped, while 8 percent said they used an e-cigarette at least once a month. As for their sleep habits? Even those who didn't vape daily experienced worse sleep health than those who never vaped, indicating that "even such occasional exposure to nicotine may contribute to the development of disruptions in sleep," the study authors wrote. Smokers of both combustible cigarettes and electronic cigarettes had "significantly more sleep difficulties" than non-smokers.

One difference between vapers and smokers? The participants who vaped used more sleep medication than those who smoked combustible cigarettes. That could be because e-cigarettes are easier to use, the researchers theorised, explaining, "regular users of e‐cigarettes may be able to use their devices more frequently due to ease and convenience of use and decreased likelihood of being impacted by campus smoking bans."

The study has limitations, its authors acknowledge: for one, all participants were college students, and most were white women. What's more, only 8 percent said they vaped regularly, which made for a pretty small sample size. Further studies should look into the sleep impact of other substances like weed or caffeine, the authors recommended, and incorporate the nicotine concentration in the "e-liquid" smoked. Mental health conditions such as depression and anxiety, both of which can affect sleep, should also be considered.

Still, it's an important start to understanding how vaping could impact your sleep — and your health more broadly — lead author Emma I. Brett of Oklahoma State said in a press release. "Given that poor sleep and substance use, including e-cigarette use, are both common among college students, understanding how e-cigarette use may impact sleep is crucial given its association with numerous health concerns," Brett said. "Since we found that even nondaily use of e-cigarettes was associated with worse sleep health, this may be a useful target for prevention and intervention efforts."