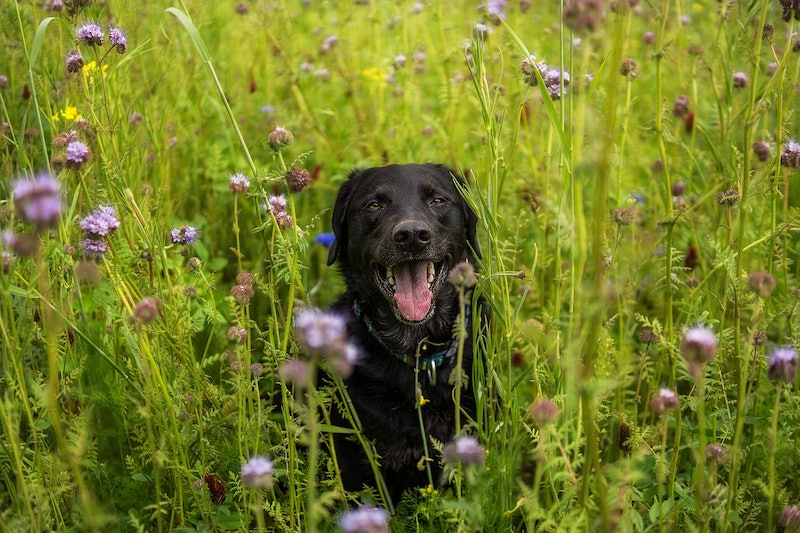 If you were ever having a bad day and noticed that your four-legged friend seemed to pick up on it, you weren't imagining things. New research has found reason to believe that dogs can "catch" your feelings, so to speak, suggesting that canines are even more attuned to our emotions than we originally thought.

In the study, which was published in the journal Animal Cognition, animal behavior researchers found that dogs are capable of emotional contagion — or being able to "catch" feelings of beings around them — and not just with other dogs. Using 53 dogs, they played the canines recordings of different sounds: Emotional sounds (happy and sad) from both humans and dogs, like playful barking and whining, and laughing and crying; and neutral sounds, like rain and crickets. They had three major findings.

A second finding was that the dogs displayed noticeable differences in their reactions to the happy sounds versus the sad sounds.

Thirdly, the dogs reacted to emotional sounds regardless of whether it came from another dog or a human.

There has been other research to support these findings. In another experiment, dogs were shown pairs of pictures: Either two people (one happy and one sad), or two dogs (one playful and one aggressive). Then they played audio: either playful or aggressive barks, or a person saying "come here" either cheerfully or angrily. The dogs had a tendency to look at the picture of the person that matched the tone of the audio, more often than not correct in the picture that they chose. When it came to matching the picture of the dogs with the audio, they were correct even more often. Other research has found that a dog could sense a human's emotions simply by looking at their face!

Yet another study from University of London researchers found that dogs were likelier to approach a person who was crying than a person who was humming or talking; and they typically behaved in a submissive manner in response. A lot of these findings point to one common conclusion: A dog's ability to sense emotion isn't a learned behavior — it's intrinsic.

Even if we weren't aware of just how good our dogs are at picking up emotions, we've trained them like we do.

If you've done even a little researching on training a dog, you've likely read that if you want an obedient, calm, well-behaved dog, then you need to behave in a specific way. This is because dogs understand our personalities and emotions, and they respond accordingly. Cesar Millan, the dog expert, has talked about reflection and how dogs mirror our emotions. In a blog post on his website, he says: "If you’re seeing definite connections between the dog’s behavior and the human’s energy, congratulations! You’re learning to think like a dog ... And this is how dogs are our mirrors. They react to our emotions and follow our intentions. When they act up and misbehave, they are telling us that our emotions and intentions — and therefore our energy — are out of balance."

Dogs: They're good for the soul. Next time your furry pal gives you some affection when you're feeling down in the dumps, remember: He knows you're having a ruff day. (See what I did there?)