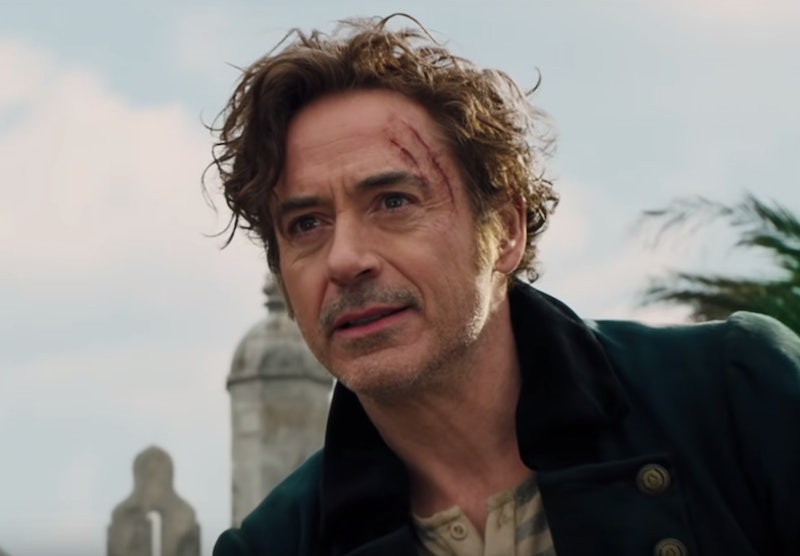 Robert Downey Jr.'s next project is about as far away from Iron Man and Marvel as one can get. The former Tony Stark will be playing an adventuring genius of a different kind in his upcoming film Dolittle, which premieres in theaters on January 17. He'll star as the titular Doctor Dolittle, an eccentric English physician who discovers he has the ability to speak to animals. It's a story that might seem familiar to people who grew up watching 1998's Dr. Dolittle starring Eddie Murphy, but the original Doctor Dolittle story dates much further back than that — and has been retold in a variety of fashions, including a 1967 movie and a stage musical.

In the latest adaptation, Downey Jr. plays the famous veterinarian-turned-recluse following the death of his wife. Despite trying to cut himself off from the rest of the world to lay low amongst his menagerie of wild animals, he's pulled back into society when he's asked to help Queen Victoria (Jessie Buckley), who's fallen ill with a mysterious sickness. Dolittle comes to her aid along with his assistant, Tommy Stubbins (Harry Collett), and, a variety of his animal companions. (All of which are voiced by a star-studded cast including Rami Malek, Selena Gomez, Kumail Nanjiani, Octavia Spencer, John Cena, and Emma Thompson.)

It's all a very high-stakes adventure, one that's a far cry from the original 1920 children's novel, The Story of Doctor Dolittle, Being the History of His Peculiar Life at Home and Astonishing Adventures in Foreign Part, written by Hugh Lofting. There, Dolittle also finds himself off on an adventure within the wilderness, but not at the behest of royalty. Instead, he sets off to cure an epidemic plaguing monkeys in Africa. It's the first in a series of novels from Lofting, which spanned 15 books.

But before you go seeking the original story, be warned that the book features some incredibly hurtful racial epithets. Later editions have been edited to remove them, but a lot of the themes remain, as this 1988 New York Times piece on Doctor Dolittle explores.

In 1967, the story was adapted into a film, Doctor Dolittle, starring Rex Harrison. The film was a musical, and featured many of the hallmarks associated with Doctor Dolittle today. Including, but not limited to, the song "Talk to the Animals," which Dolittle sings with his parrot companion, Polynesia.

The 1967 film went on to inspire a stage musical, which ran on London's West End from 1998 to 1989, and featured Julie Andrews. The musical then made its way stateside, but was cancelled after only nine weeks due to poor ticket sales. Later, there were a few more revivals in the U.K., including one that ran from 2007 to 2008 and another as recently as 2018 to 2019.

However, Dr. Dolittle didn't truly became a household name until the 1990s, when Hollywood rebooted the classic story, with Eddie Murphy in the titular role. In Murphy's version, the story did away with the musical elements brought about by the 1967 film, and leaned heavily on slapstick comedy.

Each iteration of the doctor and his adventures varies pretty greatly, and there's no doubt that Downey Jr. will make this character wholly his own creation. But it will be up to audiences to decide who's the best Dr. Dolittle of them all.

More like this
15 Intriguing Movies On Netflix That Are Based On True Events
By Mary Kate McGrath, Shannon Barbour and Grace Wehniainen
What Does The Presley Family Think Of 'Elvis'?
By Arya Roshanian
The 'Spiderhead' Movie Ending Is Nothing Like The Short Story It’s Based On
By Morgan Leigh Davies
How To Stream 'Jurassic World: Dominion'
By Morgan Leigh Davies
Get Even More From Bustle — Sign Up For The Newsletter