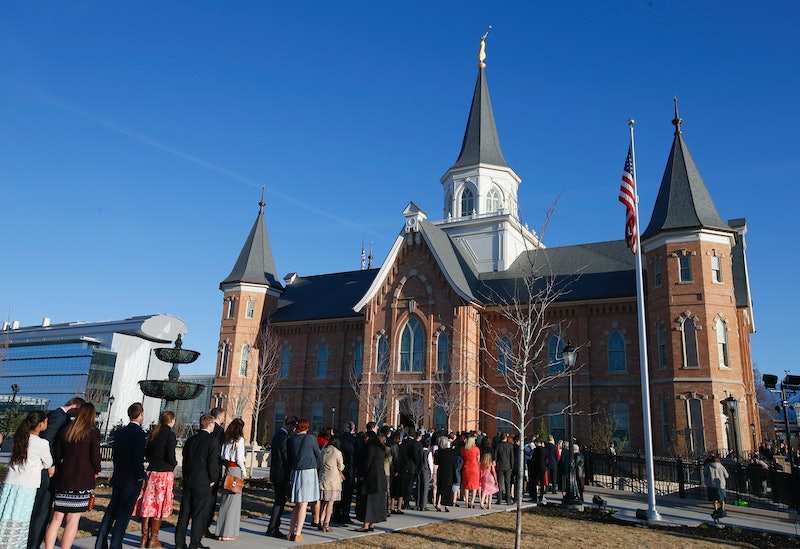 After several high profile scandals, the Mormon church changed its policies for addressing abuse allegations on Monday, most notably by stating that "[church] Members should never be encouraged to remain in a home or situation that is abusive or unsafe." The changes come after several members accused the Church of Jesus Christ of Latter-day Saints of encouraging them to stay with their abusers.

The church announced the changes in a letter Monday to senior Mormon leaders, requesting that they review the new guidelines with their subordinates and "teach this information as directed in the enclosure."

The new protocols state that "the first and immediate responsibility of Church leaders is to help those who have been abused and to protect vulnerable persons from future abuse," and that church officials "should never disregard a report of abuse or counsel a member not to report criminal activity to law enforcement personnel." In addition, members who are called in for interviews with church leadership are now entitled to have another adult present; previously, those interviews were primarily done one-on-one. The new guidelines also state that "priesthood leaders should help those who have committed abuse to repent and cease their abusive behavior."

Bustle has reached out to the church for comment on whether the changes were inspired by any specific event. The church didn't cite any specific incidents when it rolled out the new policies; however, several allegations regarding how it handles domestic violence and abuse have rocked the Mormon church in recent months.

In February, former White House aide Rob Porter resigned after reports surfaced that two of his ex-wives, both Mormons, had previously accused him of physical abuse. Those women, Colbie Holderness and Jennifer Willoughby, later told CNN that when they'd informed church leaders of the alleged abuse by Porter, they were discouraged from divorcing him. Porter has denied the allegations, calling them "simply false" in a statement at the time.

After Porter's resignation, BuzzFeed News reported that almost two dozen women had accused church leaders of telling them to stay with physically and sexually abusive partners. The church allegedly told several members that their eternal salvation would be at risk if they broke up with violent partners, that they themselves were to blame for their situations, and that going public with their allegations could hurt their partners' careers.

“I was told by my bishop, ‘You’re ruining your family for eternity,’” one woman recalled to BuzzFeed News. “So it was traumatic to realize that I had been living in this marriage for decades that was terrible and demeaning and degrading, and then I was being told that if I left it I was ruining my children.” A spokesperson for the church told BuzzFeed that "it is difficult to speak to specific circumstances without complete information from all involved, but the position of the Church is clear: There is zero tolerance for abuse of any kind."

Finally, just one week before the church outlined its new abuse guidelines, the website MormonLeaks published audio of Joseph Bishop, formerly the president of the church's Missionary Training Center, admitting that he molested several members while in his leadership position.

"You're not the only one," Bishop told a church member who asked if she was the only person he had molested. In another exchange, he flatly stated that "I'm a sexual predator."

The church later said in a statement that it had first been made aware of accusations against Bishop in 2010, but didn't take any disciplinary action against him because it was "unable to verify the allegations." Bishop himself hasn't publicly addressed the recordings, but his son and attorney Greg said in a statement that his father "forgets things sometimes" and "gets confused easily." Greg also accused the woman in the recording of "trying to leverage this Me Too movement to try to get some money from the church or put the church in a bad light or whatever."

"The Lord condemns abusive behavior in any form—including neglect and physical, sexual, or verbal abuse," the new abuse guidelines read. "Most abuse violates the civil laws of society."

The guidelines also state that the church has "a free and confidential abuse help line." However, the help line is only available to church leaders who who hear about abuse, not abuse victims themselves.