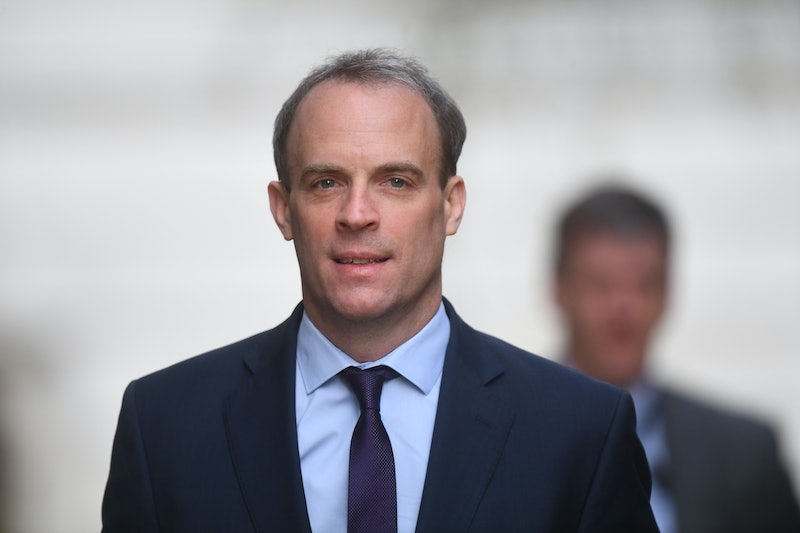 With Boris Johnson in intensive care with coronavirus, the country is currently in the hands of Dominic Raab, the Foreign Secretary and First Secretary Of State. Many of us are not as familiar with the MP as the Prime Minister, so I've outlined a breakdown of Dominic Raab's voting history, along with all the key facts you need to know about him.

Raab started his career in law, having studied at at Lady Margaret Hall, Oxford and for a Masters at Cambridge. He was first a business lawyer at City law firm Linklaters, and worked on project finance, international litigation and competition law. He then worked at the Foreign Commonwealth Office on a range of issues including investor protection and even war crimes policy.

Raab's voting record is mixed, particularly when it comes to issues that affect women. Notably, in 2011, he made some unpleasant comments about feminists, stating they are "amongst the most obnoxious bigots.” He followed this up in 2019 by answering "probably not" when asked if he considered himself a feminist on ITV News. In the same interview, he stated he was "a champion of equality and meritocracy."

Raab has largely defended abortion rights laws over the years, despite these concerning comments. He has previously said he believes the UK abortion law, which allows women to seek abortions up to 24 weeks into their pregnancy, was "broadly right".

He added: “I would want to see the number of unwanted pregnancies come down but I think education, public awareness and support for young people is the way to do it rather than change the legal limit. That’s my own view.”

He is a staunch Brexiteer, having voted 22 times against the UK membership in the EU. The MP has also consistently voted against spending public money to create guaranteed jobs for young people who have spent a long time unemployed.

Outside of his voting history, other bits of trivia you may be interested in knowing about the MP is that he is apparently a big Alicia Keys fan, and has a black belt in Karate.

Raab is currently deputising for PM Boris Johnson, and standing in “where appropriate”. He does not currently have full prime ministerial responsibility however.