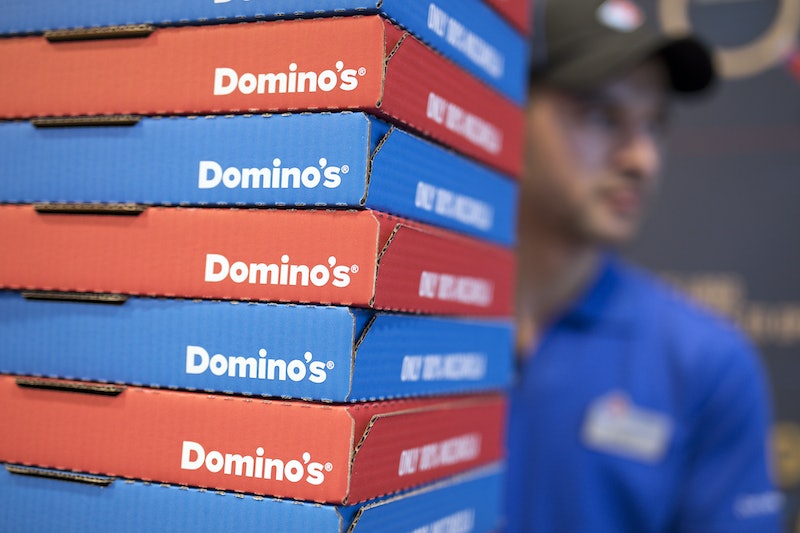 Long-suffering vegans, wave goodbye to a bland glorified tomato bread made into a bad excuse of a pizza, because one of the biggest pizza chains in the UK is finally bringing out it’s own meat-and-dairy-free pizza. That’s right, Domino’s are launching a vegan pizza. Rejoice! Following in the footsteps of Magnum ice cream, Galaxy milk chocolate, and even Hellmann’s mayo, the American restaurant chain have decided to veganise their pizza for their all their plant-based customers.

I think it’s safe to say, almost everyone loves pizza. In fact, on average Brits chow down on a whopping 731 cheesy pizzas in their lifetime, according to data collected by VoucherCodes.co.uk. But, on the other hand, veganism is on the rise, with vegans and vegetarians looking to make up a quarter of the British population in 2025. So why should vegans have to miss out on all the gooey goodness? Well, thanks to Domino’s, they don't.

The only downside? We don't yet have a release date for the new pizza.

Talking to Metro, a spokesperson for Domino’s said they are perfecting the recipe and the new pizza is on its way: "The rumours are true. We have been working hard to perfect a vegan recipe with the unmistakable taste of Domino’s fresh dough and cheesy goodness," they said. "We’re not quite there yet, but vegan pizza lovers shouldn’t have to wait much longer."

Vegan food is becoming big business. In fact, according to Vegan Society, the UK plant-based market was worth £443m in 2018 and the UK launched more vegan products than any nation — and it shows. Especially when it comes to pizza. In the frozen aisle, Goodfella’s have added a vegan falafel pizza to their range. And pizza chain Papa John’s have already smashed it out the park for their vegan customers, offering a wide range of pizza as well as Vegan Hot Dog Scrolls and cheery potato tots. I for one can't wait for Domino's to join the ranks.

More like this
Pret & Costa’s Coffee Is The Strongest On The High Street, According To Which?
By Sam Ramsden
Ben & Jerry’s New Sundae Flavours Are A Chocoholic’s Dream
By Sophie McEvoy
16 Valentine’s Day Quotes About Chocolate That Will Make You Hungry
By Emma Cueto
Dunkin’s Valentine’s Day Lineup Includes A Drink That Tastes Like Dessert
By Alexis Morillo
Get The Very Best Of Bustle/UK
Sign up for Bustle UK's twice-weekly newsletter, featuring the latest must-watch TV, moving personal stories, and expert advice on the hottest viral buys.