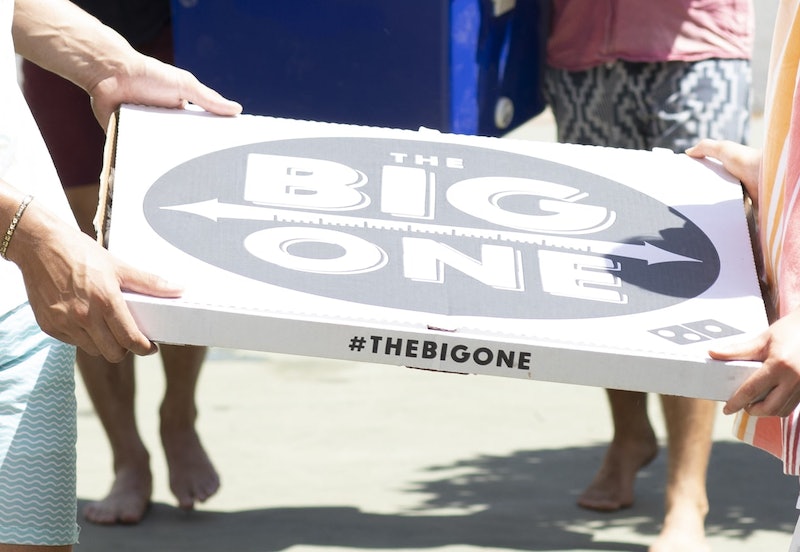 Ever had a dream that you were one of 20 people seated around the edge of an extra-extra large pizza? Well, you're not dreaming anymore. Domino's Biggest Pizza Ever is here and it will inspire you to dream bigger. In the heaven that is now our awoken reality, a pizza too large to fit on a delivery bike, that can barely fit into a car if it were not for trunks, exists. The only catch is that if you reside in the United States this real life fantasy pizza is very far away. The "Biggest Pizza Ever" is only available in Australia and New Zealand. I know, I'm sorry. But, at least it exists!

Whoever said you can't have it all did not have much of an imagination. Whereas you may be used to going halfsies on toppings when it comes to ordering pizzas for a crowd, Domino's "Biggest Pizza Ever" gives large parties everything in a single, very large pie. Because you can, in fact, have it all. At least when it comes to deciding what to order from the pizza parlor.

According to food site Foodbeast the pie, "is segmented into the chain's four most popular flavors: Pepperoni, Supreme, BBQ Meatlovers, and Hawaiian." Everybody and their particular tastes can be satisfied in a singular pie so big it's practically multiple large pies in 1.

Let's admire the stats of the pizza, known on social media as #thebigone. The pie can serve up to 20 people and each quarter is the size of 2 large pies. Foodbeast reports that the its diameter is just under 40 inches, in length. That's a lot of inches. Enough to fill up on a decent amount of each flavor.

This pizza isn't ~fit~ for regular pizza equipment. Custom pans, of course, are used to bake the pies to their glorious state. And when it comes to transporting the pizza so large it could double as a tablecloth cloaking a round coffee table, special boxes had to be made. Because you can't shove perfection into a regular cardboard box.

In order to ~order~ the pizza from Domino's at participating locations in Australia and New Zealand, you must be able to pick up in person. Because of that whole doesn't-fit-on-a-delivery-bike debacle. You might have to get creative getting it through your front door, but it's pizza, so you'll figure it out.

Each participating Domino's store will only be selling 2 pies per day. And you might have to predict when you'll be craving one as orders must be placed at least 24-hours in advance through an online reservation. You might want to also reserve the time of one of your besties. When you go to pick up your order you might need a little help carrying it to the car. It's that big.

Get your friends together and set up a Google Flights alert from your city — if you reside stateside — to Australia. This could make for the most epic holiday when pizza is your destination. In case you need convincing other than four pizza flavors in one, it's summer in Australia.