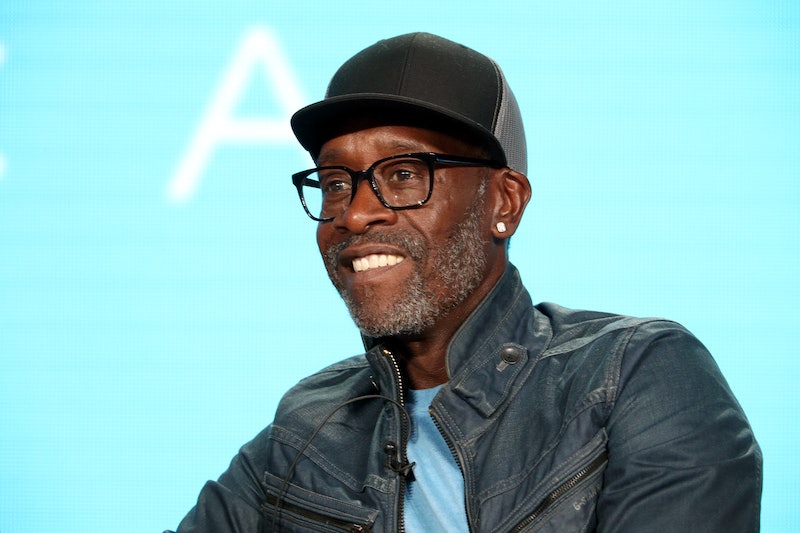 The hosts of Saturday Night Live aren't just in skits, they also emcee the show, giving them an opportunity to speak directly to the audience. Saturday night on SNL, host Don Cheadle wore a "Protect Trans Kids" t-shirt to do just that. Twitter absolutely loved the powerful and important statement.

Cheadle didn't say anything at the time to address what he was wearing, but he did stand so that the message was easy to read. He wore the shirt while on stage introducing musician Gary Clark Jr.'s second performance of the night.

"Trans kids have a (super)hero in their corner now. Thank you @DonCheadle for using your platform to make such an important statement," the National Center for Transgender Equality posted on Twitter thanking the actor, who plays Marvel's War Machine or James Rhodes. The group is the largest trans political advocacy group in the United States, and is based in Washington D.C.

PFLAG National's Twitter, also posted a message of gratitude. The group is an organization of LGBTQ people and their families and other allies. "Oh hai, @DonCheadle. We see you over there, speaking out on behalf of our #trans kids! Thanks for making a difference and for being a #TransAlly Love, @PFLAG," the group wrote in its post with a series of hearts.

Transgender advocates spoke out too. Charlotte Clymer, who works on the communications team at the Human Rights Campaign, tweeted her support for Cheadle. "Hey @DonCheadle, as a trans woman, I can't emphasize enough how much it means to see you do this on SNL. Thank you for standing strong with trans children," she wrote. "It means the world."

HRC's President Chad Griffin also tweeted a thanks. "Wow. Thank you @DonCheadle for using this opportunity to stand up for trans kids," he wrote. "True ally."

Some celebrities took to Twitter, too. Queereye's Karamo Brown wrote, "I have always been a fan of @DonCheadle but him wearing a protect trans youth T-shirt & Soviet Union hockey jersey w/ 'Trump' & '45' on the back on @nbcsnl have now put me in the super fan category. Subtle, Masterful yet Effective. #Bravo."

Olympic gymnast and ESPN commentator Kathy Johnson Clarke, also spoke out. "SNL serves up satire, of course, but it's often a platform from which to send a silent yet powerful message," she wrote. "It will forever baffle me why anyone needs to be asked/encouraged to protect trans kids, but thank you @DonCheadle! Love & support to the entire trans community!"

The transgender community, and trans kids in particular, have been targeted by Trump administration policies. The president has imposed a transgender ban on military service members, which the Supreme Court allowed to be implemented in January as a challenge moves through the courts.

Even more troubling for children, the Trump Departments of Justice and Education have also withdrawn guidelines for schools that would protect trans students from discrimination and government lawyers have stopped representing kids against their school districts.

Then in October, The New York Times reported that officials were preparing to interpret Title IX sex anti-discrimination rules as not applicable to trans students. Just under 84 percent of trans students are bullied or harassed at school, according to GLSEN surveys.

Cheadle's shirt helped highlight the need to change that.