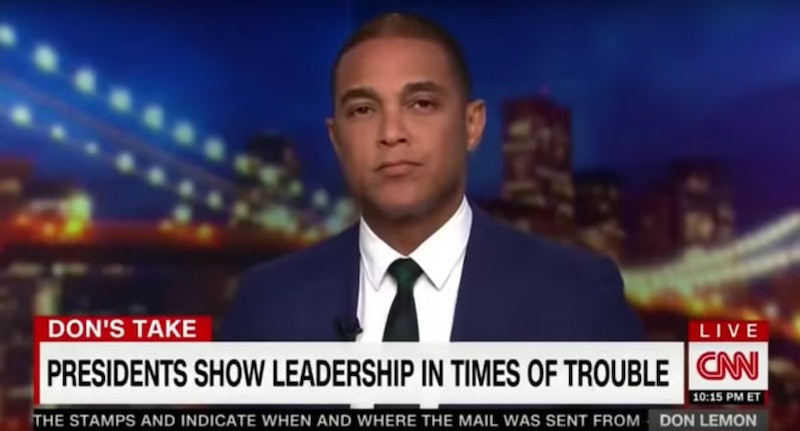 CNN via US Today News

CNN's Don Lemon is questioning Donald Trump's ability to lead in times of crisis. On Thursday, the CNN Tonight host compared Trump's response to recent reports of pipe bombs being mailed to members of the media and leading Democratic politicians to remarks previous presidents, such as Barack Obama, have made in similar times of trouble. In comparing Trump and Obama in times of crisis, Lemon argued that Trump fell noticeably short.

"In times of trouble or despair or violence, Americans look to their president for comfort and leadership, even when they don't like his policies," Lemon said. "They seek out a president's guidance, reassurance and understanding. So, where is President Trump's leadership at this very dangerous moment in our nation's history?"

Lemon questioned why the president wasn't "speaking out more forcefully" against the potentially violent attacks committed against a number of "prominent Americans."

While Lemon criticized Trump's initial attempt to blame the media for the pipe bombs, the CNN host did acknowledge that the president eventually called for Americans to "come together" and vowed to "keep America safe." However, Lemon took issue with both reports that Trump has no plans to echo the FBI's characterization of the pipe bombs as domestic terrorism and his continued refusal to admit that his divisive rhetoric may have contributed to the toxic political climate we're seeing today.

"It is time for President Trump to follow in the esteemed tradition of his predecessors, not just read words from the teleprompter, but to lead by example," Lemon said Thursday. "He should look Americans in the eye and say that he is going to stop using ugly language and lead the nation on a path of healing before somebody gets hurt or killed."

Trump appeared to respond to Lemon's criticism late Thursday, tweeting, "Funny how lowly rated CNN, and others, can criticize me at will, even blaming me for the current spate of Bombs and ridiculously comparing this to September 11th and the Oklahoma City bombing, yet when I criticize them they go wild and scream, 'it's just not Presidential!'"

Two more packages, similar in appearance to those containing pipe bombs, were found Friday addressed to Sen. Cory Booker and former Director of National Intelligence James R. Clapper Jr. According to the FBI, the package addressed to Booker was discovered in Florida. The package bearing Clapper's name was found at a Midtown Manhattan United States Postal Service facility and addressed care of CNN's New York offices. Clapper is a contributor to the cable news network.