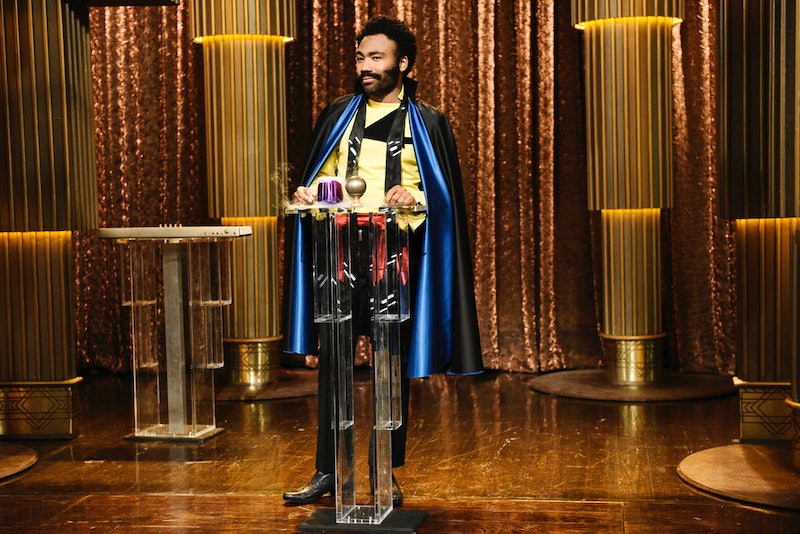 Can't wait for Solo to hit theaters? Donald Glover brought his take on Lando Calrissian to the small screen this weekend and threw some comedic shade on the franchise at the same time. The "Lando's summit" sketch on Saturday Night Live highlighted the lack of representation in Star Wars for black actors

The sketch was simple — and it's the simplicity that speaks to the problem. Representation in Hollywood should not only be better, it shouldn't be this easy to call out. In it, Lando is at a hotel on Naboo holding the first ever "galactic summit for all black humans" in the Star Wars galaxy.

"It all started with one question: where the hell are all the black people in space?" he says. Here's the problem: there aren't any, and it was important that Lando specified black humans. Including alien characters and creatures may increase the number of black actors in attendance, but doesn't necessarily help the cause of representation in science fiction — especially when it comes to the racial stereotypes that may or may not be enforced by characters like Jar Jar Binks, for example. Watch the sketch below:

Suffice to say, the summit is a disaster until everyone's favorite blue space elephant Max Rebo accompanies Lando in a '70s funky tune about making love in space, called "Making Love In Space." Welcoming remarks? Just Forest Whitaker's wheezy character Saw Gerrera from Rogue One. Fallen heroes? Just Mace Windu from the prequel trilogy. All of the week's other events have to be canceled due to lack of participation/representation. The group photo is probably going to be a selfie now.

Sure, as fact-check fans will tell you, there's also Captain Panaka from Phantom Menace, played by Hugh Quarshie and Thandie Newton's Solo character Val. Instead, Leslie Jones and Chris Redd play made-up black human characters. Additionally, they haven't yet made it to a slightly less long time ago in a galaxy far, far away where Finn (played by black actor John Boyega) is leading a new trilogy — but is all that enough?

Even fewer women of color are prominent. There's only Rose Tico, her sister Paige Tico, Val (the only black woman in this list), and a few Queens of Naboo who have maybe one line each, tops. Pretty much every Star Wars heroine — including Natalie Portman's Padme, Emilia Clarke's Qi'ra, Daisy Ridley's Rey, Felicity Jones's Jyn Erso, and Carrie Fisher's Leia Organa — is a Caucasian brunette. While it is wonderful to have complex female characters picking up the reigns from the male heroes who came before them, there is still a long way to go.

Fans shouldn't have to rely on remembering who the heck Captain Panaka is to see themselves depicted on screen. For too long, either consciously or not, whiteness has become the defalt for the human species. Not only is that inaccurate and not representative of the world we live in — it's especially silly when it comes to a story set in space! Use that freedom to disrupt the status quo as much as possible.

Hopefully the next "summit" will have more attendance. Could this be a recurring sketch? It might be interesting to do with other franchises, as well. As for Star Wars, the new films are doing a decent job rewriting past lacks of representation. The cast of Rogue One may have had a white lead, but most of the cast was comprised of people of color. There is a modicum of progress, and sketches like this remind fans that we're not over yet.

More like this
Stephen Graham’s Wife Plays A Vital Role In His Career
By Emma Madden and Sophie McEvoy
Does 'Locke & Key’s Ending Mean There Could Be A Season 4?
By Sophia Moore
Why Did Meatball Leave 'The Bachelorette'? His Second Chance Didn’t Last Too Long
By Grace Wehniainen
Memes & Tweets About Logan Switching From Rachel To Gabby On 'The Bachelorette'
By Grace Wehniainen
Get Even More From Bustle — Sign Up For The Newsletter