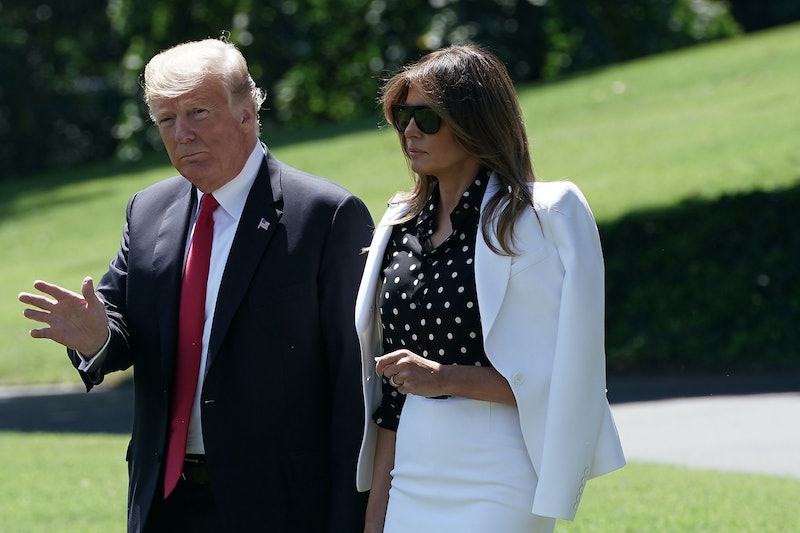 Not every U.S. citizen who's eligible to vote can get to their polling location on Nov. 6, so many will vote absentee this year. Among them are the first couple: On Friday, a spokesperson announced that President Donald Trump and Melania Trump cast 2018 midterms ballots already. In fact, they did so "a few weeks ago."

The couple voted in New York, where President Trump lived for almost his whole life before moving to Washington D.C. The highest-profile races in the state this season are for the Senate and governorship. Since he's registered at his Fifth Avenue Trump Tower address, according to The Washington Post, it seems likely that he'll vote for Chele Chiavacci Farley (running against Sen. Kirsten E. Gillibrand) and Marc Molinaro (running against Gov. Andrew Cuomo).

Unfortunately for the president, his vote probably won't make a difference. New York runs reliably Democratic: Although just a slightly higher percentage of residents said they identified as liberal than those who said conservative in a 2015 Pew study (a plurality said "moderate"), the state has consistently voted for Democratic presidential candidates since 1988 and has had two Democratic senators since 1999.

That's undoubtedly why President Trump hasn't wasted any time campaigning for Republican candidates in New York this season. He has, however, gone to many states with battleground races, like Indiana and Missouri. Per The Hill, he plans to hit many of the same places again before Tuesday: He's traveling to Missouri, West Virginia, Montana, Indiana, Georgia, Florida, Ohio, and Tennessee in the four days before the election.

According to USA Today, Trump is doing more midterm campaign rallies than predecessors President Barack Obama and President George W. Bush. He's scheduled to attend over 30 fundraisers and rallies by Tuesday. Some commentators believe that this push will excite his fans enough to show up for the GOP on Election Day. "There are quite a few base Trump voters who are not particularly excited about congressional Republicans," polling expert Patrick Murray told USA Today.

Trump has generally declared that he's confident about the election, though in private he's reportedly talked to aides about a potential Republican defeat and indicated that he's prepared to sidestep responsibility to instead blame congressional leaders, per Politico. He's also occasionally expressed some more doubtful sentiments in public. At a rally in Missouri on Thursday, he bemoaned the fact that recent tragic events across the country had stopped the GOP's "momentum."

"Now, we did have two maniacs stop a momentum that was incredible, because for seven days nobody talked about the elections," he said, referring to the pipe bomb scares and the shooting at a Pittsburgh synagogue that killed 11. "It stopped a tremendous momentum."

According to an analysis from the U.S. Election Assistance Commission, more and more people have been voting absentee in recent years. Between 2004 and 2016, the number of absentee ballots cast almost doubled from 14.7 million to 24.8 million. In 2016, 17.7 percent of all votes cast were absentee.

There may still be time for you to vote absentee in this election, too; check out the deadlines for your state here. Either way, be sure you cast a ballot this season. The 2018 midterms couldn't be more important.