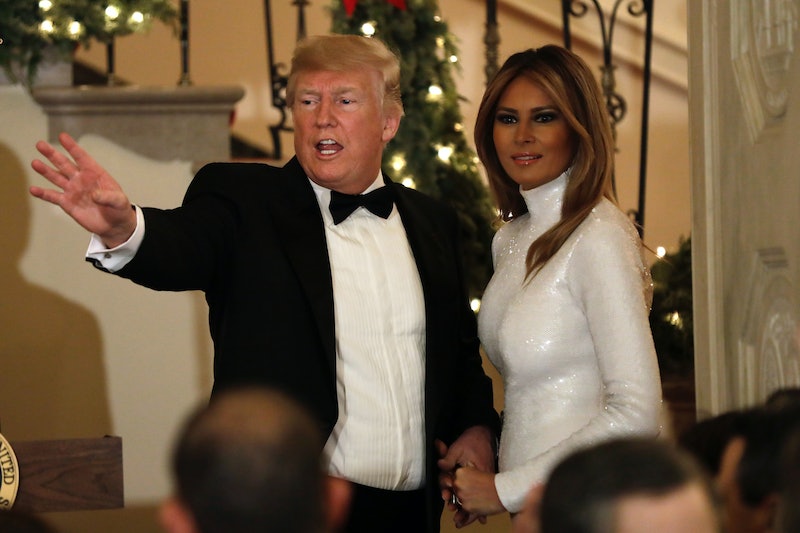 On Tuesday, the White House released Donald and Melania Trump's 2018 Christmas portrait. The official photo shows the president and first lady holding hands and smiling in a White House hallway full of Christmas trees, and is much more colorful and festive than the first family's desaturated 2017 Christmas photo.

"Merry Christmas from President Donald J. Trump and First Lady Melania Trump," the Twitter account run by the first lady's office tweeted. "@POTUS & @FLOTUS are seen Saturday, December 15, in their official 2018 Christmas portrait, in the Cross Hall of the White House in Washington, D.C." She also posted the photo to her Instagram account.

The picture does not show the infamous blood-red Christmas trees that Melania unveiled in November, which were derided as "jarring," "emotionally off," and "nightmarish" by various observers. Those trees are still on display elsewhere in the White House, though, and according to a recent report in the Daily Mail, some tourists to the first couple's residency have been ripping off bits of them to pocket as souvenirs.

Also on Tuesday, Karen Pence released the official 2018 Christmas portrait of her and Vice President Mike Pence, which shows the two smiling beside a Christmas tree.

"We wish you a very Merry Christmas!," Karen tweeted. "The @VP and I took our official 2018 Christmas portrait on Saturday, December 8, at the Vice President's Residence at the Naval Observatory in Washington, D.C."

As with their 2017 portrait, the Trumps are seen holding hands and standing side by side in this year's picture. As some noted, that's a marked contrast to the official Christmas portraits of Michelle and Barack Obama, in which Barack has his arm around Michelle's waist.

All in all, the decorations in this year's Christmas photo are more traditional, and less controversial, than some other holiday decor that's been seen in the Trump White House. In addition to the aforementioned red trees that are still on display, many raised an eyebrow at the skeletal, leafless white trees that adorned the White House in 2017. Dubbed "Melania Trump’s Nightmare Before Christmas" by the Daily Beast, those trees were "more frightening than festive," the Daily Mail wrote at the time, and drew comparisons to The Shining and IT.

Earlier in the month, Fox News reported that Donald had canceled White House's Christmas party for the press. A decades-old tradition, the annual press Christmas party was a very popular event in Washington, in part because it gave reporters the opportunity to pose for photos with the president and first lady. The Trumps held the party in 2017 but didn't pose for photos; this year, according to Fox News, they're not having the party at all.

Despite this, the president did wish Americans a Merry Christmas on Twitter about a week after Thanksgiving.

"May this Christmas Season bring peace to your hearts, warmth to your homes, cheer to your spirits and JOY TO THE WORLD!" the president wrote during the National Christmas Tree Lighting outside the White House.