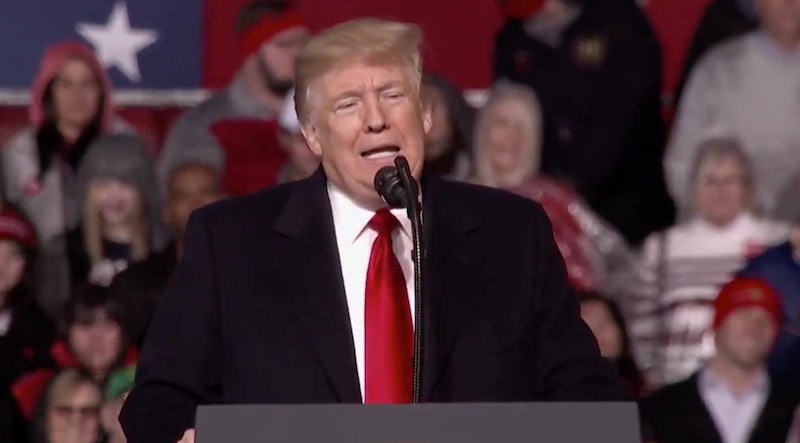 Another day, another campaign rally from Trump, despite the fact that he became president in January 2016. At a rally in Lebanon, Ohio, President Donald Trump praised Confederate Gen. Robert E. Lee and told black people to "honor us" by voting for Republicans.

Lee was a leader of the Confederate Army during the Civil War and, though he never openly supported slavery, historians say it's important to note that he never opposed it either. In a letter to his wife in 1856, he wrote that slavery was a greater evil to white men than it was to "the black race," The New York Times reported. He said the “painful discipline" slaves underwent "is necessary for their instruction.”

After praising Lee, Trump praised Union Gen. Ulysses S. Grant, who was born in Ohio. Grant was commander of the Union Army when Lee surrendered.

Trump's praise of Lee was not received well on Twitter. The Southern Poverty Law Center tweeted, "Robert E. Lee was not a great general, President Trump. He waged a war to hold onto the legal institution of white supremacy." In a later thread, the Center tweeted that Trump is perpetuating a revisionist history of the Civil War. "And now that Lost Cause 'history' is being perpetuated by President of the United States. Robert E. Lee was not an incredible general. And monuments to his name are not 'beautiful,'" the Center wrote.

While a University of Alabama Law professor called Lee a member of "a faction that was willing to rip this nation apart."

Author and television host Padma Lakshmi tweeted a list of things the president doesn't cared about, including "the working class, women, refugees, Puerto Ricans, LGBTQ, the middle class, [and] POC" comparing to a list of "Things Trump does care about: the 1% Saudi Arabians Putin Robert E. Lee, apparently."

In response to a video of Trump's comments, an author and veteran tweeted that the "#Fake News" should "be very careful here," adding that Lee was a part of, "Many American patriots [who] fought for both sides."

In comparison, a doctor called Lee "a traitor and a loser."

Chelsea Clinton also waded into the fray. "If you're asking about the President today, Robert E. Lee was a traitor," Clinton tweeted.

Before praising Lee and Grant, Trump said black Americans should vote Republican, asking them to "honor us" with GOP votes. "Get away from the Democrats. Think of it: We have the best numbers in history," Trump said, according to The Washington Post. "I think we’re going to get the African American vote, and it's true." Trump also praised Kanye West, briefly reminiscing on the Grammy Award winner's visit to the Oval Office on Thursday. "What he did was pretty amazing," Trump said of Kanye.