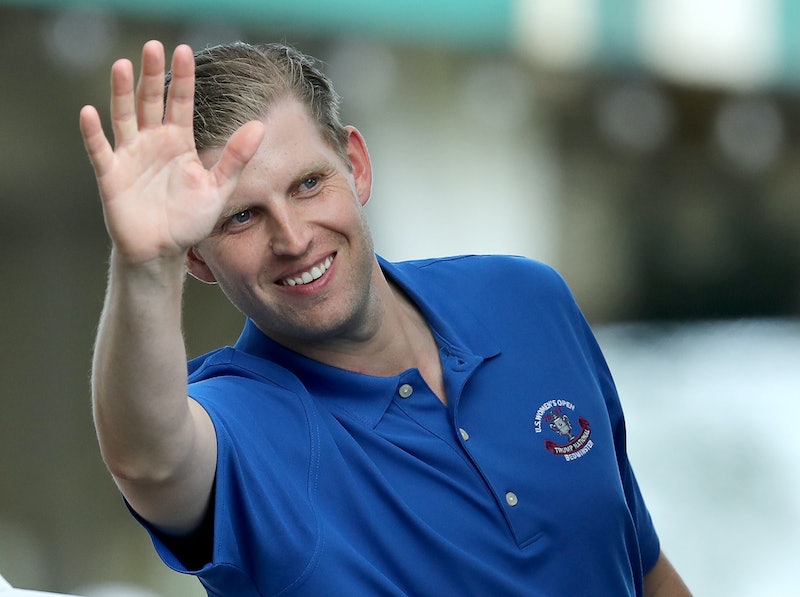 The president's second-oldest son went on air to defend his father's character Wednesday morning, but Eric Trump's explanation for why his dad isn't racist was bizarre. "My father sees one color, green," Trump told the hosts of Fox & Friends. "That's all he cares about. He cares about the economy." President Trump recently came under fire for a report that said he called Haiti, El Salvador, and some African nations "sh*thole countries" during a White House meeting last week.

The claim that the commander-in-chief only sees the color green was a new one, however. Eric asserted that the president doesn't care about anything except money, much less the color of people's skin, and further argued that Democrats were calling President Trump racist in order to distract from their political agenda.

"What is the message on the Democratic side right now?" Eric asked. "Who are the frontrunners? What do they stand for? They don't stand for anything."

White House press secretary Sarah Huckabee Sanders also called out Democrats this week for asserting President Trump is racist. Rather than suggest the president is colorblind, though, she claimed his TV resume vouched for his character.

"Frankly, I think if the critics of the president were who he said he was, why did NBC give him a show for a decade on TV?" she asked reporters on Tuesday. "Why did Chuck Schumer and all of his colleagues come and beg Donald Trump for money?"

Alternatively, President Trump has personally brought up the fact that the unemployment rate for African-Americans is at an all-time low multiple times in the past few days, implying that his actions spurred the decrease. In a Tuesday tweet, the president said:

Eric pushed this assertion a step further on Wednesday, presenting it as further proof that his father isn't a bigot.

"They will never report that African-American unemployment is the lowest it ever been," Eric said on Fox & Friends. "And they'll go out and will call him racist. It's very sad, it's a race to the bottom. They stoop very, very low."

It's true that the unemployment rate for black Americans is down, dipping to 6.8 percent in December after spiking at 16.8 percent in March 2010. However, the change can't entirely be attributed to the Trump administration's actions. As NPR's Danielle Kurtzleben put it:

[A] big problem with that claim is that those rates had been falling for long before Trump took office, and their declines don't appear to have picked up speed. This implies that there's nothing specific that Trump did to change this rate.

Indeed, both of these rates have been falling relatively steadily since around 2010, early in President Obama's tenure in the White House.

Even ignoring flaws in the unemployment debate, Eric's argument that his father doesn't see race is problematic at its core. Zach Stafford explained in The Guardian that "by professing not to see race, you're just ignoring racism, not solving it."

This ideology is very popular – like a racial utopic version of the Golden Rule – but it's actually quite racist. "Colorblindness" doesn't acknowledge the very real ways in which racism has existed and continues to exist, both in individuals and systemically.

In this sense, claiming someone only sees the color green implies that they aren't concerned about race issues in America. Economic injustices do play into systemic racism, but a lower unemployment rate alone doesn't eliminate all inequality.