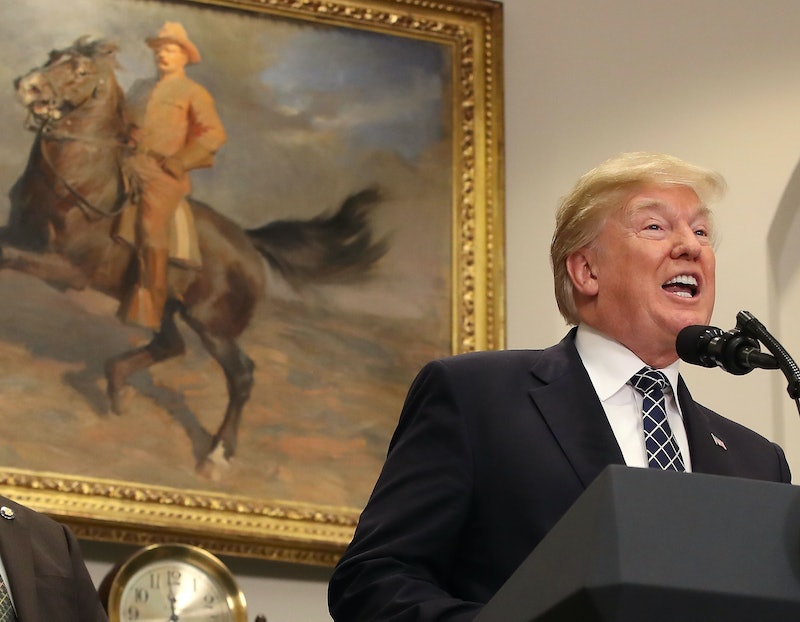 President Trump responded to his now infamous "sh*thole countries" remark by declaring himself the "least racist person you have ever interviewed" to reporters. But that doesn't have everyone convinced. Commenters on Twitter — those famous and not so much — have noted that the kind of person who declares themselves "least racist" is probably actually a racist.

Television anchor and host Soledad O'Brien retweeted an article about Trump's comments and then wrote, "Every racist I've interviewed says this very thing." She was joined by many, many others who noted that Trump may be the "least racist person he knows, given the company he keeps."

Just to recap, Trump was quoted as referring to countries like Haiti, El Salvador, and countries in Africa as "sh*thole countries." That led to near universal condemnations from the UN, African Union, and several individual countries. The president has claimed he did not use that language in the discussions, which were framed around immigration. Others present, including Sen. Dick Durbin of Illinois, have reiterated that he did.

That prompted the latest "is he racist" debate. Trump was asked by reporter April D. Ryan directly if he is one at the Martin Luther King, Jr. Day proclamation signing.

He was asked about the "sh*thole" comment and then Ryan shouted out the question, "Mr. President, are you a racist?" Trump did not respond.

But on Sunday he did. He was arriving to one of his private golf clubs with House Majority Leader Kevin McCarthy and he was asked again. This time Trump responded clearly, "No. I’m not a racist. I’m the least racist person you will ever interview."

Duke is a former leader of the KKK who endorsed Trump during the presidential election. Trump did not immediately disavow the endorsement but rather claimed not to know who he was (despite having referenced him in prior interviews).

The criticism was endless. The New Agenda President Amy Siskind pointed out the other things that he is (according to himself). She retweeted an article and added, "*stable *a genius *like, really, smart."

Justin Hendrix, a reporter at NYC Media Lab, quoted the president and then added, "In fact, you are a white supremacist."

And that's just a sampling from Twitter. The media even ran down exactly what Trump has done over the years that could be considered as racist. In the opinion section of The Times, David Leonhardt and Ian Prasad Philbrick ran down everything that could be seen as racist since he was first sued for trying not to rent apartments to African-Americans.

Twitter users also pointed out what Trump has been up to lately that might not advance his argument. "The self-proclaimed "least racist person" has been tweeting a "AMERICAN FIRST!" all weekend, a KKK slogan that the Anti-Defamation League "previously begged him to stop using," Eric Schmeltzer wrote.

The president may not consider himself a racist, but even the most tactful public figures would argue that something is amiss.