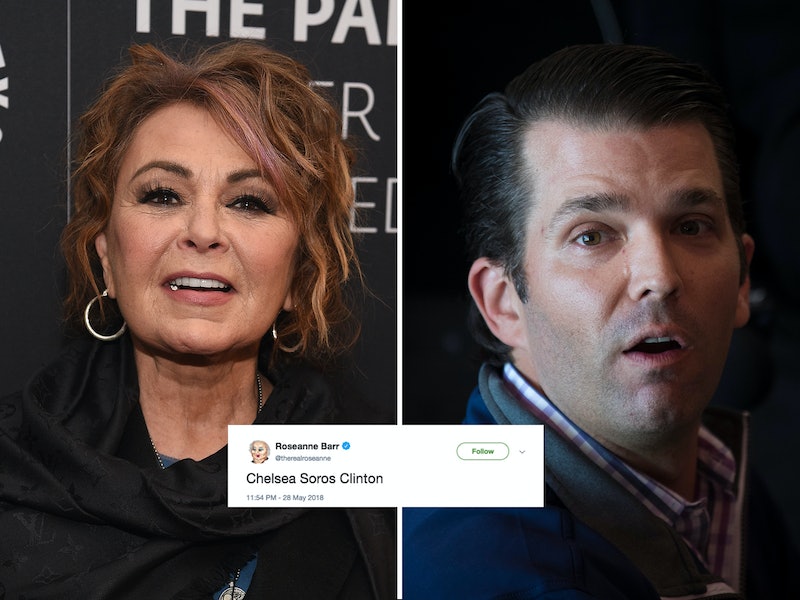 Hours before ABC cancelled Roseanne over a racist tweet the sitcom's star posted, the president's oldest son promoted another of the actress' Twitter rants. Donald Trump Jr. retweeted Roseanne Barr's conspiracy theory-laced rant directed at Chelsea Clinton and billionaire investor George Soros, who she called a "Nazi." Trump Jr. notably left the retweets up after Barr's initial posts were called out, and after her online behavior brought an end to her namesake show's reboot.

What prompted Barr's feud with Clinton is unclear, but her tweets began by calling the former first daughter "Chelsea Soros Clinton" and falsely claiming Clinton was married to one of Soros' nephews. When Clinton responded that she was not, in fact, married to anyone from the Soros family, Barr mocked her:

"Sorry to have tweeted incorrect info about you!I Please forgive me! By the way, George Soros is a nazi who turned in his fellow Jews 2 be murdered in German concentration camps & stole their wealth-were you aware of that? But, we all make mistakes, right Chelsea?"

Barr was spreading a false right-wing conspiracy theory that Soros conspired against Jews in Nazi Germany — and Trump Jr. shared that falsehood with his nearly 3 million followers.

It didn't stop there, though. Trump Jr. later retweeted a second post from Barr attacking Soros. That tweet claimed Soros' goal is to overthrow America's "constitutional republic by buying/backing candidates 4 local district attorney races who will ignore US law & favor 'feelings' instead-and call everyone who is alarmed by that 'racist'."

Ironically enough, Barr was called "racist" by much of the internet just hours later. In an unrelated post, the actress wrote, "Muslim brotherhood & planet of the apes had a baby=vj,” reportedly referring to Valerie Jarrett, a former senior advisor to President Obama.

While Barr publicly apologized for that tweet and deleted it, the tweets about Soros and Clinton remained up. In her first apology tweet, Barr said she would be leaving Twitter.

Barr did also tweet an apology to Clinton correcting herself for saying she's married to someone in the Soros family. "I'm sorry-Chelsea Clinton IS NOT married to a nephew of George Soros-i apologize for the mistake!" However, she then tweeted a link to a Snopes article about Clinton's father-in-law that read (in all caps):

"CORRECTION: CHELSEA CLINTON IS NOT MARRIED TO A SOROS NEPHEW. HER HUSBAND IS THE SON OF A CORRUPT SENATOR, SO SORRY!"

ABC announced that it was cancelling the Roseanne reboot following the tweet directed at Jarrett, but Barr's rant toward Clinton is further proof she didn't have a filter online.

Trump Jr. was apparently already a fan of her show, and congratulated Barr on the reboot back in March. "Wow amazing," he tweeted at Barr. "Congrats @therealroseanne. If you’re not too busy already maybe work in a late night show too... seems there’s some demand for an alternate viewpoint."

Barr's character in the Roseanne reboot was a Trump supporter, and the White House confirmed that President Trump called Barr to congratulate her on the show after it aired. Barr had previously defended Trump in an interview with The New York Times, claiming the president's not homophobic and that Vice President Mike Pence is more radical that Trump.

She told The Times she wanted her character to be a Trump supporter because "it’s an accurate portrayal" of working-class America. "We’ve been in wars for a long, long time, which everybody seems to forget — but working class people don’t forget it because their kids are in it," she said.

Neither Trump nor Trump Jr. have yet to comment on Barr's showing being cancelled nor her Jarrett tweet. It's clear from Trump Jr.'s retweets that he at least enjoyed her online attacks aimed at Clinton.