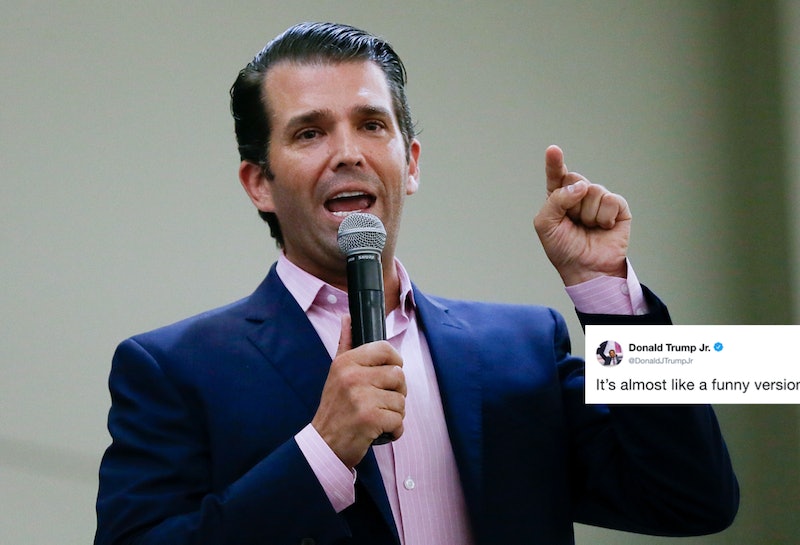 The president's oldest son often uses Twitter to blast his opponents, but on Thursday he inadvertently owned himself. Donald Trump Jr. apparently thinks SNL is called "Saturday And Live," based on his reference to the show in a tweet that called it "S&L."

Trump was responding to a user who criticized the platforms on which many Democratic presidential candidates are campaigning, including their calls for Medicare For All. "This is basically a right wing parody of a dem platform and it's real," the user wrote. Embedding that tweet, Trump replied: "It's almost like a funny version of an S&L skit."

Trump was undoubtedly referring to the comedy show that constantly makes fun of his family. The problem, of course, is that the abbreviation for that show is SNL, and that's because it stands for Saturday Night Live — not "Saturday And Live."

Twitter users were quick to jump on the error and roast Trump. "Keep this up and 'S&L' is going to have to start portraying Eric as the smart one," wrote one user. SNL often parodies Eric Trump (played by Alex Moffat) as a dimwitted nuisance that his older brother (played by Mikey Day) has to babysit. Others joked that Trump's tweet could have been referring to an electric company or the Savings and Loan crisis.

That crisis occurred in the '80s and '90s when S&L depositors withdrew their money in huge numbers, leading to the failure of thousands of S&Ls and a massive taxpayer bailout. "Why did taxpayers bail out S&L in the 1980s?" writer Jonathan Chait joked on Thursday. "Granted the show was funnier then, but still a questionable use of taxpayer dollars."

No current SNL cast members seemed to have joined the roast as of early Thursday afternoon, '08-'17 cast member Bobby Moynihan weighed in with a simple reply to Trump's tweet: "You dummy."

Many current writers jumped in, too, with one referencing show producer Lorne Michaels: "Wait till I tell my boss, Porne Michaels, about this one!!" Another suggested that he'd just gotten an idea for a new sketch: "In fairness, a guy who truly loves his private health insurance company is a decent pitch."

As Vulture points out, Trump is a New York native (SNL has been based in New York City for its entire 44-year history) — plus he referenced a famous Adam Sandler skit in 2011, long before the show made him and his family a target. He should really know its name. Then again, he's tweeted many a snafu in the past, so maybe Twitter just isn't his platform.

At least the show now has one more piece of material with which to make fun of the eldest Trump. Not that it really needed more fodder: SNL has already parodied his statements about the Trump Tower meeting, his reaction to a chaotic White House, and feelings about the Mueller investigation. Viewers will soon find out whether the show has some "S&L" jokes up its sleeve; the next episode of SNL will premiere this Saturday at 11:30 p.m. ET.