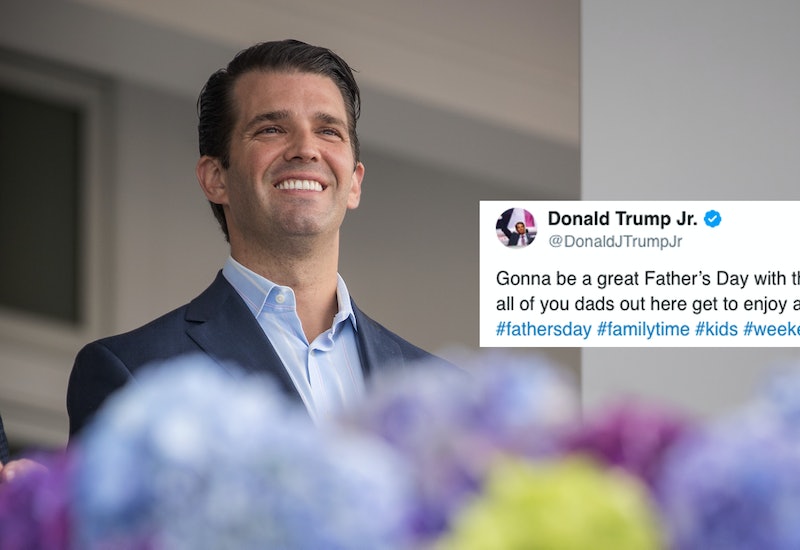 Father's Day — unlike, say, Columbus Day — isn't exactly a controversial holiday. Presidential son Donald Trump Jr., though, has a way of pulling controversy out of even the most innocuous events, at least according to his Twitter followers. Trump Jr.'s Father's Day tweet is drawing backlash from multiple sides, and it's an occurrence that's starting to feel like a pattern since his father took office.

"Gonna be a great Father’s Day with these little monsters," Trump tweeted, along with a picture of himself and two of his children in a swimming pool. "Hope all of you dads out here get to enjoy as much as I will."

The tweet got a fair share of well wishes and compliments on the photo. That, however, came accompanied by numerous people pointing out the fact that Trump Jr. shared this message at a moment when one of the top stories in the news is how his father's administration is forcibly separating families at the southern border, as the New York Times described.

"Let's seize them and throw them in a cage in an abandoned Walmart. What do you think about that?" wrote one Twitter user, referring to Trump Jr.'s kids and the Walmart now acting as a shelter for 1,500 migrant children, as the Washington Post reported.

"How unfortunate for those kids your dad hides in cages. There's no father's day for them. Unlike your little monsters," another Twitter user wrote, referring to the same situation.

"Fun Fact: Research shows that absence of a jailed parent can lead to emotional, behavioral and mental-health issues for children," wrote another. This wasn't just a made-up statement, either — the American Academy of Pediatrics released a statement calling on the administration to stop the practice because of the emotional trauma it causes to children.

This wasn't the only Trump administration policy that drew ire, however. One person brought up how the administration had "[slashed child healthcare budgets" and then offered an admonition to Trump Jr., saying "Shame on you, if you have any shame."

Others pointed out that Trump Jr.'s tweet comes from a fairly privileged position — that of a father able to have the Sunday off. "Much love to all the dad's [sic] WORKING this weekend, not all dad's [sic] get weekends off," wrote one Twitter commentator in response.

Still others took things more generally. "The level of willful ignorance here is beyond belief," wrote one responder. After all, this isn't the first time that Trump Jr. has posted a tweet that others called tone deaf or out of touch. Trump Jr.'s tweet about self-awareness regarding the sexual assault case that recently engulfed former New York attorney general Eric Schneiderman, for example, drew criticism because of the lingering sexual harassment allegations against his own father (which President Trump has repeatedly and categorically denied).

The bulk of the negative responses to Trump Jr.'s tweet in this case did focus specifically on the children being separated from their parents at the border, though. One commentator essentially summed up all of the other comments, saying, "Must be nice to spend Father's Day with your kids as opposed to worrying if you'll ever see them again. You [sic] empathy is historic."

As a public figure and a member of an extremely polarizing political family, it's natural that Trump Jr.'s statements on social media would get ripped apart by his detractors, no matter what the occasion. With this particular tweet and this particular news week, though, the juxtaposition led to some pretty pointed commentary. Perhaps next year, Father's Day will return to its normal, uncontroversial status.