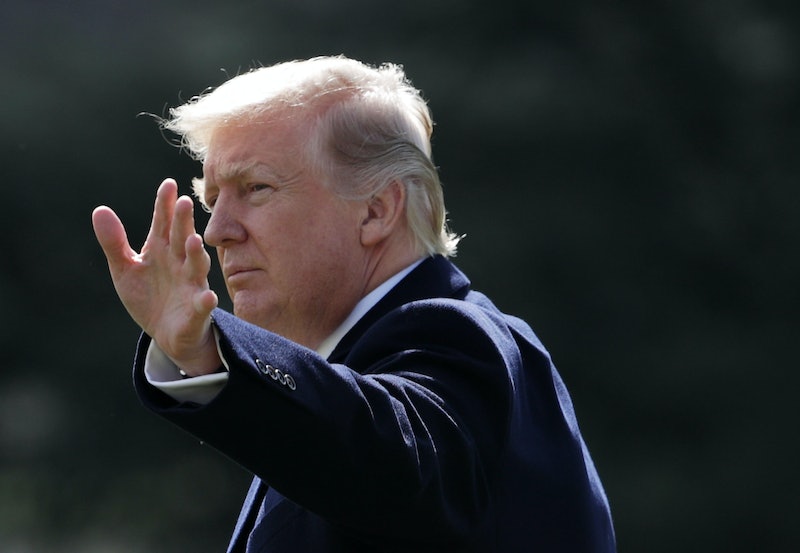 It's no secret that President Donald Trump doesn't get much exercise. During his presidential campaign, he told TV host Dr. Oz ― in a rather surreal episode of television that obscured the fact that he never actually released his medical records ― that he got his workouts by waving his hands and arms during his campaign rallies. But according to a new piece by Evan Osnos in The New Yorker, the president actually has a radically odd perspective on fitness and human health. Basically, Trump doesn't exercise because he believes it's bad for your health to do so.

Noting that Trump's height and weight were reported during the campaign as 6 feet 3 inches and 236 pounds, respectively, Osnos wrote that Trump regards the human body as being like a battery with a limited supply of juice. And exercise, therefore, is little more than a fast-track to the grave.

As Julia Belluz detailed for Vox, the "Trump thinks his body is like an iPhone running low on charge" theory was first advanced in a 2005 book titled Trump Revealed, which relays the story of him chastising one of his executives in the casino industry for training for a triathlon:

Trump believed the human body was like a battery, with a finite amount of energy, which exercise only depleted. So he didn’t work out. When he learned that John O’Donnell, one of his top casino executives, was training for an Ironman triathlon, he admonished him, "You are going to die young because of this."

This is far from the first time Trump has advanced an interesting theory regarding health. During the campaign, when his diet came under scrutiny, he offered up a defense by insisting to CNN's Anderson Cooper that places like McDonald's offered safer food than could be found in traditional restaurants:

One bad hamburger, you can destroy McDonald’s. One bad hamburger, you take Wendy’s and all these other places and they’re out of business. I’m a very clean person. I like cleanliness, and I think you’re better off going there than maybe someplace that you have no idea where the food’s coming from. It’s a certain standard.

And, of course, there's his well-known penchant for well-done steaks doused with ketchup.

For the record, there's no reason to believe the president is in poor health, except for the fact that he declined to publicly release his records other than the infamous one authored by his gastroenterologist, Dr. Harold Bornstein. But the current president seems to believe that not exercising is all to the greater benefit of his physical health.

More like this
Dyson Is Dropping Futuristic, Air-Purifying Headphones
By Rachel Lapidos
Celine Dion Reveals She’s Been Diagnosed With Stiff Person Syndrome
By Jake Viswanath
Melissa Barrera On Anxiety, Aloe Vera & Finding Self-Love
By Brittany Leitner
Emily Ratajkowski Believes You Should, In Fact, Get Bangs
By Rachel Lapidos
Get Even More From Bustle — Sign Up For The Newsletter