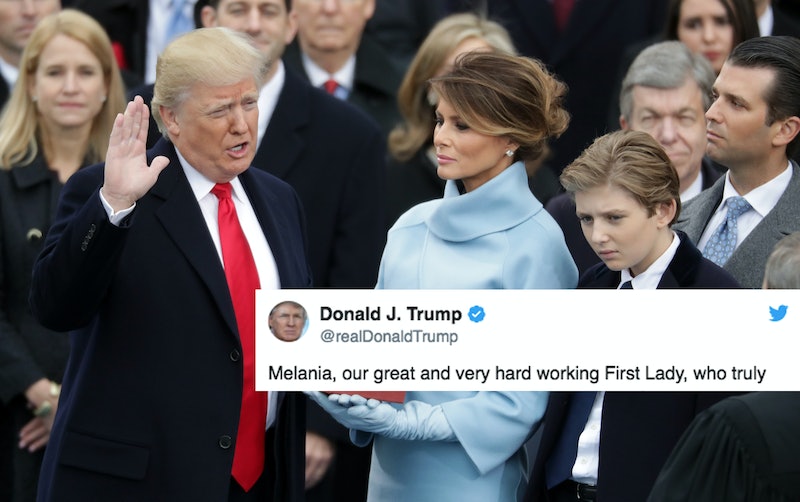 If there's anything President Donald Trump really, really, really wants you to know, it's that Melania Trump totally enjoys being first lady, and there's no reason whatsoever you should question that. That was the big takeaway from a tweet Trump sent out on Tuesday morning, insisting that his wife always knew he would win the 2016 presidential election, and that she "truly loves" what she is doing.

If you're inclined to think that Trump's tweet was spurred by something, it's probably fair to assume he was reacting to a recent article Vanity Fair article suggesting much the opposite. Written by Sarah Ellison, and titled "'She Didn't Want This Come Hell Or High Water': Inside Melania Trump's Secretive East Wing," the piece makes the case (through a source close to the first lady) that not only did she probably not expect her husband to win the presidency, she did not want to find herself in the high-profile, highly visible position she occupies today.

In other words, the report suggests that the precise opposite of what Trump tweeted on Tuesday morning is true. Calling his wife "our great and very hard working First Lady," he insisted ― without ever mentioning the Vanity Fair piece ― that everything is peachy-keen for him on the home front.

The Vanity Fair piece is long on stories that could definitely be seen as embarrassing to the president, perhaps none more so than the claim of a longtime family friend that his wife is unhappy being first lady, and that she probably didn't think he'd actually defeat Hillary Clinton to secure the presidency.

"This isn’t something she wanted and it isn’t something he ever thought he’d win," the friend reportedly told Vanity Fair. "She didn’t want this come hell or high water. I don’t think she thought it was going to happen."

Melania notably did not move into the White House immediately following her husband's inauguration, instead staying at Trump Tower in New York City through the summer, at a cost of millions of dollars to American taxpayers. She did finally move to Washington, D.C. in June, making good on plans to make the trip after her son Barron finished out his school year.

The Vanity Fair piece also reports that Melania is protective of Barron, and has been particularly so since the slew of allegations of sexually predatory behavior that came out in the final months of the election. The president has vehemently denied the claims, calling his accusers "horrible liars."

For the record, the first lady is reportedly very unhappy with the Vanity Fair piece, and contests its veracity. In a statement to Fox News and CNN, Melania's office reportedly blasted the story as "riddled with unnamed sources and false assertions," and insisted it was "meant to demean Mrs. Trump" rather than acknowledging her work. A statement read:

As a magazine tailored to women it is shameful that they continue to write salacious and false stories meant to demean Mrs. Trump, rather than focus on her positive work as First Lady and as a supportive wife and mother. As has been stated on the record many times before, she is honored by her role.

Needless to say, she isn't alone in denying the veracity of the story, as made clear by the recent presidential tweet insisting that the discord Vanity Fair piece alleges is non-existent. Notably, two of the next three tweets President Trump sent out on Tuesday were retweets of the first lady, including one celebrating the new White House Christmas decorations. In other words, the official response to this story seems pretty clear: nothing to see here.