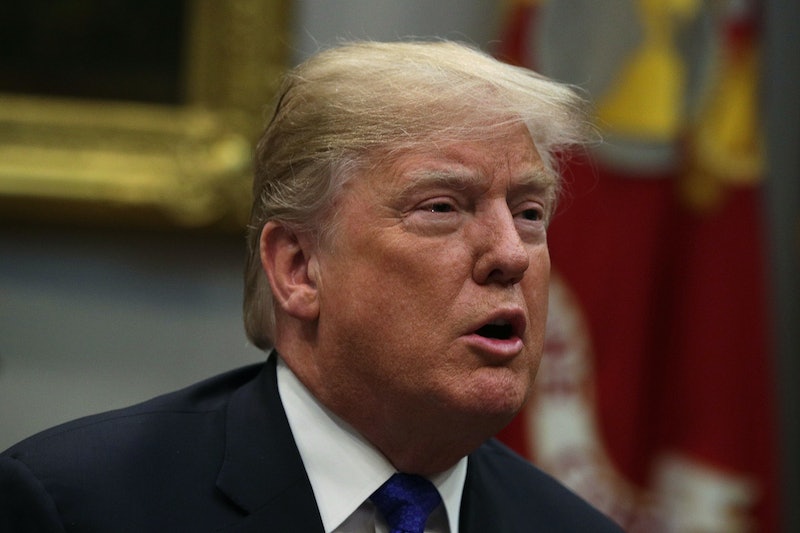 Journalist Michael Wolff's new book, Fire and Fury: Inside the Trump White House, went on sale early Friday morning, despite a cease-and-desist letter sent by Donald Trump's lawyer to both Wolff and his publisher, Henry Holt & Co., which called the book a work of "actual malice." Not even one year into his presidency, it appears Donald Trump is attempting to ban a book. Here's why that's so frightening.

Fire and Fury is the product of Wolff's time as a "fly on the wall" during Trump's campaign and the early months of the administration. The author reportedly based the book on over 200 insider interviews with Donald Trump, Steve Bannon, and other White House staffers. On Thursday, Trump denied granting Wolff access to his presidency, instead claiming that he "authorized Zero access to White House" for the journalist.

Taking its name from one of Trump's many overheated responses to North Korean leader Kim Jong-un, Fire and Fury is responsible for many of the latest headlines about the Trump White House, including the revelation that no one in the Trump campaign, not even Donald J. Trump himself, expected — or wanted — victory in the 2016 election. The book quotes Steve Bannon, who said that investigators were "going to crack Don[ald Trump] Jr. like an egg on national TV," a statement that earned Trump's former right-hand man his own cease-and-desist letter, and prompted a response from Trump himself: "Steve Bannon has nothing to do with me or my presidency."

Fire and Fury: Inside the Trump White House by Michael Wolff, $20.98, Amazon

The letter sent to Wolff and Henry Holt & Co. by Trump's lawyer demands that the author and publisher "immediately cease and desist from any further publication, release or dissemination of the book," on the grounds that it is a work of "actual malice": a legal term defined by the Supreme Court of the U.S. as a piece of journalism that is either known by the author to be false at the time of publication, or one that was written and published with "reckless disregard for the truth." In order for a public figure to win a libel suit against a reporter, they must prove that the report in question meets the above criteria, but that's difficult to do. If Jerry Falwell couldn't bring a successful libel suit against Hustler for saying that he committed incest with his mother in an outhouse, it's unlikely that Trump will be able to take down Fire and Fury by the same means.

What's more concerning here is that Trump attempted to exercise prior restraint against the press, an action that has long been held in conflict with the First Amendment, and has been rejected numerous times by the Supreme Court. Trump's cease-and-desist letter smacks of a similar route taken by then-President Richard Nixon in 1971, when he tried to halt the publication of the Pentagon Papers — an insider's look at the harsh realities of the Vietnam War — in The New York Times and The Washington Post. SCOTUS ruled against Nixon, and the Papers went public on June 30 of that year.

As New York Magazine points out, Trump's case against Wolff and Fire and Fury inhabits a unique legal, social, and political space, but his attempt at prior restraint is inexcusable:

Yes, technically Trump was issuing threats as a private individual, and claimed the book was clearly libelous (despite the incredibly high standards the courts have traditionally maintained for claims of libel against public officials). But when the most powerful man in the world threatens a writer and a publisher, these are flimsy pretexts for what is at best an act of intimidation, and at worst a notice to the world at large aimed at chilling the free expression of opinions contrary to the whims and interests of the Leader.

But, then again, perhaps the First Amendment is difficult to follow for a man who allegedly rolled his eyes at learning the Constitution.

Fire and Fury: Inside the Trump White House is available now from Henry Holt & Co.