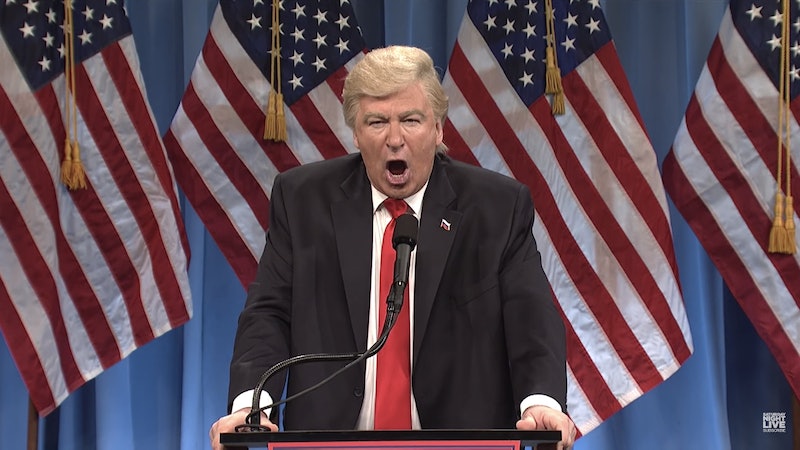 Donald Trump sued everyone in the latest Saturday Night Live skit featuring Alec Baldwin's impression of the president. Well, at least the federal judges who fought to maintain the block on his travel ban this week and a manager at Nordstrom. SNL definitely captured Trump's penchant for suing his opponents with this segment.

Baldwin's Trump entered a spoof version of The People's Court as a dramatic narrator explained the case: "This is the plaintiff, the President of the United States. He claims that some phony judges are being very mean to him. He's asking for broad, unchecked power. Will he get it?" Trump's accusation of the judges was described as "letting bad hombres pour into this country" and being guilty of "I guess, knowing the Constitution...?"

The segment mocked Trump's continuing friendliness toward Vladimir Putin by having him serve as a character witness; his sexism by having him refer to the female judge as a "flight attendant;" and his general inability to defend the ban on refugees and travelers from seven Muslim-majority countries. "It's so simple," started his defense of the executive order. "The bad people, they're pouring in and you see them and it's ISIS and San Bernardino and Chicago. I mean, look at Chicago, it's hell. They're bad dudes coming in here, bad hombres, bad boys, bad boys, what'cha gonna do?"

Three judges from the 9th U.S. Circuit Court of Appeals unanimously decided to maintain the block on Trump's travel ban on Friday. The president soon after tweeted, "SEE YOU IN COURT, THE SECURITY OF OUR NATION IS AT STAKE!" It isn't difficult to imagine the real Trump comporting himself similar to Baldwin's depiction in court.

The skit ended with a summary of the upcoming case being between the president and a Nordstrom manager. Trump tweeted about his daughter Ivanka, whose brand was recently dropped by the retailer, on Wednesday, saying that the chain was treating her "so unfairly" and that the situation was "Terrible!" He tweeted about her again on Saturday, praising her for holding her head "so high" despite being "abused and treated so badly by the media." The reaction was likely sparked by a widely-circulated report by the Wall Street Journal revealing her brand's sharp decline in profits over the previous year, which transpired even as Nordstrom's sales rose.

So while Trump's reactions have so far been limited to social media, very few people would probably be shocked to see something similar to the parodied scenario happening in real life.