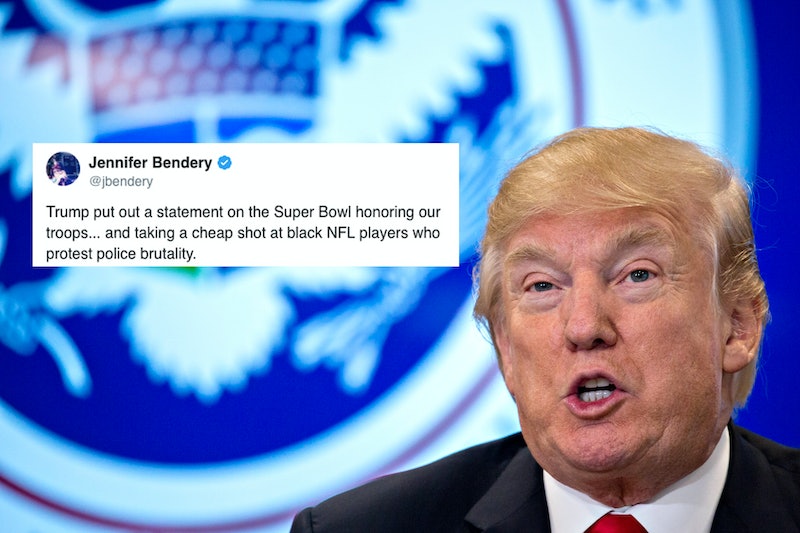 Instead of rooting for the New England Patriots or the Philadelphia Eagles, President Donald Trump made a statement about the Super Bowl on Sunday that's already causing controversy. He referenced the take-a-knee protests that some NFL players have been participating in to protest police brutality against people of color in the United States. Trump has been a vocal critic of the peaceful demonstrations, and Super Bowl Sunday was no exception.

"Though many of our nation's service members are unable to be home with family and friends to enjoy this evening's American tradition, they are always in our thoughts and prayers," Trump said in a statement issued on Sunday. He added:

We owe these heroes the greatest respect for defending our liberty and our American way of life. Their sacrifice is stitched into each star and every stripe of our Star-Spangled Banner. We hold them in our hearts and thank them for our freedom as we proudly stand for the national anthem.

Trump has said some harsh things about the NFL players involved in the protests, which began with 49ers' Colin Kaepernick in 2016. When speaking to a crowd in September 2017, Trump said, "Wouldn’t you love to see one of these NFL owners when somebody disrespects our flag, to say, ‘get that son of a bitch off the field right now. He is fired. He’s fired!'"

The president has misinterpreted the take-a-knee protests as an attack on the American flag and U.S. troops, but that's a misunderstanding of the movement. In fact, Kaepernick addressed this very issue when he first started protesting during the national anthem at games.

Kaepernick originally protested police brutality by sitting down during the national anthem, but after meeting with former Seattle Seahawks player Nate Boyer, who served as a Green Beret in U.S. military actions in both Afghanistan and Iraq, Kaepernick and his teammates started kneeling.

"After hours of careful consideration, and even a visit from Nate Boyer, a retired Green Beret and former NFL player, we came to the conclusion that we should kneel, rather than sit, the next day during the anthem as a peaceful protest," Kaepernick’s then-teammate Eric Reid wrote in an op-ed for the New York Times. "We chose to kneel because it’s a respectful gesture. I remember thinking our posture was like a flag flown at half-mast to mark a tragedy."

Boyer had written an open letter in the Army Times in which he said that if he had "noticed my teammate sitting on the bench, it would have really hurt me." But he also said he respected what Kaepernick and the other players were trying to do.

"I’m not judging you for standing up for what you believe in. It’s your inalienable right. What you are doing takes a lot of courage, and I’d be lying if I said I knew what it was like to walk around in your shoes," he wrote. "I’ve never had to deal with prejudice because of the color of my skin, and for me to say I can relate to what you’ve gone through is as ignorant as someone who’s never been in a combat zone telling me they understand what it’s like to go to war."

After the story was published, Kaepernick reached out to Boyer to meet with him. "We sorta came to a middle ground where he would take a knee alongside his teammate," Boyer said. "Soldiers take a knee in front of a fallen brother’s grave, you know, to show respect. When we’re on a patrol, you know, and we go into a security halt, we take a knee, and we pull security."

He explained that Kaepernick was very careful about being respectful of the troops. "It was really cool to hear him just listen, too, and be very open-minded, too, and [say] 'Look, I don’t want to hurt you, I don’t want to hurt your brothers and sisters.'" By taking a knee, Kaepernick and Boyer found "common ground." The NFL players could protest police brutality, without being disrespectful to the troops.

The then-quarterback explained that what the troops fight for — liberty and justice for all — was not being delivered. "People are dying in vain because this country isn’t holding their end of the bargain up, as far as giving freedom and justice, liberty to everybody," he said. "That’s something that’s not happening. I’ve seen videos, I’ve seen circumstances where men and women that have been in the military have come back and been treated unjustly by the country they have fought for, and have been murdered by the country they fought for, on our land. That’s not right."

The reason Kaepernick chose to protest during the national anthem was because, he said, he wasn't "going to stand up to show pride in a flag for a country that oppresses black people and people of color." Trump's statement on Sunday shows that he still doesn't agree.