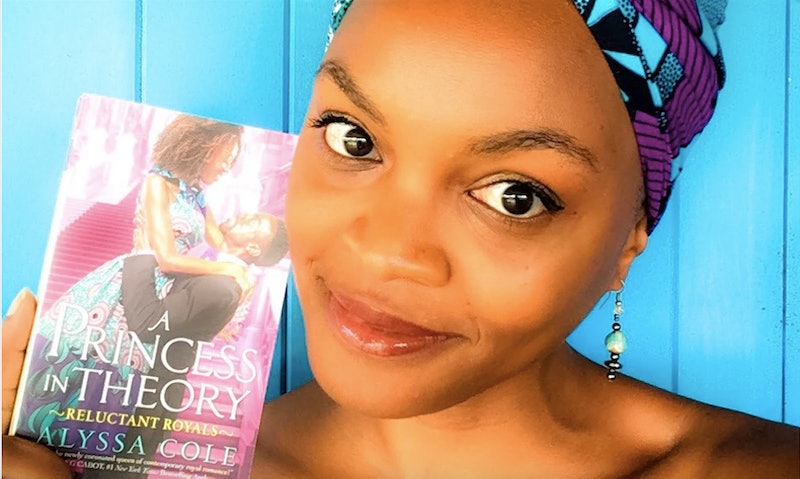 The first story I remember writing (though my mom insists my writing career began at age 2) is from when I was about 7 years old. I showed the colored pencil drawing and accompanying block of text (which was never finished, thus pretty in line with my actual working style until recently) to my parents and explained that it was about “a princess who saves the prince.” I was a girl who loved fairy tales, from Grimm’s to Disney, and had delusions of Happily Ever After grandeur despite my extreme nerdishness, inability to walk without tripping over my own feet, and tomboy style that was as far from ballgowns and tiaras as you could get — despite the fact that none of the princesses I watched and read about looked like me or my sisters or my friends.

Years later, when I was inspired to write my own princess story, A Princess In Theory, I felt like the tides had shifted. Princesses were a tool of the patriarchy. They were an outmoded concept designed to keep girls from reaching their true potential. I couldn’t help but be irked at all of the memes and articles about how princesses were canceled, when in fact only one very specific subset of women had ever had the chance to be restricted by and throw off the mantle of princesshood in the first place.

Most black and brown girls had rarely been invited to magical lands where we were offered supreme power (and true love). We’d grown up with Aurora and Belle and Ariel, and our communal brown princess Jasmine. We were eventually blessed with the OTC (one true Cinderella) Brandy Norwood in an ABC television special, but when black girls finally got their Disney princess on the big screen, it was like an evil genie wish — she was in frog form for most of the movie. I love Tiana and all that she represents, but even a wish fulfillment fantasy seemed to think that showing a black woman, in a black body, making her way toward her happily ever after was impossible.

So it annoyed and perplexed me when I saw the sudden rejection of the pop culture princess phenomenon. It seemed to me that (mostly) white women, who’d grown tired of the fantasy that was at its base — the idea they could be given their wildest dreams and a crown to boot — had made a unilateral decision that this wasn’t what women needed, without considering the malnourished fantasies of millions of black and brown girls.

I’m a feminist (intersectional or GTFO). I obviously believe that women and girls should be encouraged to go into STEM and explore every option available to them. I worked as a science editor myself, and my heroine in A Princess in Theory, Naledi Smith, is an epidemiologist who finds out that the spam mail she’s been receiving about being betrothed to an African prince wasn’t a scam. One aspect of the book is the hero, Prince Thabiso, struggling with the weight of his role as a leader of his people, and Ledi figuring out if this is something she wants in her life.

It seems to me that the idea of princesshood has been flattened in an entirely unhelpful way. Reducing it to “a woman who gets saved by Prince Charming” erases all of the agency that a nuanced inspection of the princess fairy tale reveals. In A Duke by Default, the second book in my Reluctant Royals series, the heroine Portia gets annoyed by this trivialization as well:

People focused so much on the prince slipping on Cinderella’s lost shoe that they didn’t realize the real happily ever after was the moment she realized she was brave enough to go to the damned ball alone in the first place.

Like Portia, I also won’t tolerate princess slander. I understand all the evils of the monarchy (and when people assume that WOC don’t, that says a whole lot). I understand how stories shape the consciousness of young girls and femmes. That’s exactly why the princess fantasy is far from frivolous for women of color, so many of whom grew up in societies that told them they weren’t beautiful or wanted — that the happily ever after ending was not for them. They are taught different stories, ideas absorbed by their absence after “Once upon a time,” in which their greatest value is in how much they can endure or how useful they are to others. The power of fairy tales is exactly why we need more princess stories — black princesses, Asian Princesses, queer princesses, trans princesses.

Every young girl should know that in the many fantasy worlds they can escape into, there are places where they are beautiful and strong and wise. Where they can wear a crown and a lavish gown and save the day, too. Why not both?

Bustle’s Royally Fascinated series is all about owning our obsession with princesses — and exploring why that's an empowering thing.