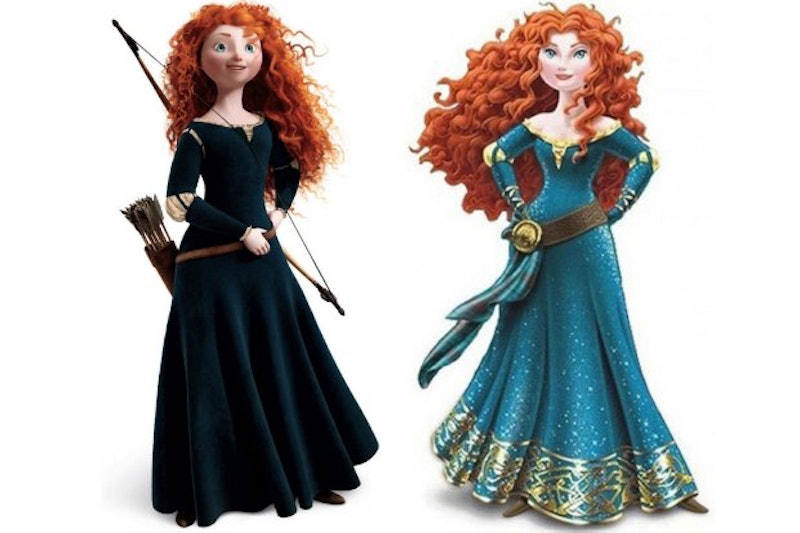 Dear Little Girls Everywhere: You are not a princess. Life is not a fairytale. The future is here and it's full of sports, wild hair, and the hard sciences. At least, it can be, if that's what you want.

Of course, the future could have held these things for you back in 2012, too, but in 2013 the Mad Men of the Internet Age caught up to the notion and unleashed upon the masses a string of anti-princess ad campaigns for little girls. And when they didn't, the Internet revolted. That's right, Little Katnisses, the revolution is brewing and a shattered glass slipper might just be its mockingjay.

Skeptical? Just let the evidence speak for itself.

Earlier this year, GoldieBlox had its official debut. If you managed to miss the awesome viral commercial (check it out above) or even cooler story, here's the short version: The company was started by engineer and entrepreneur Debbie Sterling, who wanted to create a toy that would get girls interested in engineering. According to the GoldieBlox website, only 11 percent of engineers worldwide are women, so it's a noble and necessary pursuit. The Internet agreed, and within just four days Sterling's Kickstarter campaign had raised enough money to start production on GoldieBlox.

Sure, GoldieBlox faced a little controversy when the Beastie Boys objected to its appropriation of "Girls" for the viral ad campaign, but that hiccup doesn't change the fact that GoldieBlox tapped into a very real desire for toys geared toward girls that encourage something other than tiara-chasing.

When the Catholic Church is schooling us in feminism, well, it might just mean the apocalypse is near.

Okay, so it's not exactly the Catholic Church, per se, but Louisville's Mercy Academy is a Catholic school. The all-girls institution gained national attention this year when it unveiled a new ad campaign encouraging girls to enroll at Mercy to "prepare for real life." The tagline underscored ads featuring glass slippers, princes, and princesses and politely (but very directly) reminded girls that fairytales don't come true and, in the real world, it's better to plan on rescuing yourself. I'm not usually prone to religious outbursts, but amen to that.

So we've got career aspirations and real world expectations taken care of, but what's left? What else could possibly drive a nail into Princess Culture's coffin? How about a backlash from the public over the princess-ification of a beloved animated character?

In 2012, Disney and Pixar released Brave , a princess movie that challenged what a princess movie had to be. The heroine, Merida, was wild and tomboyish and defiant, and as jealousy-inducing as her hair may have been, it was unkempt and decidedly un-princessy. At the end of Merida's tale, she saves herself and her family and dismisses her would-be Prince Charmings. Brave wasn't perfectly feminist, but it was certainly a step in the right direction.

Cut to 2013, when Disney was ready to induct Merida into its official princess lineup. Just before her "coronation" (because, yeah, Disney has those for its fictional princesses before officially unleashing their official princess merchandise on the world), Merida got a makeover that rivaled Anne Hathaway's Princess Diaries makeover…and the Internet revolted, proving that a sparkly dress and a sash in place of a quiver might actually be the mockingjay of the Anti-Princess Revolution (sorry, shattered glass slipper).

The Change.org petition opposing Merida's new look currently has over 250,000 signatures. While Disney never officially acknowledged their retreat, they did replace Merida's picture on the official Disney Princess website (warning: don't click if you're allergic to pink clouds or glitter) with her original CGI look from Brave, abandoning the glam 2D makeover version.

Obviously, feminism has a long way to go and Princess Culture, like cockroaches and Kardashians, will not be that easy to get rid of, but 2013 marked a few great steps forward in changing the way we indoctrinate young girls. What might 2014 have in store? Little girls forgoing tea parties for chemistry experiments? A female heroine who doesn't just reject romance as her happily ever after, but doesn't have to because it's assumed that something else (like, maybe personal fulfillment or autonomy, perhaps) is the answer? Dare to dream, Internet. It's a wish your heart makes and all that jazz, after all.