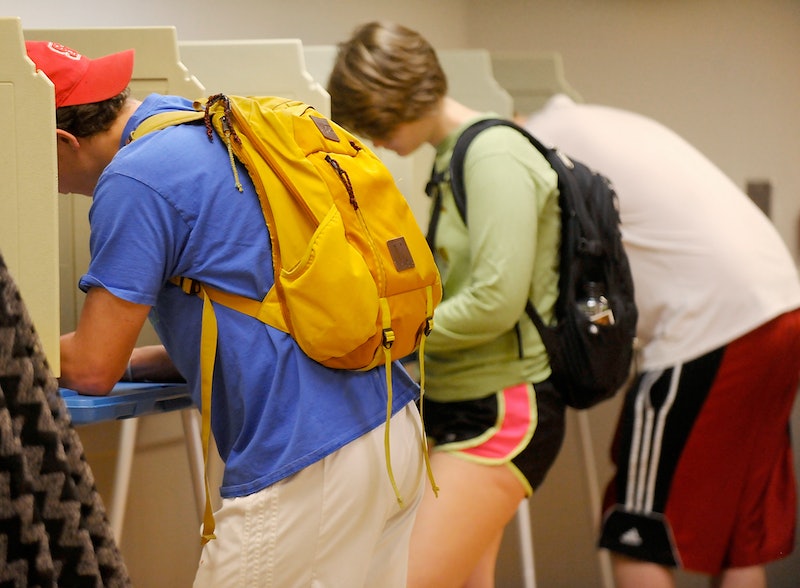 On Monday, the Supreme Court announced that it would not hear a North Carolina voter ID law case, thus leaving in place a lower court ruling that struck down the statute. In 2016, the 4th U.S. Circuit Court of Appeals found the law discriminated against African American voters. The outcome is being heralded as a victory by civil rights groups who oppose voter ID laws on the grounds that they unfairly target voters of colors.

However, according to legal experts, the Supreme Court's decision on Monday is not actually indicative of its approval or disapproval of the policies under question — and civil rights advocates still have a lot of work ahead of them.

Though these laws are often referred to as voter ID laws, they are really much more complex than requiring voters to show a driver's license, Julie Ebenstein, staff attorney for the ACLU's Voting Rights Project tells Bustle. She explains that the North Carolina law cut the total early voting days by a week, eliminated same-day voter registration, and prohibited out-of-district voting on Election Day. "These are seemingly subtle details that we know can have a really dire effect on elections," Ebenstein says.

Bob Phillips, executive director of Common Cause North Carolina, one of the plaintiffs in the case against the voter ID law, tells Bustle that in 2008, when same-day voter registration was enacted, tens of thousands of North Carolina residents, across the political spectrum, utilized that benefit to vote for the first time. He says that doing away with provisions that improved voter access "disenfranchised" potential voters.

"Statistics prove that it has helped to increase voter participation in North Carolina," Phillips says. "And there is no evidence that we have had any wide scale, systematic voter fraud. That's never been proven."

However, the Supreme Court's decision to not review the 4th Circuit's ruling does not make for a full-fledged victory. After all, every term, the Support Court declines to hear about 99 percent of all cases appealed to it, with no announcement as to their intentions for not hearing the case.

Last fall, the justices were split 4-4 on whether to allow the voter ID laws to be put back in effect during the election, since the ruling outlawing them was still under appeal. But even that split doesn’t tell us much about Monday's decision, Ebenstein says.

That "raise[d] a different set of issues. It had to do with changing the rules governing an election too close to the election," Ebenstein says. "That’s a different substantive question from whether the court wants to review the 4th Circuit’s decision. Just because any particular justice or the court in general went one way on whether or not to stay the decision right before an election doesn't necessarily indicate where they stand on whether or not the court should review the substantive issues. They are quite different questions."

"They are constrained, but there are still ample areas, we feel, they can come in and put up barriers that would be against the spirit of the current law."

Moreover, Ebenstein argues we can't read too much into the longer-term voter ID implications from Monday's Supreme Court announcement. "I don’t think it’s appropriate to guess or to predict what this says more long-term about the court," she says. "We wouldn't speculate on who voted which way or why. It’s hard to guess forward-looking or even backward-looking why the court makes one decision and not another."

While Phillips says his organization is pleased the 4th Circuit ruling holds, he still fears that in North Carolina, the Republican-controlled legislature will attempt to pass a new set of laws, that might try to still limit voter rights while staying within the confines of the ruling.

"I think this and other court decisions fire a warning shot from the courts to legislators."

"Some people speculate and say, 'Well, instead of same day voter registration running the full 17-day early vote period and being able to utilize that in any early voting station, they may say it’s only going to be the first three days and we're only going to have it at the main state Board of Elections office," Phillips says of the possible new limitations that may be enacted. "That way they can say, 'We still have early voting. We're still allowing it, but we're just restricting the number of days and places you can do it.' They are constrained, but there are still ample areas, we feel, they can come in and put up barriers that would be against the spirit of the current law."

Ebenstein says that she hopes that legislators seeking to pass voter ID restrictions will be deterred by the Supreme Court's decision, but she is still preparing for more challenges to voter accessibility.

"I think this and other court decisions fire a warning shot from the courts to legislators," Ebenstein says. "Organizations like the ACLU and others are looking at both the laws and the purpose behind the laws. We're going to be the ones to stand up and say that they are unlawful and unconstitutional."