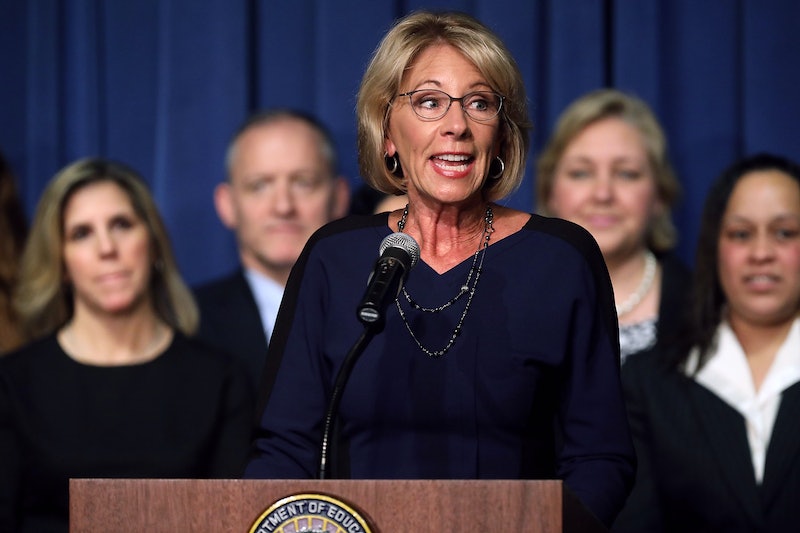 Sunday wasn't a great day for the Department of Education. First, the agency misspelled the name of black civil rights leader W.E.B. Du Bois. Then, while attempting to correct that typo, the department made a second typo, extending its "deepest apologizes" for the error. This is embarrassing stuff — but don't get too distracted by it, because the Department of Education's Twitter misspellings are far from the most egregious thing going on at the agency right now.

Far worse than its error-laden tweets is the Education Department's still-unexplained decision to remove information about the Individuals With Disabilities Education Act (IDEA) from its website. For over a decade, the agency devoted a huge subsection of its website to explaining the protections afforded under federal law to people with disabilities. This was an invaluable resource for students, educators and parents, but around two weeks ago, the website vanished without explanation.

"The Department's failure to keep this critical resource operational makes it harder for parents, educators, and administrators to find the resources they need to implement this federal law and protect the rights of children with disabilities," the Washington senators wrote. "For more than a decade, this website, which was released by President George W. Bush's Secretary of Education Margaret Spellings, has served as a one-stop-shop for resources related to IDEA and its regulations."

This is a microcosm of a larger phenomenon. All too often, important-but-boring stories are crowded out of the news cycle by "scandals" that are outrageous and eye-popping, but ultimately not worth all that much attention. As a result, it's very easy to become distracted by things that don't really matter at the expense of things that do.

To take just one example, Trump sent a tweet in late November criticizing the cast of Hamilton, a tweet that predictably received a ton of attention. What got much less attention was the fact that just one day earlier, Trump paid $25 million to settle his Trump University case. That was obviously the much more important story. But it was drowned out by the chatter about Hamilton.

Just about every day has been a heavy news day since Trump took office. But some news stories are much more worthy of your attention than others, and given the wholly unprecedented nature of Trump's presidency, it's crucial to focus on the substantive ones. We can poke fun at the Department of Education's spelling mistakes, but its decision to remove information about disabled people's rights is a lot more worrisome. We should allocate our attention accordingly.